Women in Solitary: Inside the Female Resistance to Apartheid 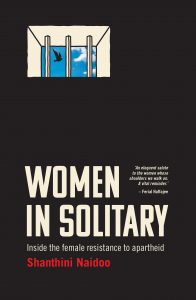 APARTHEID was based on complex legislation, increasingly distanced from the rule of law. Before the National Party regime resorted to lawlessness from the early 1980s onwards, it kept up the pretence, for various reasons, of legality; thus a sequence of trials that attempted to criminalise opposition political activity. One, the trial of Ndou and 21 other defendants charged under the Suppression of Communism Act, took place in Pretoria in late 1969 and early 1970.

Among the regime’s tactics was mass detention of activists from all corners of the country and attempts to show conspiracy to overthrow the State. Exactly who ended up being charged, and who was required as a state witness, was often a matter of chance. Shanthini Naidoo’s book hinges on interviews with four of the women (there had been seven in all) involved in the trial of the 22 – Joyce Sikhakhane-Rankin, Shanthie Naidoo (unrelated to the author), Rita Ndzanga and Nondwe Mankahla – shortly after the funeral in April 2018 of Winnie Madikizela-Mandela, the most prominent of the 1969–70 defendants.

The round-up had taken place in April and May 1969 and it was only in October that charges were brought. They basically involved keeping the underground ANC operational in the late 1960s: distributing literature, selecting potential sabotage sites, and sending activists over the border. The authorities feared that there had been a revival of internal ANC and SACTU activity from 1967, although the evidence was patchy and a case for conspiracy tenuous. The prosecution gave up on 16 February 1970 after Naidoo and Mankahla refused to give evidence for the State. Bizarrely, theirs were the only convictions as a result of the trial, although all those discharged were re-detained until late 1970. So was Naidoo at the end of her two-month sentence. A habeas corpus application by her family predictably failed: the courts had no jurisdiction under the Terrorism Act. There can be no more chilling evidence of the sheer evil of apartheid’s police state.

Activists literally disappeared into a black hole, a limbo of anonymity where they suffered the psychological torture of solitary confinement and sleep deprivation. Assault was commonplace and standing on bricks for hours is mentioned by these interviewees. The consequences endured for decades and, although they were shared by men, women were particularly vulnerable. The mind games imposed on them often involved their children. There is also a mention of gang rape, although no specific evidence is offered. Warders persecuted detainees by deliberate inattention to chronic medication, there was a general lack of hygiene, detainees used the same clothes for weeks on end, and the food was often putrid. Unannounced movement from place to place was designed to induce disorientation; but it is clear from these accounts that solitude was the worst aspect of detention. One means of resistance was singing in African languages, which was both effective and hard to control. Yet there were many thoughts of, even attempts at, suicide.

Naidoo argues that induced paranoia and incapacitation of activists was a main objective. This is all the more plausible since interrogation showed that almost everything that could be offered was already known to the police special branch. Confirmation was required as admissable evidence. The ability of detainees to refuse to testify once they got to court was a powerful weapon, although used at considerable cost including re-acquaintance with police torturers. Whether or not they went to these lengths, most detainees were the foot soldiers of the anti-apartheid struggle and their history is testimony to remarkable and disciplined commitment. Detention was the height of persecution, but aggravation continued for years for those unable to leave the country: harassment, spurious charges and raids that resulted in the permanent loss of personal possessions such as photographs.

Accounts from anti-apartheid activists about imprisonment constitute a genre of their own. But little is available about the jailers, so the chapter on Theuns (Rooi Rus) Swanepoel is particularly valuable. An especially odious character, he intensified interrogation techniques during the mid-1960s with chilling effect after training by the French whose methods in Algeria were notorious. Among his specialities were the use of electricity and suspension from elevated open windows, in addition to general physical brutality. He died of premature senility in 1998, evading any possibility of justice.

There is also a chapter on Madikizela-Mandela. The fact that it seems to be based on a very narrow range of sources may explain why it lets her off so lightly. There is no gainsaying her appalling experiences in prison and further persecution outside it, but a balanced account would look very different from this offering.

Life after detention for the four former detainees is examined at length and includes revealing interviews with children and grandchildren. Naidoo and Tshabalala-Rankin went into exile in Britain and married foreigners, so their offspring have particularly interesting insights. This includes transgenerational trauma. All the detainees faced dislocation and financial hardship and there is a general ultimate sense of having been let down by post-apartheid South Africa. There is also a long critique of the Truth and Reconciliation Commission, again based on limited sources, although the suggestion that forgiveness must be matched by genuine remorse is useful.

A weakness of this book is limited historical context. It is implied that the 1969–70 trial was a key event, but little evidence that it was any more significant than many other trials. And there are some misinterpretations and mistakes: the ANC did not become a non-racial organisation at Morogoro in 1968, but had to wait for the Kabwe conference of 1985; and BOSS was the Bureau for State Security in spite of its catchy acronym. The author’s grasp of British geography is flawed: Barnett is Barnet, Finchley can hardly be described as quaint, and Walmington Fold must surely be a road.

The detentions recorded in the book happened over 50 years ago, so the author has made a significant contribution in recording the memories of women who are now advanced in years. While the general contours of detention are well documented elsewhere, the details of personal experience brought to life in this valuable book continue to add to our understanding. Soon there will be no further first-hand details left to record.