White Malice: The CIA and the Neo Colonisation of Africa 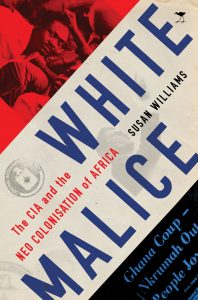 ‘THE AMERICANS were everywhere.’ This was the view of CIA asset Washington Okumu, a Kenyan well-known to South Africans as the man who supposedly brokered the IFP’s participation in the 1994 general election. Indeed, they were: brash and self-confident, well-funded and with one-track minds about the dynamics of the Cold War; and ever ready to label opponents, or even neutrals, as communist.

Susan Williams’s impressively researched book concentrates on central and west Africa in the late 1950s and early 1960s, a period during which European imperialism was rapidly shrinking in its political sense. The Americans were particularly interested in two countries: Ghana and the (Belgian) Congo, which gained independence in 1957 and 1960 respectively.

Ghana led by Kwame Nkrumah was in the vanguard of pan-Africanism, which ultimately envisaged a United States of Africa; and the doctrine of non-alignment. It was a magnet for activists from the African diaspora ranging from grand visionaries to more focused revolutionaries involved in national independence struggles. The Bureau of African Affairs in Accra was set up to assist them. Williams provides vivid descriptions of Independence Day on 6 March 1957 and the equally significant All African People’s Conference the following year. Realistic hopes for pan-Africanism did not last long and were dealt a blow by formation of the Casablanca and Brazzaville groups as early as 1961. The Americans were intensely keen to exploit, influence and often thwart developments, and counter the real and imagined activities of the Soviet Union and its allies. Africa thus became a proxy in the Cold War. But the Americans had a more specific concerns such as the Shinkolobwe uranium mine in Katanga.

This had enabled them to develop the nuclear weapons that had ended World War II. By the late 1950s there were other sources and the Russians had their own, but the Americans still felt it necessary to keep the Soviet Union out of Africa. And there were other strategic minerals such as titanium and cobalt. The Belgian exit from Africa was precipitate, although based on the premise that a pliant regime in Leopoldville would enable continued strategic and economic control. Given the fractured nature of black politics in the Congo and the virtual non-existence of local administrative expertise, this was not an unrealistic hope but for a couple of politicians with national appeal. One of these was Patrice Lumumba, articulate, intelligent, self-sacrificing ‒ and a protégé of Nkrumah.

The CIA set up its Africa division in 1959. Although well-versed in subversion, its more routine work involved influence. This was achieved by surreptitious funding of a wide range of cultural organisations through apparently independent foundations, such as Fairfield. Many well-known African writers, Es’kia Mphahlele and Wole Soyinka among them, and others involved in the creative arts were to discover that they had been involved in some way with CIA-funded bodies. The Congress for Cultural Freedom was one such. Under various innocuous names the CIA ran organisations that fed news reports to unsuspecting clients. It also became involved with the education of promising young Africans; and there were arrangements with publishing houses such as Frederick Praeger. Much of this activity was driven by an American suspicion that non-alignment was cover for Soviet penetration. The Americans had a paranoid tendency to confuse nationalism in its various forms with communism.

Belgian troops returned to the Congo not long after independence to quell an army mutiny and guard economic interests particularly in secessionist Katanga and South Kasai. This was countered by deployment of United Nations troops, les casques bleus, drawn from various African countries. The key figure was always Lumumba and there is a sense that needing a communist adversary to justify interference and intervention, he fitted the American purpose ideally. The evidence held against him was derisory: the use of Russian planes, the odd intemperate speech, his advocacy of pan-Africanism. The communist Lumumba was largely a creation of American fantasy; indeed, he appears initially to have welcomed American support. He was also to make tragic errors of judgement such as trusting the Judas-like Joseph Mobutu, whose coups faithfully served American interests, and failing to deal with those such as Joseph Kasavubu who illegally deposed him. Mobutu, a significant number of army officers and sundry politicians were in the pay of the Americans. So were protestors in staged anti-Lumumba demonstrations. The legal, elected government was moved to Stanleyville by Antoine Gizenga, Lumumba’s ally; which meant that soon the newly independent state had four separate governments.

Lumumba’s fate was sealed by a combination of strategic, economic and political factors. The Americans and their Western allies decided at an early stage that he was an obstacle to their ambitions. By comparison the plans of Nkrumah and Lumumba, such as a union of their two countries with Leopoldville as capital, were fated from the outset. Lumumba’s elimination was planned by the CIA and thus had the approval of President Eisenhower and senior American politicians while high-minded and hypocritical speeches were delivered at the United Nations, where the CIA and FBI had long been interfering. For decades all confidential communication in and out of the UN was read by the Americans who had a back door into its CX-52 cipher machines.

The exact role of the CIA in Lumumba’s murder remains unclear, but there is much that is suggestive. Poisoning and shooting were arranged, but not used. There was also a plan to rescue him from house arrest in Leopoldville and make sure he fell into the hands of his enemies. His supposed escape and subsequent arrest contain many unanswered questions and bear similarities to this CIA plot. There is also circumstantial evidence of a CIA presence of the time of his removal from prison in Thysville for rendition to Katanga. Hours after arrival in Elisabethville, Lumumba and his two colleagues were dead.

Okumu’s opinion is perceptive. There seem to have been a multitude of CIA plans, some of them contradictory and conflicting; at times involving very shady and shadowy characters. There are vague references to biological warfare aimed at Leopoldville’s water supply. And off the coast the United States Navy was involved in surveillance and training. Given Williams’s earlier brilliant forensic research on the death of UN secretary-general Dag Hammarskjöld on 17-18 September 1961, it is no surprise that this incident is revisited.

It is highly likely that Hammarskjöld’s aircraft was shot down by a Fouga fighter plane belonging to the Katanga air force (the re-convened UN inquest is yet to report). This book shows that the CIA arranged delivery of three Fougas, which operated from Kamina airbase. The CIA knew of all Hammarskjöld’s plans and movements as they were reading his communications in real time. An American listening post in Cyprus clearly understood the significance of intercepted traffic from Ndola.

With another author this book might be somewhat dry, but Susan Williams has an admirable knack of spicing her narrative with fascinating descriptions of events plus insights into key personalities. The latter is entirely appropriate since individual attitudes often shape both policy and practice. For instance, there is a carefully constructed description of Bill Burden, the diplomat who influenced American policy towards Congo and Lumumba. Burden was a racist with a pessimistic view of the future of a liberated Africa and a correspondingly low opinion of black Africans (Americans were not unknown for making racist comments about Africans having recently descended from trees). He was also an unapologetic supporter of assassination as a foreign policy tool. As ambassador in Brussels, Burden formed a powerful troika with Clare Timberlake and Larry Devlin, the ambassador and the CIA head of station in Leopoldville from July 1960.

Williams also touches on the Angolan liberation movements whose histories are closely interwoven with that of the Congo. Angola is perhaps the worst example of CIA interference as the wedge it drove between movements contributed to a civil war that lasted a quarter of a century. Holden Roberto was another CIA asset whom Lumumba misguidedly trusted. Cynically, in the name of democracy the CIA and other US agencies subverted African democracy and helped overthrow legitimately elected governments in pursuit of the aims of a new imperialism which was heavily influenced by big businessmen. One of those who clearly saw through this façade in the case of the Congo was the Indian diplomat and UN special representative, Rajeshwal Dayal. The destabilisation of Ghana and 1966 coup by the army and police that deposed Nkrumah bear the Agency’s imprint as it had plotted for years with various opposition figures.

Williams makes frequent reference to the Church Committee (the United States Senate Committee into Governmental Operations and Intelligence Activities) which sat in the mid-1970s and uncovered a great deal of detail about CIA exploits. But some transcriptions are missing and source material heavily redacted. In a bizarre and Kafkaesque twist, applications for documents elicited a response that their existence or non-existence was in itself classified. In the case of CIA asset Howard Imbrey this is largely self-defeating as he made a public record of his activities in the Congo before he died. Williams also depends heavily on memoirs, but concludes that they often contain not only unreliable accounts but deliberate lies. This is not surprising in the work of those who made careers out of deception and fabrication. The juggling of butchered archival material and misleading autobiography would have made this research a serious challenge.

Williams also intriguingly draws attention to the fact that a number of African political leaders and influential theorists (George Padmore and Frantz Fanon, for instance) died relatively young and in circumstances that raise certain suspicion. The role of biological warfare and the toxins of Sidney Gottlieb are obscured by the destruction of the records of the MKUltra drug and mind-control programme. There is also the strange fact that in the 1950s three men who may have been seen as a danger to the CIA fell to their deaths from high-rise New York buildings; one of them being Nat Nakasa, the South African journalist. This could simply be suicidal coincidence; but for the fact that the circumstances mirror exactly a method named in a CIA assassination manual.

It is probable that we shall never know the full extent of CIA activity and American intervention in Africa, whether of the soft power or dirty trick variety, because much of it was deliberately undocumented using back-channel communication. The wider implications can only be imagined, but Williams makes a strong case that ongoing, and even present, negative perceptions of Africa were encouraged by CIA activity that traduced the names of certain leaders and created instability. The CIA helped to create an image of Africa that suited American aims, but has done untold damage to the continent.