Anton Harber, So, for the Record: Behind the Headlines in an Era of State Capture (Johannesburg: Jonathan Ball, 2020) 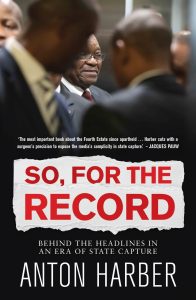 WHEN the nation’s largest and most influential paper publishes a series of stories over several years that amount to fake news, refuses to take alternative evidence seriously, and loudly abuses those who question its conduct, there is a crisis. This was the record of the Sunday Times (ST); highly damaging given South Africa’s fragile democracy. ST journalists exhibited chronic levels of arrogance and lack of professionalism and wittingly and unwittingly assisted the agenda of the Zupta faction’s state capture project. This is very much a saga of our times: the pursuit of profit; the pressure of new means of news delivery particularly through social media; and populist journalism that valued screaming headlines and short, simplified stories.

Institutional targets were SARS and the Hawks; the stories those of an illicit investigative unit, illegal rendition to Zimbabwe and a Cato Manor death squad. Each was personalised: Johann van Loggerenberg, Anwa Dramat and Johan Booysen with a supporting cast – Shadrack Sibiya, Ivan Pillay and others. It comes as no surprise to find that each of these supposed miscreants was an obstacle to the Zupta agenda. ST journalism reached the depths with smears: Van Loggerenberg was labelled an apartheid-era spy and Booysen the head of a ruthless hit squad; and the SARS investigative unit was said to run a brothel. All were baseless claims. The conveniently slippery, non-libellous word ‘rogue’ was freely used.

Those targeted all lost their jobs. Booysen was arrested on trumped-up charges and full vindication took him seven years. This was his reward for pursuit of corruption around FIFA World Cup tenders. Van Loggerenberg, another impressively single-minded individual, later conducted his own truth commission with three reporters from the ST. Losing its grip by 2018, the ST unwisely took on Paul O’Sullivan.

Anton Harber calls this ‘fast’, ‘rushed’ and ‘shortcut’ journalism, but the words delinquent and promiscuous might be more accurate in view of incompetent use of evidence and statistics. The photographs purporting to substantiate the Cato Manor story were a plant; standard police pictures. Alleged transgressors were given minimal opportunity to respond, or largely ignored; and the term ‘alleged’ was denied them. Glaring questions were not interrogated.

The SARS rogue investigative unit story was relentlessly pursued even though Van Loggerenberg, Pillay and Adrian Lackay had been very open with the media about the illegal tobacco trade that had cornered over 40% of the market. The nexus between business, gangsters and politics was highly suggestive. But the ST chose to go after SARS instead and in the opinion of the Nugent commission was complicit in Tom Moyane’s ‘reckless mismanagement’. Another disturbing section of this book covers investigations into SARS by Sikhakane, Kroon and KPMG that showed poor judgement and incompetence that fed further into the fake news agenda.

The ST’s unreliable stories not only betrayed the standards of journalism, but helped hollow out key state institutions. The careers of many worthy people were disrupted or destroyed in the process and their jobs went to Zuma cronies with consequences evident today. Some of those responsible continue refuse to accept culpability and, to add insult to injury, play the race card. Some of what the ST printed was simple fiction delivered in a ‘reckless and crude’ manner that was ‘deeply unjournalistic’.

Much of this can be attributed to institutional culture and managerial style. The ST had a self-declared monopoly on truth, boiled it down to easily digested 800-word stories, and then abused, often in puerile fashion, any other publication that questioned them. The paper behaved as if it had judicial powers. Its investigative unit was elitist, untouchable and macho, secretive about sources and beyond control, populated by journalistic hustlers; a paper within a paper behind a keypad-controlled door and absolved from the accountability of the weekly diary and daily review meeting.

The paper’s practice of using multiple bylines made it difficult to trace who had been responsible for the components of a story; and what started off with shaky evidence, sometimes simple hearsay, was embellished as it progressed along the editorial chain. The process of sustaining a fake story over many months and digging an even bigger hole suggests reckless arrogance and detachment from reality. Editorial comment about truth added hypocrisy to the charge sheet. Bizarrely, there had been a newsroom review in 2008, with Harber serving on the panel, but its findings were largely ignored.

Harber explains the significance of information peddlers and their dossiers, which multiplied under the Zuma administration: there is the widespread belief that genuine information was spun and embroidered to achieve political ends, but one source believes much of it was newly manufactured. Harber fingers the State Security Agency and South African Police Service Crime Intelligence. He believes that some journalists were on the payroll of one, other, or both; highly suggestive of the days of apartheid. And he explains censorship by noise: confusion is created by a flurry of disinformation that confuses the public and breeds general scepticism.

This is a shocking tale of the conscious undermining of key democratic institutions. Harber provides a fascinating account, but lets the guilty off far too lightly. Errors, he argues, occur under deadline pressure in journalism. Indeed, they do. He provides a couple of examples from his tenure as editor of the Weekly Mail: the bugging of a Hillbrow hotel and unquestioning acceptance of a doctored manifest. But these were minor transgressions (and committed in good faith) compared with the industrial scale of the ST’s misdemeanours.

They are thrown into further focus by the Gupta leaks episode. This invaluable and damning collection of emails, which opened up the can of worms of state capture, came by sheer accident into the hands of computer technicians. After many fits and starts the data ended up with the Daily Maverick who not only rejected the chance to make a premature sensation; but realised that co-operation is the hallmark of responsible journalism today and enlisted the investigative unit amaBhungane ahead of a long process of planned sifting and analysis. However, the ST also obtained a copy (the imperious Magda Wierzycka is fingered as the culprit) and picked out the juicier items. Populist journalism was alive and well. Its antithesis is amaBhungane, the dung beetles of South African journalism. financed by philanthropists and painstaking in their work.

Harber emphasises that the immediacy of the press is an asset to democracy; a watchdog and a brake on corruption and incompetence. All journalism is selective, but there are straightforward rules that prevent unwarranted harm. A story should look at various angles and alternative narratives cannot be ignored. By contrast the behaviour of the ST was akin to that of a kangaroo court. Even more alarming is the reminder that it was matched by other propagandists in the media world: the Guptas’ New Age Media, Iqbal Survé’s Sekunjalo Independent group and the corrupted South African Broadcasting Corporation.

There was a reckoning for the ST with a series of retractions and apologies at the insistence of the press ombudsman from 2015 to 2016 and a number of awards were withdrawn, although not all were returned. The moral of the story is that key institutions are alarmingly fragile and that too often totally unsuitable people are appointed to them for spurious reasons and to serve inappropriate agendas.

This saga is reminiscent of the sins of the News of the World in Britain. Perhaps for its complicity in state capture the ST should have suffered a similar fate.