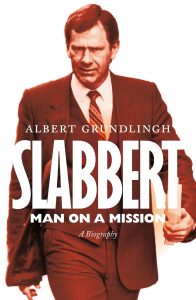 AN INDEPENDENT thinker and individualist, a believer in the persuasive power of rational thought and logical argument, and possessed of missionary tendencies: Frederik van Zyl Slabbert was an academic, leader of the opposition in parliament, political facilitator and businessman. He was one of the most talented South African politicians of the 1970s and 1980s, yet by the time he died at the age of 70 in 2010 he had been in perceived obscurity for two decades.

Slabbert appeared never to settle at anything for very long and given his personal strengths he is sometimes portrayed as an enigma. But, as Albert Grundlingh ably shows, Slabbert’s life is readily explained. His birth, as he himself recognised, was accidental. His father was almost entirely absent from his childhood, his mother an alcoholic. Slabbert and his twin sister were members of a dysfunctional family and used to discontinuity. In adulthood change was no stranger and, indeed, all too possible given his multiple abilities. The other factor Grundlingh emphasises is that Slabbert trained at University of Stellenbosch to become a minister of religion, but lost his calling and switched to sociology (an inevitable parallel with Hendrik Verwoerd is drawn here). However, he retained a missionary approach to life with sympathy for outsiders and underdogs.

After a stellar school record that included a great deal of rugby, then his Stellenbosch degree, his first career was in academia and he could have quickly reached giddy heights in an era in which higher education was more flexible in its appointments. He moved from Rhodes, back to his alma mater and Cape Town, and then to Wits where he was full professor at the age of only 33. But in the watershed 1974 general election he won Rondebosch for the Progressive Party as part of what was seen as a political renaissance. Five years later he became leader of the parliamentary opposition, the youngest ever. At a time of gathering change, as a liberal Afrikaner with a nuanced understanding of his identity, a formidable intellect and the ability to draw crowds, he was a godsend to anti-apartheid white politics; and even a potential threat to the National Party (NP). Elderly voters saw him as a successor to Jan Smuts, the ‘poster boy for modern electioneering in South Africa.’

He had a natural affinity with leadership without losing a down-to-earth attitude, and charisma and oratory undoubtedly introduced a Slabbert factor into white politics. The party he wished for was tough about principle, flexible in strategy. As a parliamentarian his interventions frequently mirrored the struggles of black people against apartheid law. Under his leadership of the opposition, the NP lost its first by-election since 1948, then in the 1981 general election the Progressive Federal Party (PFP) won an impressive 26 seats, taking six from the NP and defeating a Cabinet minister. It was at the height of its success.

However, this was a false dawn, scuppered by the wily P.W. Botha and his referendum over a tricameral system of government that would draw in Indian and coloured citizens while leaving Africans out of national politics. This was described as ‘co-optive domination’, a recipe for disaster. Slabbert said so bluntly; and so it turned out. But the PFP by advocating a ‘No’ vote was placed in an invidious position, in the same apparent camp as extreme right-wingers, and suffered a heavy defeat. The business community was particularly notable for putting short-term self-interest ahead of the long view, while the realism of the PFP was seen as obstruction of change. It was the beginning of the end of Slabbert’s parliamentary career.

Slabbert was a traditional liberal influenced by the thinking of Karl Popper, suspicious of grand theory about social organisation. His forte was the development of ideas about constitutional models for a democratic nation. These should be based on power sharing and evolve out of negotiation. He was essentially an intellectual and an academic, not ideally suited to the inevitable trivial lubrication of political life, although Grundlingh emphasises that he campaigned vigorously and worked very hard for the PFP.

After the 1982 referendum and the launch of the United Democratic Front, he found himself in a quandary over sanctions, relations with Inkatha and conscription. Grundlingh goes into considerable detail about the military issue and is particularly critical of the End Conscription Campaign without fully explaining the context: the growing rule of the security forces assisted by vigilantes. Slabbert was also troubled by the blind intransigence, lies and misinformation peddled by the NP even after private meetings with Botha and Chris Heunis. Eventually, in early 1986, following the failure of the ill-starred Convention Alliance, he came to the conclusion that parliamentary politics was a cul-de-sac and resigned to the fury of many, including Helen Suzman. Accused of not having the balls for politics he apparently responded that South Africa had plenty of politicians with balls, but they lacked brains. It was an existential moment, not just for Slabbert but ultimately for white liberals who would increasingly find political oxygen elusive. The PFP was frozen out of politics.

Alex Boraine resigned with Slabbert and they set up the Institute for a Democratic Alternative for South Africa (IDASA). It was a fertile time for non-governmental organisations and IDASA made its mark by introducing various groups to the ANC. Most famous was the intrepid Dakar meeting of 1987 where prominent Afrikaners met the ANC, led on this occasion by Thabo Mbeki. There were other meetings and funding became easier as IDASA settled into the role of think tank and educational agency for non-racial democracy. Some of the funding came from the Soros Foundation, for whom Slabbert later worked. A notable project was the Goree Institute, possibly the high point of Slabbert’s career.

But Slabbert found himself increasingly painted into a corner. His facilitation work was crucial, but he now had no party base and in any case political space was increasingly to be occupied by the NP and ANC with a few spoilers like Inkatha. Slabbert and Mbeki appeared to be close colleagues for a while, but it later became apparent that Slabbert had placed too much faith in the ANC, possibly reacting to mystique created by NP demonisation, and been naïve about his ongoing relationship. Failure to include him in the negotiations of the early 1990s is the greatest contradiction of his life. But there was no future for his liberal outlook amid the democratic centralism and patronage networks of the ANC.

Slabbert remained critically engaged during the democratic era. He was justifiably sceptical about the Truth Commission seeing it as a largely political stage and asking how truth, and thus reconciliation, could emerge outside a strictly legal context. Various facilitation roles included the electoral task team, which he regarded as a frustrating experience. It recommended major reform that was never implemented, but it has recently been endorsed by the Constitutional Court – part of Slabbert’s ongoing legacy. Otherwise he engaged in philanthropy and business and eventually became chancellor of the University of Stellenbosch, although his health declined steadily and he died relatively young and mourned by many.

Some regard his political career as tragic. But it is striking how many of the features of the PFP Constitutional Commission of 1978, the first coherent attempt at reform since 1910, appear in the post-apartheid Constitution. When Slabbert was working away at a constitutional future including individual rights and an independent judiciary, the ANC had little more to offer than Freedom Charter rhetoric. On major political issues he was generally correct and way ahead of his contemporaries, arguing for example that tinkering with apartheid was futile. He displayed two of the true characteristics of the intellectual: an ability to set telling questions; and foresight.

While Slabbert’s career was non-linear and appeared to move in five-year episodes, it was no failure – although he did suggest this himself in 1999 – but it does raise the question whether there is a place in political leadership for a quick-thinking, serious intellect. Is this what modern materialist societies want? Slabbert lived at a time of momentous change that did not favour him, but creditably he used his talents and energy to reinvent himself, several times. The continuity in this lies in his missionary inclinations, idealism and desire to build bridges as the sub-title of this book justifiably highlights.