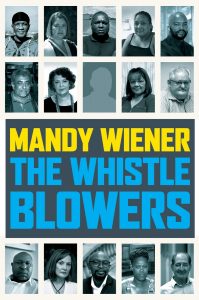 MANDY Wiener’s book needs no sub-title; and it is a scathing indictment of the state of South Africa. It begins with a lament for whistleblowers amid doubt about their designation and definition. Journalists get plaudits and even awards on the back of whistleblowers’ courage. In turn, the latter experience unemployment, ostracism and depression. Some are murdered in a modern form of martyrdom. Why do they do it? There is no manual, there are no guidelines; but Wiener hopes that one day they will be recognised as heroes, even though at present their evidence is all too often swept under the carpet. In this book she deals with fifteen cases and focuses in particular on their human dimensions. Her interviews are reported at great length, which might, unfortunately, lead to reader irritation.

She takes a catholic view of whistleblowing and includes those who confess their own sins. After all, there is redemption and the fight against corruption requires as much evidence as it can get. There is no typology for whistleblowers, although some believe all possess a degree of moral courage. This is particularly relevant since whistleblowing is a way of challenging power; an assertion of belief in legality and morality. But given the fact that the ANC is now a vast criminal enterprise those blowing whistles are prone to charges of counter-revolutionary behaviour and taunts of impimpi.

Wiener’s first example is Moss Phakoe, shot in his driveway while exposing corruption in Rustenburg. The aftermath was all too predictable: shoddy police work and disappearing dockets. A witness finally came forward and two prominent people were convicted of murder, but the case was overturned on appeal. One of those originally convicted is now in parliament while Phakoe’s ally lives in a rural area for self-protection. This is a case in which the law signally failed those who had behaved with moral courage.

It is Mpumalanga, which Wiener calls the Wild East, that is the centre of whistleblower murder. Jimmy Mohlala and Sammy Mpatlanyane were gunned down for pursuing corruption allegations around construction of Mbombela stadium for the 2010 FIFA World Cup. The killers have never been caught, thanks to a farcical chain of police ineptitude and malpractice. There are allegations that the chain of responsibility extends to the highest levels of the ANC with other deaths connected to corruption around the stadium.

More killings followed exposure of the Estina Dairy [sic] Farm fraud at Vrede. The primary whistleblower, Doctor Radebe a former DA councillor, is still alive, but three others are not. The murder of Moses Tshake, an upright civil servant with the Free State Department of Agriculture, is enough to make one’s stomach turn. In South Africa you can die a violent death for doing your job diligently. There is strong evidence that hired thugs from across the Lesotho border were responsible for Tshake’s kidnapping, torture (he was towed behind his car) and eventual death. This was the reward for opposing a Gupta/ANC scam; such is the price of patriotism.

Imraahn Ismail Mukaddam was the whistleblower who exposed the infamous Cape Town bread cartel for prosecution by the Competition Commission. Dissatisfied with the outcome, he pursued the issue of class action and won in the Constitutional Court. Subsequently he became a community activist, but the outcome he had to face was failure of his businesses. Patricia de Lille blew the initial whistle on the arms deal based on a dossier supplied by the still-mysterious Bheki Jacobs. But even as a parliamentarian she was subject to intimidation and threats. Susan Delique who worked briefly for Alain Thétard at Thint led a paranoid life after she came into possession of a handwritten note linking Schabir Shaik to corruption and subsequently gave evidence at his trial.

Some whistleblowers retain anonymity. An employee of the Austrian company contracted to the Gauteng e-toll project fed information to OUTA’s Wayne Duvenage and John Clarke that enabled them to confirm their suspicions of SANRAL’s malfeasance and conduct a highly effective campaign against tolls. The informant used the pseudonym Captain Kirk (Starwars) and maintained a sophisticated communication system that involved burner phones not generally available in South Africa. Similar high security surrounded Stan and John the anonymous sources of the Gupta leaks hard drive that eventually found its way to the Daily Maverick via human rights lawyer Brian Currin. This story reads like a Le Carré novel with flights in and out of the country, involvement of Zondo Commission evidence leaders, and intrusion by the FBI (and possibly CIA). South Africa owes an enormous debt to Stan and John, but the result for them and their families was exile. In one case this seems to have been most unhappy.

By way of contrast, exposure of massive corruption at Bosasa has seen high-profile performances by Angelo Agrizzi and Andries van Tonder before the Zondo Commission. Again there is the possible argument that neither was a true whistleblower, benefiting personally from industrial-scale graft long after they should have come clean. But ultimately the detail they revealed has filled in another major piece of the South African puzzle that constitutes state capture. The reactions of the Watson family recorded here and elsewhere have been despicable.

The cast of the Eskom expose is well known. Suzanne Daniels, the company secretary who blew the whistle on the Optimum coal mine deal, has been criticised by some as complicit and not a genuine informant. This raises questions of timing and motive that cannot be standardised given varying situations and different personalities. As Wiener argues, it’s the outcome that counts. Bianca Goodson, CEO at Trillian, also took time to expose capture by the Guptas.

Simphiwe Mayisela became a circumstantial whistleblower at the Public Investment Corporation (PIC). He entered a police station to open a case so that a subpoena could be obtained to identify a pseudonymous informant (James Nogu who remains unidentified). He left persuaded by the police that he was acting illegally and having agreed to inform for them. The rapid outcome was dismissal, even though he was acting in terms of conscience and the law. The Mpati Commission was scathing in its judgment of the PIC CEO Dan Matjila, but highly critical of Mayisela too.

The hasty and prejudicial liquidation of pension funds by the Financial Services Board (FSB) threw up two whistleblowers on different sides of the story. After a distinguished career in private practice, Rosemary Hunter joined the FSB where she experienced obstruction and harassment in trying to expose injustice. Significantly, she had the accumulated experience and support of one of the country’s most eminent struggle families. With a very different background Michelle Mitchley fought a similar battle from the private sector’s Liberty. The FSB, backed by the courts maintained its arrogant stance; but Liberty did admit errors and an apparent desire to rectify them.

Wiener’s last case as yet has no outcome. It is that of Thabiso Zulu who has led a chequered career in the ANC, but is famous for exposing corruption in the uMzimkhulu area of southern KwaZulu-Natal. As a result he is permanently on the run in the province that holds the record for political killing, having survived a murder attempt at Copesville in Pietermaritzburg. He regards himself not primarily as a whistleblower, but as an anti-corruption activist. The waters are muddy indeed in KZN where it is easy enough to accuse whistleblowers of simply belonging to the wrong faction.

Few of these accounts have a truly happy outcome: as Mayisela puts it, the price of a clear conscience is ‘exceptionally high.’ The advice of most whistleblowers to potential emulators is negative as their own experiences have often been very painful. It is as if illegality and corruption in South Africa are so pervasive and the public has become so inured that those who expose them are regarded as misfits. The law (Protected Disclosures Act) is largely inadequate and some of the more heartening outcomes have been a result of foreign funding from France. But most of the whistleblowers described in this important book suffered serious damage; some terminal. Many of them became unemployable and one was told she had too much integrity. That is an unbelievable and telling verdict in contemporary South Africa.

Wiener had the difficult task of writing an honest book about whistleblowing without deterring future whistleblowers. Her main conclusion is that South Africa needs to provide institutional moral and practical support for whistleblowers like that available in the Netherlands. But that in itself would be insufficient. The guilty escape largely scot-free and those who expose them suffer in multiple ways. This is a matter of ethics, and South Africa’s is not the only society that falls woefully short. The corrupt need to face dire consequences; those who expose them should be lauded, protected and reasonably rewarded. The key to this lies within the value systems of government and business. The nation at present is defined by a serious deficit of ethical behaviour everywhere; so it is hard to see how the future of whistleblowers can be secured.