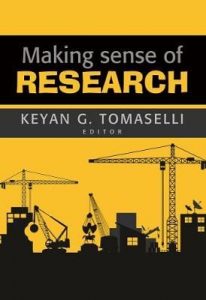 THE ESSENTIAL purpose of universities is easy enough to define: training and practice in the acquisition, refinement and dissemination of new knowledge – information to which method has been applied. All too often universities are used for other purposes, but research is their ultimate goal, setting them apart from other types of higher education. In this volume, Keyan Tomaselli has brought together the contributions of two dozen academics in a comprehensive guide to research that should appeal to writers in general as well as prospective postgraduate students. Predictably, the chapters by Tomaselli, widely known as the UKZN Griot, are irreverent, insightful, and often highly entertaining.

This anthology is prefaced by the doyen of South African research, Johann Mouton. He points out that research is a quest for truth, a process of making sense of the world that is intrinsic to humanity and common across many occupations. Tomaselli and Ruth Teer-Tomaselli add that research is an essentially messy process, but that it should be enjoyable. It is, above all, education for a life of problem solving and handling the unexpected in the tradition of Paolo Freire: as Tomaselli puts it in his inimitable fashion, ‘Look beneath the [smoothly gliding] duck.’ This book is intended as encouragement to researchers and writers by way of the backstory and its pitfalls and frustrations.

The university has medieval European origins. Its modern descendant should function around the primacy of intellectual merit within a context of freedom and autonomy. The idea of ‘reading’ for a degree underlies reasoning from first principles to solve problems and issues, but the contemporary university is increasingly instrumental, downplaying lateral thinking, imagination and initiative.

All the usual research suspects appear here: semiotics; paradigm shifts; action and participatory research; and qualitative data, reception (audience research) and critical discourse analysis, for instance. One of the book’s many attractions is its emphasis on old-fashioned home truths: quantitative research involves value judgements in spite of an illusory dichotomy; research is dependent on the value of the original question and is invalidated by presumption dressed up in jargon.

The personal roots and significance of much research are acknowledged in oral history, investigation of collective memory and autoethnography. This leads to an interesting discussion about use of the first person in academic writing and the nature of authorial authority. The obvious but important point is made about clear prose and good presentation. This gives Tomaselli the opportunity to take aim at the writing of gibberish that underlies much of what is regarded as post-modernism. This underpins an incestuous loop of impenetrable jargon intelligible only to fellow practitioners all too common in academia.

Perhaps more could have been said about the commodification of publication in which a public good once administered by professional societies has been expropriated by multinational outfits answerable to the market. Tomaselli points out the downside of the SAPSE system and peer review and recalls the days when knowledge was circulated, and vigorous debate fuelled, by desktop publishing (remember Work in Progress and the South African Labour Bulletin among others?) Peter Higgs of the eponymous boson has pointed out that today he would not survive academia; a Nobel prize winner deemed unproductive by current assessment methods. And this book contains an enlightening section on the scams known as predatory publishing that trash the integrity of the system. It is a truly post-modern phenomenon in which everything is ripe for subversion and devaluation.

There is a great deal here about the political economy of contemporary universities, which are assumed to function like supermarkets where consumers (students) pay, pick and mix, then complain if they do not get ‘value for money’. At the same time universities have become victims of managerialism and over-regulation. To researchers the university may appear to exist simply for the gratification of managers and their bureaucracies, a state Tomaselli labels ‘academentia’.

Ethics clearance for a research topic can be such an impediment that the academic work is easy compared to meeting administrative requirements. In a real sense universities, in determining who may be interviewed, are being alienated from the world around them. Tomaselli and Lauren Dyll write that ‘the academy sometimes dwells in the realm of farce’ with no better example than the clearance process. They suggest a chain of events that could result in disciplinary proceedings for what is termed ‘unauthorised dialogue’. To revisit Jonathan Jansen’s famous question, do universities exist any longer? They seem to have ethical problems of their very own making.

Two chapters in particular catch the eye. First is Pier Paolo Frassinelli’s explanation of decolonisation, which rises above the usual rhetoric to state that there are different ways of seeing the world and that equality should be extended to other philosophical approaches. Second is David Coplan’s robust approach to the much contested discipline of ethnography. In his contribution on the archive, Donal McCracken asks whether the past can really exist in a virtual world and draws attention to the feel of an age through its newspapers and other printed records.

This is a reference source for the humanities – cheekily described as the disciplines that fix problems created by science and technology – cultural studies in particular.  The final quarter of the book is a guidebook to the production of a research thesis. There are short glossaries of theory and Freirean critical pedagogy and a very inadequate index that is sparse and unstructured; an apparently random alphabetic sequence of words. This is probably a product of the misguided advice that computer programs can produce indexes. They can’t; they create lists. This one contains gems such as ‘critical’, ‘doing the most good’ and ‘honorary’. Other entries have no page numbers.

Inevitably there is a great deal about technology and its impact, positive and adverse, on academic life. Of the negative it is necessary to look no further than the contrast between the comprehensive literature search and a googled enquiry that extends no further than a first screen page. A smartphone is no smarter than the capability and attitude of its owner.

Salvation, and sanity, lie in such truths.