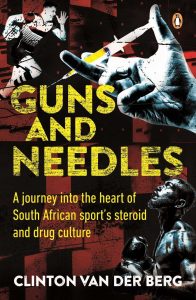 SOUTH Africa has a major problem with drugs in sport: the proportion of positive tests (officially known as adverse analytical findings) is five to ten times the international norm. And a significant fraction of those is found among schoolboy rugby players taking extreme risks in pursuit of an elusive rugby career, often with the collusion of parents. These are two of the shocking findings exposed by sports writer Clinton van der Berg in this oddly titled book: guns put in a fleeting appearance only in the final few pages.

Rugby looms large in this account, although drugs play a significant part in athletics, cycling and boxing as well. Recreational drugs are also banned and a number of cricketers and footballers have fallen foul of the anti-doping authorities. But steroids are the main issue; popular because they work, but both illegal and a hazard to health. Usage is something to be weighed up extremely carefully but much is cavalier and based on short-term thinking. Steroid popularity has increased as rugby, which used to be about skill, has become obsessed instead (with a few notable exceptions) with size and bulk. In South Africa it is now blatantly a power game of increasingly toxic masculinity; and complicity with doping has blossomed.

The market is littered with dodgy products including some, bizarrely, that are home brewed. Gyms seem to be hives of illicit traffic. Some steroid users employ stacking, or ingesting a variety of products, sometimes together with better-known recreational drugs. Van der Berg suggests, plausibly, that the pandemic lockdown has made the situation worse because people have become even more disrespectful of rules and regulations. Where professional sport is concerned, he advocates a ‘healthy dose of scepticism’ as honour and fairness are in serious decline in what is basically now a business environment. In this context the anti-doping agencies, local and international, play a ‘cat and mouse’ game in which the transgressors are always a step ahead. There is a sense that sporting contests are all too often a matter of competing doctors and pharmacists.

Van der Berg is an advocate of strict liability in which individual athletes are solely responsible for what is found in their bodies; and points out that this is one of few areas in law in which accused are guilty until they can prove their innocence. In trying to do so, many have produced fatuous explanations that add insult to injury. One cyclist explained that his syringes were used to inject his machine’s tyres. Blame is placed at the door of across-the-counter medicine and sports supplements; or glasses contaminated by other people’s medication. The number of genuine errors and testing irregularities is low and guilt is the norm. Most accept this, but there is the case of rugby player Mahlatse (Chiliboy) Ralepelle who blames his fate on racism.

The intriguing key to this saga is Liza de Villiers, a talented athlete who, in the mid-1990s at the age of 14, was banned for four years for doping. Many years later, Van der Berg managed to track her down to hear her story, although the ultimate guilty party, either her coach or her father, remains a mystery. What she suffered could nowadays be prosecuted as child abuse. After rugby, athletics remains a fulcrum of doping and its recent history is a litany of four-year bans. In 2006, Athletics South Africa recruited Ekkart Arbeit who had been deeply involved in East Germany’s official doping programme during the Cold War. In 1994 Alberto Salazar had won the Comrades Marathon from nowhere, although it took 25 years before he was finally banned. Fortunately, doping in South Africa, although prolific is still random, and there is no suggestion of a state-sponsored programme that has seen 1 000 Russian athletes from thirty sports banned.

This book is written in the style of a newspaper sports column. This falls short over the longer form of writing and there is considerable repetition and a sense that evidence is not well organised. Predictably, there is a great deal of direct transcription of interviews, which produces tedious and unnecessary passages. The author concludes on an upbeat note with some traditional words about the ultimate value and purity of sport. Given the scenario he has described, this is boldly optimistic but indeed laudable.