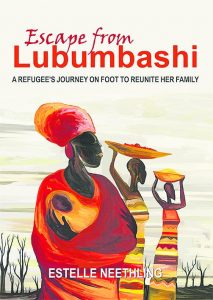 PROLONGED conflict in the DRC produced Africa’s Great War. Casualties are hard to pin down, or comprehend: over five million dead and six million displaced are frequently quoted. But even before the major conflagration, political repression by the massively corrupt Joseph Mobutu and his followers prompted many to leave the country in fear as refugees. One of them, Adolphine Misekabu, fled Shaba province in 1996 at the age of 22 with her child and young brother and was eventually reunited with her husband in South Africa nearly two years later. Her story has been carefully documented by Estelle Neethling, who once worked as a tracing co-ordinator for the International Committee of the Red Cross.

Adolphine’s father, Nkudimba (man of peace), was an admirer of the murdered Congolese leader Patrice Lumumba and a supporter of Etienne Tshisekedi. A Catholic and orphan from Mbuji-Mayi in Kasai province, Nkudimba trained as a doctor but was also a well-known artist. The ‘vicious discord’ of Mobutu’s Zaire where the typical Big Man had hijacked the State prompted Nkudimba to move part of his family to Zambia. Adolphine went to school there and at an early age experienced xenophobia and police harassment.

In 1991 Tshisekedi became Zaire’s prime minister and persecution of Kasaians in Shaba (Katanga) province by Mobutu’s allies intensified. The general instability of eastern Zaire was exacerbated by the Rwandan genocide of April 1994 and its aftermath. Nkudimba was arrested and, although eventually released, in October 1996 he, most of Adolphine’s family and all her in-laws vanished never to be seen again. Then in December her husband Sepano Kabongo had to flee. Adolphine, with her young dependents, started refugee life at a local police station.

Soon they journeyed on foot to Zambia, eventually reaching Lusaka and hoping to come across Sepano. They had only the clothes they escaped in and Adolphine recalled her mother’s experience as a refugee at independence in 1960. Much of the life of a refugee on the move is governed by rumour and having heard about a displaced persons camp in Malawi they set off in the hope of tracing relatives, but drew a blank at Dzaleka near Lilongwe. This seems to have been the nadir of Alphonsine’s experience and she felt suicidal, but was rescued by a good Samaritan named Melody and lived on her farm for ten months. This episode had an extraordinary outcome. Melody’s son was able to tell Adolphine that her husband was working alongside him in Port Elizabeth\. Six months later the money arrived for the family to join him in Cape Town.

Sepano had arrived in South Africa just as the regulations for refugees were changing. Adolphine endured numerous ‘harrowing visits’ to Home Affairs at Customs House in Cape Town, but in 2000 the Kabongo family was awarded s.24 permits recognising them officially as refugees (with permanent residence taking another nine years). In the meantime another threat entered their lives: township crime in Gugulethu. Bonne Esperance shelter for women and children run by the Catholic Welfare Department at Philippi meant further separation, but it provided safety and a growing role for Adolphine. She worked with the children there and eventually joined the staff.

A move to Mitchells Plain freed the family from neither crime nor discrimination, the result of gangs and xenophobia. Hurtful words about ababantu were uttered on public transport and by staff and other patients at medical facilities. The attacks directed against amakwerekwere that started in May 2008 were particularly stressful and the family split again and moved around. The government, with the imminence of the FIFA World Cup, tried to explain away the violence as purely criminal. The truth is that this shameful xenophobic episode was organised by local leaders in their political and economic interests by feeding off anti-foreigner sentiment.

One hundred thousand people, possibly more, were displaced; and Neethling makes the strange claim that ‘It was the first time in South Africa’s history that people, mainly refugees, had been displaced within this country’ (p. 78). There are in fact other examples, most notably the forced removals engineered by the apartheid government. For Adolphine’s family this was a time of great anguish in contrast to the feverish optimism being whipped up among South Africans about football. This continued during the tournament itself with predictable propaganda about the ability of sport to bring people together. Formerly supportive neighbours no longer wanted to associate with the Kabongos and this mistrust revived memories of Zaire. Sepano returned there (now the DRC) in 2013 for a two-month visit during which he was shocked at the level of menace and insecurity. One of the strengths of this book is that it remains engaged with events unfolding in Zaire/DRC such as the fall of Mobutu in 1997.

This is a story of displacement, fortitude and remarkable survival instincts. In times of desperation Adolphine always tried to look to the future. As she put it, she had not come as far as South Africa to give up. Confronted by hostility and prejudice she was remarkably challenging and outspoken against hostility directed at people who are prepared to work hard and rebuild their lives. The displaced are punished many times over. In her case Sepano’s visit to the DRC and the death of her aged grandmother in destitution were defining moments in accepting that South Africa was now her home. She and her children are now well integrated into their local community. Neethling emphasises that documentation of Adolphine’s experience has been a form of therapy and eventually her husband was drawn in too.

How many other people have been through separation like that of Adolphine and Sepano? How many were rewarded by reunification? We shall never know, but accounts of individual experience are the closest we shall come to understanding. Sadly, Africa continues to produce refugees and on a global scale there are more of them than ever. Fewer will want to end up in South Africa given the country’s fading reputation.