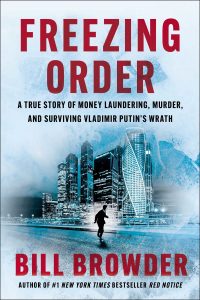 Very wealthy hedge fund operators do not make likely human rights advocates and campaigners, but Bill Browder is very much his own man. So influential and effective has he become in the fight against global corruption and money laundering that he is regularly referred to as Vladimir Putin’s public enemy number one. The Russian state has pursued him relentlessly for two decades.

The background, in a nutshell, is this. Browder was a co-founder and CEO of Hermitage Capital, the largest foreign investor in Russia and the world’s best performing fund in 1997. But he was also involved in shareholder rights activism; in plain terms exposing rampant corruption and malfeasance, for example in Gazprom. This proved both popular and lucrative, but in 2005 he was excluded from Russia.

Two years later the registration documents of Hermitage companies were seized in raids, illegally  re-registered and used for fraudulent purposes including a $230 million tax refund. By this time Hermitage had liquidated its assets and its staff had left Russia, but Sergei Magnitsky its lawyer-auditor remained. He was arrested and held for eleven months before being beaten to death by eight prison guards in November 2009. For Browder this was the final straw and he has campaigned unsparingly, in effect a personal crusade, to make his colleague’s brutal end meaningful.

Browder is American born, but a British citizen since 1999. His grandfather, Earl, was the mid-twentieth century leader of the American Communist Party, twice a presidential candidate and twice imprisoned. His grandson has clearly inherited a strong strain of activism and looks back here to a sense of juvenile outrage when his flute was stolen; and his subsequent interest in police work (he belonged to the Chicago junior police patrol). Many years later he would merge those feelings into a campaign that led to the Magnitsky Act, American legislation of 2012 to enable forfeiture of the laundered proceedings of crime.

The Russian response was to try him in absentia twice for tax evasion and sentence him to eighteen years in prison. On the first occasion the deceased Magnitsky was put on trial, too, and sentenced; a macabre authoritarian touch. The Russians have also pursued Browder through the US courts with demands for information that would compromise his safety; and used Interpol to have him arrested and his travel obstructed. Interpol has fortunately declared these Russian red notices political and thus invalid.

The Kremlin has good reason to fear Browder who has used the resources of Hermitage, and other investigative bodies, to follow an extraordinary money trail. They were assisted by the lack of data protection in Russia and its highly bureaucratic culture. And the fact that every transaction in US dollars in the world passes through a correspondent American bank, even if momentarily and is therefore traceable, assisted enquiries. The work of investigative journalists, for example the Panama Papers revelations, has added to an understanding of what Browder now reckons to be at least $1 trillion of illegal proceeds laundered out of Russia.

Much of it is Putin’s personal loot. Magnitsky Acts are now in force in three dozen countries with the number growing and their underlying premise extended globally, for example to Saudi Arabia. As a client state of Moscow, South Africa has no Magnitsky Act and is unlikely to get one. Although Browder owns a house in South Africa he cannot visit here because of fear of the Russian connection. Indeed, a great deal of the culture of contemporary Russia is resonant of South Africa, in particular state capture and the supreme arrogance with which political power is wielded.

This book echoes much of what has been seen during the invasion of Ukraine: an inversion of reality in which perpetrator becomes victim and vice versa; and truth and reality are upended at will. But as Browder shrewdly points out, ‘If someone does something that appears irrational, it just means you don’t have all the information’ (p. 227). And in the West, there are enough willing enablers to promote and pursue this falsity and extend the imprint of injustice. One was improbably named John Moscow, a New York lawyer who acted for Browder but swapped sides. It took months for this lack of ethics to be rectified. Browder was able to strike a blow against this general scourge by testifying in 2017 before a Senate committee looking into the malfunctioning of the registration of agents of foreign governments.

Browder’s book concerns an enormously serious issue that impacts on democratic societies in multiple ways. But it is also a riveting read that reaches thriller levels. The author knows well how to tell a compelling story in the interest of a noble cause. And that cause underlies democratic values.