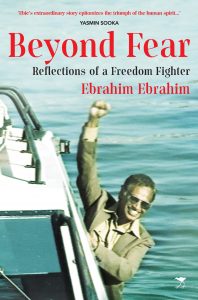 CONVICTED of sabotage in 1963 and of treason in 1988, Ebrahim Ismail Ebrahim was sent to Robben Island twice; at the ages of 26 and 51. The first time he served his full sentence of 15 years; the second time he was released early when his conviction was found to be flawed.

Ebrahim is perhaps the archetypal freedom fighter, characterised by Albie Sachs in his foreword as a person of idealism, conviction and mental strength. There is no doubt about the last, which enabled Ebrahim to resist some of the apartheid state’s most depraved interrogators. His family origins were in Durban’s Magazine Barracks and Greyville; his political upbringing in the Defiance Campaign, at Red Square and around development of the Freedom Charter; and his early working life as a New Age journalist. In 1961 he was part of a South African Communist Party cell that included Phyllis Naidoo and Eleanor Kasrils; and then an MK unit of five self-taught saboteurs who pilfered dynamite and transported it in paper bags on buses. Their efforts are understandably described as ‘haphazard and dangerous’. But the unit caused considerable damage and Ebrahim returned one morning as a journalist to cover his own part in electricity pylon demolition.

But in August 1963 his luck ran out, he was betrayed by the infamous Bruno Mtolo and arrested in Kloof. Being charged in the 1963‒1964 Pietermaritzburg sabotage trial along with Billy Nair was something of a relief because he was again visible: the greatest fear of political detainees was disappearance. He started his fifteen-year sentence sharing transport to Robben Island with Jacob Zuma and Dennis Brutus. The Island he describes as akin to a military punishment camp, a place of shouting and beating; and violation of the state’s own prison regulations.

Isolated from the Rivonia prisoners, his group worked at the stone quarry where there was a revolt against conditions. In spite of their punitive culture, the authorities were wary of lawyers and the reach of the law. Some small victories were won, but Ebrahim took five years to complete his BA because of obstruction of access to books. The operation of an informal university caused resentment among barely literate white warders. But there were self-inflicted problems, too; for example, the arrival of Harry Gwala and South African Congress of Trade Union sectarianism.

The government denied the existence of political prisoners, arguing that they were all criminals. The counter-argument that they should thus have the privileges of convicts was brushed away by Jimmy Kruger on the grounds that they were beyond rehabilitation (here Ebrahim agrees with Kruger). They were successfully cut off from the outside world with no inkling of the Soweto Uprising until a new wave of prisoners reached the Island.

Back in Durban in 1979, Ebrahim was banned. This did not prevent him playing an increasingly prominent role in the ANC’s Swazi corridor (the Bay) that linked Mozambique and South Africa. It was an area of complex politics and ‘layers of betrayal’ in Jacob Dlamini’s observation. This author unfortunately has nothing significant to say about Zuma (to whom he was decades later a political advisor) or the strange death of Thami Zulu (Muziwakhe Ngwenya). Ebrahim was infiltrated back into South Africa heavily disguised, but made the unwise decision to meet Hélène Passtoors, who was under military intelligence surveillance. As a result, he ended up underground in Reservoir Hills while the security branch went on a detention spree.

Back in Swaziland, Ebrahim was given a leading role in Operation Vula, arguably one of the ANC’s most successful exile operations. Although he had an Indian passport and a Swazi residence permit, he was brazenly abducted and delivered to the security branch at Compol in Pretoria. Again, detention (this time under section 29 of the Internal Security Act) was a relative relief as he could have been delivered into the oblivion of Vlakplaas. Instead, he underwent psychological disorientation at John Vorster Square police station before appearing in a treason trial at the obscure venue of Piet Retief. He had never met or worked with his co-accused and the charges relating to landmines were fictitious. Testimony was provided by September, the askari Glory Sedibe. Ebrahim served three of twenty years on Robben Island before his conviction was overturned in February 1991 on the grounds that jurisdiction was null and void because of the abduction. The lie that this was by persons unknown was exposed by the fact that his abductors were in touch with Niël Barnard, head of national intelligence.

Ebrahim died in December last year. There is no doubting his commitment or courage. But he emphasises that he was a dedicated revolutionary without defining exactly what this means: a matter of degree, or something more specific? All we learn is that ‘revolutionaries never retire’. His post-apartheid parliamentary and political career, much of it involving foreign relations, ended by serving a thoroughly corrupt regime engineered by many characters also happy to call themselves revolutionary. And the publishers of his book have done him no posthumous favours by including a photograph with Sergey Lavrov, Russian foreign minister and war criminal.

There are a few other off-key moments. In Natal, at least, the Liberal Party did have a significant black membership (p. 40); there is nothing questionable about Albert Luthuli’s death (p. 48); SACTU was the Congress of Trade Unions (not Council, p. 218); and the slogan ‘no normal sport in an abnormal society’ is generally attributed to Hassan Howa, not Brutus (p. 90).

By the time Ebrahim and South Africa were both free, he was in his mid-50s. His activism denied him a family life of any sort and even his brother Gora was part of an opposing anti-apartheid movement, the fractious Pan Africanist Congress. They worked together in the Patriotic Front of the early 1990s and eventually Ebrahim did find the stable family life, well covered by the photographs, that he desired and indeed deserved. But his book leaves many questions unanswered and serves to emphasise the complexity of South Africa’s history that is obscured by simple tags such as ‘revolutionary’.