Win in Washington, 1965‒1978: Letters and Drawings from Rhodesians Stranded in the United States after UDI

Tony Hooper, Win in Washington, 1965‒1978: Letters and Drawings from Rhodesians Stranded in the United States after UDI (Footprint Press, 2022) 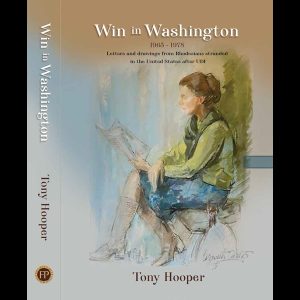 This book is not simply an historical record, but reflects a genre from a different epoch; a time of literacy when people took paper and pen, wrote expressive and informative letters, and posted them in a box – confident they would actually reach their destinations. They were a primary means of communication and for many people constituted an art form. Archivally, like diaries, they may be a useful source for historians. Even where electronic equivalents are preserved, it is doubtful if they will carry the same weight and authenticity.

There is much in this particular collection that is routine family news plus even more about Win Hooper’s artistic involvements – she was a talented painter although this book contains just a few black and white sketches. Her strong personality and sense of ironic humour emerge clearly from her writing.

The reproduced letters were written in fraught and anxious times; but also, it appears, with an eye to posterity. The UDI watershed in Rhodesia in 1965 left an enclave of diplomats in Washington at the Rhodesian Information Office (RIO). This became in the words of the academic Eddie Michel, the quasi-embassy of an illegal regime. Win Hooper described the staff as ‘defrocked’ and the United States as their ‘large jail’. The RIO was registered, but the State Department was not above obstructionism and a degree of arrogance while the Treasury Department froze funds.

Permanent residence was denied, so John Hooper could not risk leaving the country and stayed put for thirteen years; although Win was allowed leave in 1969. The personal challenges were considerable, but stoically borne. In mid-1970 the RIO was bombed together with the Portuguese embassy. This was a very British rebellion and Win regretted declaration of a republic in February 1970. The RIO was closed by Salisbury in June 1977, by which time majority rule in some form or another was inevitable, and the Hoopers were recalled.

The context to these letters lies in events half a century ago, but even at the time they reflected nostalgia for a vanishing world and a determination to preserve a threatened and familiar way of life. Rhodesia is assumed to be a place of racial harmony and partnership, even a model for Britain and the USA. There is indignation that a country still as racist as the latter should be critical of Rhodesia. (In Washington the Hoopers were vetted before signing on for an apartment – in case they were black.) These are the views of a particular group and time that historians have not subsequently treated kindly. And they are somewhat contradictory when it emerges that in 1977 legislation was necessary to relax racial discrimination.

The caste of contemporary characters and attitudes towards them shed significant light. Harold Wilson, who oversaw the modernisation of Britain, was much disliked; the admirable Garfield and Judith Todd were regarded as bothersome; and Peter Niesewand was seen as deserving what he got (solitary confinement in detention). Niesewand, who died tragically young, is today remembered as a highly talented journalist and a significant fighter for press freedom. The white supremacist Ian Smith emerges as a moderate as does Moise Tshombe. But, of course, one person’s ‘terrorist’ is always another’s ‘freedom fighter’. And there are signs of changed opinion: by the mid-1970s Smith is criticised as doing too little too late and making empty, grand and unhelpful statements.

Successive US administrations, although uncomfortable with the presence of the RIO, tolerated its presence and activities as part of a multiple balancing act that embraced both domestic and international concerns. Cautious hostility to Rhodesia enabled the US to remain onside with African countries while continuing to benefit from trade; and pointing out that the rebellion was ultimately a British problem. Trade in chrome was key and the Byrd amendment of 1971 crops up regularly in these letters.

In 1973 the RIO was investigated by the FBI but Win’s indignation aside, John Hooper pointed out that this is routine for all those outfits registered as foreign agents and a requirement of American law. The letters are peppered with the names of politicians and persons of influence who are almost certainly very conservative, pro-Rhodesian and kindly disposed to UDI. The US government was wary of upsetting such people. But the RIO was equally aware of the dangers of appearing too close to extreme right-wingers such as members of the John Birch Society.

These letters contain interesting, and often sharp, observations of American life in the sixties and seventies, albeit at a relatively rarified level. Much of the commentary anticipates subsequent globalisation, or Americanisation, that is taken for granted today. Win comments on the twin power of God and the dollar; on sport and money; and on deplatforming. There are accounts of much travel, the distinctiveness of Christmas in the US and the formalities of the social round, which appear to have become something of a strain by 1974.

This was the era of growing black power and white backlash in America and dramatic events such as the 1970 shooting at Kent State. While the Hoopers were in the US the Vietnam War raged and ended in a withdrawal that has national psychological effects to this day. It was also the time of Watergate. A great deal of political background is understandably missing from what is family correspondence, so reading these letters might usefully be accompanied by a short history of the American politics of the period.

It seemed to the letter writer that global violence was on the increase, but any such personal view from a specific time and place must be treated with caution as historical witness. At one point Win writes, ‘much that happens doesn’t make sense’ (p. 282). That is a common lament, but, of course, everything does make sense ‒ to someone, somewhere.