The ANC’s Last Decade: How the Decline of the Party Will Transform South Africa

Ralph Mathekga, The ANC’s Last Decade: How the Decline of the Party will Transform South Africa (Cape Town: Tafelberg, 2021) 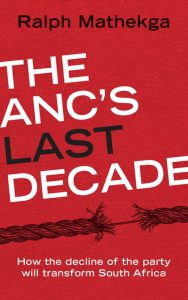 IN his foreword, Stephen Grootes makes the telling observation that in an age of growing poverty and inequality, and severe environmental challenges, populism and identity politics are on the rise. This is indeed a global phenomenon.

But in South Africa we also have the ANC. Ralph Mathekga is clear about its political culture, which echoes the closed years of exile: so-called democratic centralism and focus on the collective that diminishes the role of individual agency. The accompanying rhetoric suggests that this reflects the will of the people; but actually, it diminishes internal democracy and accountability and the potential for corrective action. The outcome is stubborn dogmatism and a poor fit between party culture and the Constitution.

It is no secret that the ANC is now utterly dysfunctional: witness, for instance, the farce of party president and its secretary-general suspending each other in May 2021. How many ANCs are there? Mathekga observes that it comprised a set of mafia bosses during the Zuma years, ‘a marauding gang of looters and hijackers masquerading as a government’ (29). Parliament, he writes, is not a watchdog, but a puppy dog.

The author is relatively sympathetic towards Cyril Ramaphosa seeing him in the United Democratic Front tradition in his use of independent panels as a way of shaping and legitimising decisions. He argues that Ramaphosa has partly rescued the State, but failed with the ANC. The deficiencies of both mean that the young are disengaging from politics and turning to alternatives, including various types of disruption. The ANC is the weakest link in the country, although its strongest adherents regard it with religious zeal. As a result of factionalism, it has no coherent economic strategy. So, the nation’s crown jewels, its state-owned enterprises, have become what Mathekga calls ‘state capture central’. Weak institutions are barely holding their own against terminal plunder.

Amid this ongoing saga of failure, the ANC is haemorrhaging electoral support so that by 2029 at the latest it may have lost its national overall majority. This, and the loss of local support, could mean the end of centralism and the growth in relative importance of regional and local politics, argues Mathekga. This may seem perverse given what he describes as the Auditor-General’s ‘annual horror show’ in which less than 10% of municipalities receive clean audits. But this is the line taken by new political movements such as Action SA who have recognised that the locus of economic and political power is municipal, the point at which people confront the ups and downs of daily reality.

Mathekga discounts the Economic Freedom Fighters as a protest movement focused on one leader. The Democratic Alliance has the credentials to benefit from localisation, but lost its way after the easy ride of the Zuma years. The ANC has nearly exhausted its liberation movement 30-year allotment, is inevitably fatigued, and harbours some toxic figures at the highest level. Since its electoral zenith in 2004 the ANC has steadily squandered political capital.

The author’s point about regionalism and localisation is reinforced, perhaps unexpectedly, from within the ANC itself: it is becoming ever more difficult to manage from the centre and resorting to a quasi-federalism in order to hold together. In the past regionalism was feared because of the destructive potential of ethnicity, but this is now regarded as less of a problem as leagues, provinces and regions become more autonomous. At the same time the ANC is losing urban support and becoming more clearly a rural party.

Yet such is the weakness of the opposition that it is impossible to imagine a government without the ANC as dominant partner. The problem with coalitions in South Africa, Mathekga points out, is that they tend to bring together parties with common enemies, not common goals. Nevertheless, there is great potential in the rural vote for the ANC in something of a political vacuum. (Mathekga notes, for example, the enormous amounts of money invested in housing and businesses under traditional authority on unsecured land.) Far from democratic centralism, the future political landscape is suggestive of a dispersal of power to multiple centres.

Mathekga considers the virtues of the middle class, first identified by Aristotle as social glue, as the driver of democracy and development. The instability of South Africa, Mathekga ascribes to the small size of this class although he seems to downplay its black component. The ANC ignores it except to expose it to double taxation (by the State and to private companies that make up for state inadequacy). Jacob Zuma derided it in his attack on ‘clever blacks’.

Such are the overall and inexorable trends, but the December 2022 ANC elective conference will still be crucial, fought out between corruption busters and rent seekers; in other words a struggle over the control of state institutions. Mathekga sees this as a Rubicon moment. He considers the pretenders to the throne, concludes that most of them are lightweights nationally, and notes that the party often has to look to its elders. Lindiwe Sisulu is referred to as scraping the bottom of the party barrel, long-established but lacking achievement. She may not, however, be as inconsequential as Mathekga suggests. The essential characteristics of the ANC – centralism and collectivity – reinforced by traditional patriarchy and patronage systems make her January 2022 attack on the Constitution and the rule of law less maverick than may appear; a standard bearer for a powerful faction of the party.

The dispersal of political power should logically lead to electoral reform with a proportion of parliamentary seats, possibly a quarter, decided on a constituency basis. This would open up possibilities for community candidates, potentially rescue some voters from disillusionment, and reinforce the local dimension. If this and other factors were to change the political landscape, it would represent an historical earthquake releasing the nation from the twin nationalist hegemonies, Afrikaans and African, that have run South Africa for well over a century. Mathekga rejects the idea that South Africa is yet a failed state, but admits that it has some of the characteristics. A rebuilding of the centre, and of central values, is essential.

The Radical Economic Transformation (RET) faction of the political spectrum is not given much attention in this book. Indeed, its fightback after the removal of Zuma as president is characterised as lacking moral standing. But does this necessarily mean it is unpopular? There is about Mathekga’s analysis a laudable sense of rationality. But the worldwide ascendancy of populism, majoritarianism, authoritarianism and the violence they generate suggests that we are in, or entering, a new age of irrationality in which liberal democracy, even in new forms, is on the retreat. If this is the case, it will have been in large measure eroded from within.

The Testimony of Steve Biko and No Fears Expressed: Quotes from Steve Biko

A Legacy of Spies

The President’s Keepers: Those Keeping Zuma in Power and out of Prison