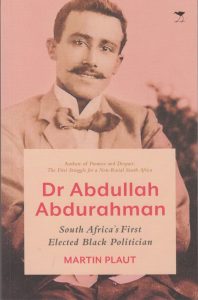 HIS funeral in Cape Town in February 1940 attracted a massive multiracial crowd. He had been a dedicated Cape Town city councillor and advocate of the poor for nearly forty years, the leader of a national political party, one of South Africa’s first black doctors, and a networker and bridge builder of note. Even more remarkable, his grandparents had been slaves. Yet in the grand scheme of national history, Abdullah Abdurahman is usually accorded a footnote role; or even dismissed as a failure.

Martin Plaut writes with his customary clarity and precision, his search for Abdurahman the man frustrated by a lack of archival material. His personal life, Plaut records, was ‘intriguing, complex and sometimes mystifying’. His wife Nellie, a civic figure in her own right, was Scottish (he trained at Glasgow University after school days at SACS), but he abandoned her for another partner, Maggie Stansfield, who barely features in this book. All his five children were very successful, most notably the politician Cissie (Zainunniss) Gool. The Abdurahman who emerges is predominately the politician and public figure whose home was a hub of intellectual and cultural activity.

His political longevity was remarkable: councillor for ward 7 District Six from 1902 until 1940 with one very short break, leader of the African Political Organisation (APO) from 1905 to 1940, and a member of the Cape Provincial Council. His political credo was essentially liberal: defence of the Cape franchise and non-racism. A social conservative with a radical intellect, he was capable of fiery rhetoric. Plaut sums him up as a man of ‘dignity and intellect’; an ‘astute politician and adept orator’. The trade unionist Leo Masholo described him as a man of ‘fair play and common sense’. His fierce opposition to racialism was matched by an equally strong attachment to constitutionalism.

His first election success is described as an ‘extraordinary accomplishment’ for a black candidate despite Cape Town’s reputation as a liberal city. Twice he journeyed to London as part of delegations to defend the limited political rights of black South Africans: in 1909 when he was a member of W.P. Schreiner’s distinguished group, black voters made up 15% of the Cape electorate. But black rights were cynically sacrificed to white South African unity and British imperial and defence interests. After the Great War the patriotism of the Cape Corps predictably went unrewarded.

In the 1920s, in spite of Abdurahman’s socialist inclinations and support of trade unionism, he was challenged from the Left by Labour and the communists. The APO’s trade union wing soon collapsed and his alliance with the Industrial and Commercial Workers Union (ICU) was to founder on the latter’s weaknesses after he had helped resolve the Cape Town dock strike and prevent Clements Kadalie’s deportation. Plaut makes the somewhat odd claim that the Rand Revolt of 1922 was the ‘closest thing South Africa has seen to revolution’, which seems to ignore the unrest of the 1970s and 1980s. Abdurahman was correct to be bitter towards white workers and regard them as the enemy. This was another occasion when he swung the APO behind Jan Smuts’ South African Party, a logical but fraught tactic.

Abdurahman’s unrelenting search for non-racial unity and opposition to J.B.M. Hertzog’s National Party was constantly undermined by conservative tendencies within the coloured community. In the 1920s they were co-opted into the Afrikaanse Nasionale Bond (ANB) with a newspaper and policies that appealed to material interests. The ANB and APO were not dissimilar, but the former endorsed segregation. The Pact government of 1924, made possible by white workers, was a major setback for the APO and Abdurahman’s political philosophy. After the National Party’s election victory of 1929 the need for coloured support evaporated as did the ANB.

By repute Abdurahman was descended from slaves from Bengal and forged close links with Gandhi and the Indian community of South Africa, the group most vilified by whites. The question of its rights was raised again by the Pact government’s Areas Reservation and Immigration and Registration Bill and Abdurahman joined a delegation in 1925 to India to encourage opposition to it. He played on British imperial interests and obligations, and in spite of a vitriolic speech at Kanpur impressed the liberal Viceroy, Lord Reading. Oddly, this was perhaps his most successful political intervention and his contribution to the Cape Town Agreement of 1927, which effectively secured the future of Indians in South Africa, was considerable. But his diplomatic and political skills went unrewarded elsewhere.

For ten years he fought the Hertzog bills which aimed to reform African voting rights, political representation and reserves; and address the matter of the coloured vote. Abdurahman saw the bills as further fraud, but an opportunity for black political solidarity. The Non-European Conference of 1927 held in Kimberley was a foretaste of the representivity of the Congress of the People (1955) and three more conferences took place by 1934 with the support of D.D.T. Jabavu. They were characterised by caution and challenged by the joint council movement, which Abdurahman rejected. He even joined an enquiry into the socio-economic condition of the coloured community, submitting a minority report that attacked segregation. By 1938, when he suffered a heart attack in his mid-60s, he was isolated politically except in his own backyard where he was revered as ‘Die Doktor’. Black unity had proved a ‘mirage’.

Cape Town’s coloured politics had become an Abdurahman/Gool family affair with the basic disagreements generational and tactical. In 1938 the two groups organised rival conferences. (It is here that the book contains its only apparent error: a Peter Alexander is clearly meant to be the writer Peter Abrahams as the footnote suggests.) Small victories against segregation continued to be won in the Cape and Abdurahman easily defeated James la Guma in the 1939 municipal election. However, had he lived to see victory in World War II, he would have witnessed the routine betrayal of coloured patriotism.

It was Enoch Powell who wrote that all political careers of any length end in failure. Abdurahman’s party folded in 1951; he failed to ‘protect the liberal order that he regarded as his birthright’; and there was to be no non-racial alliance until over forty years after his death. The reason for this he supplied himself; in 1939 speaking of an ‘age of fear, of unreasoning suspicion and of blind prejudice’. He might well have been describing our times in which politicians of moderation who believe in rational argument and outcomes are also on the back foot.

If he is to be considered a failure, this has to be shared by every other political movement of his era that opposed the racism of colonialism and apartheid. But he did leave a significant legacy. One part was his daughter, Cissie, a leading light in the National Liberation League and Non-European United Front, a Cape Town city councillor who was to die in 1963 surrounded by plaudits similar to her father’s. Her very public differences with him were more those of style than substance. Plaut does not raise the possibility that she may have harboured a grievance around the treatment of her mother. While Abdurahman may not have led people to liberation, his work in the field of education left them with the means to develop their skills. Among the educational monuments were Trafalgar and Livingstone high schools and he had played a role in the Teachers League of South Africa.

His biographer has produced a fitting, well-balanced and admirably succinct account of Abdurahman’s life. While the man continues to be elusive, his importance in the struggle for political rights for all South Africans should no longer be in any doubt.