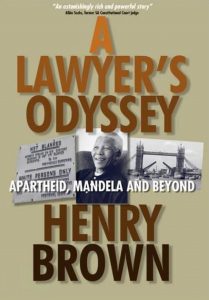 THE APARTHEID era produced a stream of political trials ranging from the mundane to the highly dramatic. It was not difficult to involve advocates and many made names for themselves. Instructing attorneys, who did not enjoy the same degree of independence, were a different matter, but this is the autobiography of one of them. He sets the tone of his book with the classic liberal credo that group thinking leads to a loss of humanity, a quality the law needs to embrace.

Henry Brown was brought up in Muizenberg’s Jewish community and moved straight from school into five years of articles with a law firm. Those were very different times and by the age of 21 he was a qualified attorney. It was 1960, a year of notable political upheaval including the march on Cape Town led by Philip Kgosana. Brown was part of the defence team in the subsequent incitement trial, the first of his many human rights cases. In 1961 he and Neville Rubin were initiators of a successful challenge to a ban on meetings and by 1963 he was acting for the detained Albie Sachs. His intervention led to detainees such as Sachs being granted certain rights that applied to awaiting trial prisoners.

Brown’s employer, FB&J, was the corresponding firm for lawyers acting for prisoners incarcerated on Robben Island. The first of these was Billy Nair. When Nelson Mandela was charged with disobeying a lawful order and laziness in the notorious quarry incident, Brown was again involved. Mandela was found guilty; but in November 1967 when he faced being struck from the roll as a listed communist he met success with Brown’s assistance and remained a lifelong attorney. In the course of his work on the Island Brown liaised with Helen Suzman.

The Eastern Cape political trials of the early 1960s remain an obscure part of the history of apartheid. The State brought multiple charges for relatively minor offences against its opponents and presiding officers imposed sentences running consecutively. Brown uncovered scores of cases on Robben Island and successfully challenged unjust sentencing that should have been concurrent. The work load was intolerable because usually each case had to be reviewed separately – the stress on Brown required medication. One assessment calculated that 158 men were saved 258 prison years. Following up these cases, he visited notorious resettlement camps such as Dimbaza.

The 1960s was a decade of unremitting apartheid repression and a parade of restrictive legislation. It also threw up remarkable feats of resistance and enduring friendship: Brown remarks on his with Alex and Blanche la Guma, for instance. In 1966, Defence and Aid, which for ten years had funded the accused in political cases, was banned and Brown was raided. He also successfully defended an Immorality Act case involving a couple and their young family on the grounds that its race criteria – appearance and acceptance – were slightly more forgiving than those of the Population Registration Act.  Lives hinged on such technicalities in apartheid South Africa.

Although part of a general legal practice, Brown continued to be involved in key human rights issues. One was homosexuality, in which he was part of a successful bid in 1968 to avert even more draconian law. The following year he played a key role in ensuring that the family of the murdered detainee Imam Abdullah Haron was able to have an independent pathologist present at his autopsy. Extensive injuries inconsistent with the standard lie about falling down stairs were confirmed at the inquest. However, the finding was that a fall had induced a heart attack and that the police were not responsible, although the State made an ex gratia payment.

This represented a remarkable record for someone barely in his 30s, but in 1971 Brown and his wife Elsa decided to emigrate to Britain and make the metaphorical move from Muizenberg to Muswell Hill (where they were near-neighbours of the Tambos) experienced by legions of South Africans. He had to requalify as a British solicitor and during the late 1970s with the help of Joel Joffe set up a practice with another ex-South African. It was busy enough to have offices north and south of the Thames, but buckled financially under the weight of legal aid cases and Brown found himself in the 1980s back with a city law firm.

Here he reconnected with (International) Defence and Aid. Money was still flowing to South Africa, but disguised as payments by a network of highly respectable British legal firms whose partners became clandestine operators. Brown had retained his legal links with southern Africa. For instance, he successfully acted for Robert Sobukwe in a libel case against Les de Villiers and reached an out-of-court settlement. He thus had the probably unique record of having acted for both Mandela and Sobukwe. In the case of South West Africa he acted for bishops Colin Winter and Richard Wood who had fallen foul of the South African regime; and for SWAPO. He also advised the Geneva-based International University Educational Fund (IUEF), which was infiltrated and betrayed by the odious Craig Williamson.

Over the years Brown had questioned the adversarial nature of legal work and become involved in arbitration, mediation and then alternative dispute resolution (ADR). This had started with family law and moved to commercial cases and was clearly more suited to a lawyer who preferred by nature and conviction the friendly, reconciliatory approach over the combative. As Albie Sachs points out in his foreword, Brown’s writing on ADR has produced book sales that far surpass his own better known titles.

Brown is refreshingly candid in this description of his career and hints that he was psychologically challenged at times. The final section of his book on mediation and ADR is something of an anti-climax and becomes pedestrian; while a list of awards and recognition sounds somewhat self-indulgent.

The value and appeal of his book lies in the extent to which he throws refreshing light on the depth and breadth of the struggle against apartheid, reminding South Africans of something that is in danger of being forgotten: liberation was won by the efforts of many ordinary people as well as organisations.