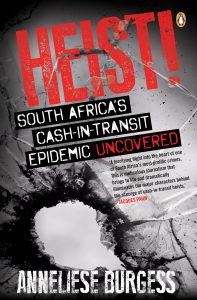 VIOLENT crime is a long-standing South African tradition and at the top of the hierarchy are the gangsters who hijack cash-in-transit vehicles. These robberies are highly organised with military precision, planned over many months, and involve numerous specialists. The objective is to seize millions of Rands and disappear to a safe house as fast as possible. The duration of a heist can be as short as ten minutes.
Anyone who gets in the way, from security personnel to passer-by, is eliminated. Intelligent planning is matched by vicious ruthlessness. In one notorious incident, three guards were deliberately incinerated while defending their cargo. The brazen behaviour of robbers, and their apparent fearlessness, is attributed to muti rituals. The influence of the inyanga penetrates deep into South African life whether it be sport or crime.
Almost all these robberies feature a ‘finger’, or inside source in a cash transit company; and the number of police officers involved is staggering. One particularly egregious example is Morris ‘KGB’ (need one say more?) Tshabalala, a convicted criminal, who managed to find his way back with apparent ease into police crime intelligence, a major weak link in the national security system.
The most lucrative prizes are transit vehicle vaults but robbers have also tackled depots with even better results. The less ambitious hit deliverymen or blow up ATMs. And those responsible are career criminals; so much so that transit companies keep an eye on prison release dates and the subsequent movements of ex-convicts. This is hardly onerous as few cases reach court, never mind a conclusion such is the familiar saga of disappearing dockets and unwilling (sometimes dead) witnesses.
Police statistics are virtually useless; and the transit companies, cutting costs to stay competitive and probably carrying more than they are insured for, paranoid and secretive in the knowledge they are negligent. So the exact scale of this criminal activity, which South Africans accept as part of the national landscape, is unknown. But 400 incidents a year and the loss of many millions of Rands is likely to be understatement. Most of the loot is never recovered and many South Africans do not regard this as serious crime, or even applaud it vicariously, although the costs are measured in human lives (34 in 2017, with 118 injured) and what amounts to economic sabotage. Indeed, there have been instances of spectators urging on gangsters as if they are present-day Robin Hoods.
Anneliese Burgess has done a wonderful job documenting this shocking crime epidemic under extremely challenging circumstances. It must take particular nerve and persistence to get close to a story such as this. Yet again the world of academia has much to learn from good quality investigative journalism. Her narrative is both precise and vivid, her conclusions a masterpiece. One of them is the fact that South Africa is awash with guns, in part as a result of the Mozambique civil war.
And, most chilling of all, the problem she documents is almost certainly greater than anyone is prepared to admit.