Deep Collusion: Bain and the Capture of South Africa 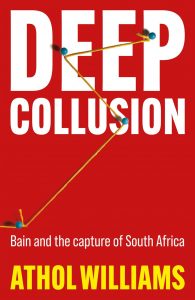 IT’S not unusual for South African whistleblowers to go into hiding overseas. The two computer technicians who uncovered the Gupta files did so to avoid the fate of a number of whistleblowers who have been murdered, the most famous now being Babita Deokaran. Athol Williams has left the country, although there has been no specific threat. He was a long-term, on-off employee of Bain, the Boston-based international management consultancy firm deeply implicated in state capture. This he defines as a point on a continuum between corruption and a coup; repurposing of public institutions for private gain that undermines the integrity of the democratic state.

Exactly how does a consultancy profit from the ambitions of a racketeering clique in South Africa? Bain’s history provides a blueprint. First, find a proving ground, a modest target like Telkom even though you have nothing specialised to offer. Second, hire as supposed consultants political fixers (these were a couple of artists calling themselves Ambrobrite who netted R12 million) with access to Number One and conduct numerous private meetings; something unheard of in legitimate management consultancy, but mutually beneficial in a corrupt relationship. Access to government information and influence over decision-making follows. Then use the Telkom rehearsal for a far bigger prize; by regular coaching and plotting with the preferred candidate as commissioner of the South African Revenue Service (SARS) a full year before his appointment.

One installed, you assist your protégé with organisational restructuring, a euphemism for repurposing designed to weaken governance and delivery capacity to benefit Number One’s criminal friends. Those likely to resist are red-flagged; others doing their jobs conscientiously in accordance with the law are sneeringly referred to as losers and undermined. In order to convert this scenario into dollars, it is necessary to extend an initial short-term contract indefinitely. This is enabled by drafting the SARS proposal and then exploiting loopholes in the regulations to rig the procurement process. Six weeks becomes 27 months; R3 million blossoms into R164 million.

The Nugent Commission into SARS sat in 2018 and there was overlap with the long-running Zondo Commission into State Capture. The damage done to SARS by Jacob Zuma’s appointee Tom Moyane (2014‒2018) and his mole Jonas Makwakwa was immense. Over 200 highly skilled personnel departed, survivors were demoralised, operational cohesion was lost, and chaos reigned to the benefit of the crooked and the corrupt. The revenue shortfall has been put at R100 billion. In the words of an evidence leader for the Nugent Commission, ‘it was Christmas for the illicit economy’. In the event, Zuma was recalled and Moyane removed (for incompetence, ill-intent and collusion) before the actual looting began and SARS literally collapsed. Neither Bain nor Moyane had any tax expertise, but they knew how to inflict structural damage on an organisation through what Nugent described as a premeditated offensive. One tactic was to mould criticism to suit a desired reorganisational outcome.

Williams first joined Bain in 1995 and was to leave and rejoin four times. He points out that there are no standards or oversight for management consultancy as with the law, accountancy or auditing, and this leaves the door wide open to the unscrupulous. Bain, through its main partner in South Africa, Vittorio Massone, designed state capture. One of the preferred methods was centralisation at a time when it was out of fashion in business. Personnel with global responsibilities were well aware of many red flags, but preferred to watch the cash roll in. When called to account, Bain covered up with the usual bland public relations statements and selective release of documents. Massone, and other key witnesses, skipped the country before finishing his testimony to the Nugent Commission thus avoiding possible charges of perjury. In South Africa Bain was less of a management consultancy than a conspirator in criminality. State capture was far more than the Guptas.

In 2018 Williams was appointed by Bain to oversee an internal investigation into their South African involvement. It became an untenable position once he discovered that the investigators were simultaneously advising Bain, which had no genuine commitment to transparency, did not intend to produce a written report, and were primarily concerned about avoiding sanction by the US Department of Justice. Williams felt Bain was acting in bad faith, but was back in 2019 with responsibility for a corporate remedy plan. Unsurprisingly, he again found that information was withheld when Bain’s global agenda required. The fact that Bain’s lawyers were erecting ‘guardrails’ around certain topics was a crass method of hiding the truth.

The company tried bribery and intimidation to prevent Williams’ final departure. In October 2019 he blew the whistle and this year testified before Zondo. The tipping point for Williams was Bain’s arrogant refusal to make amends for the damage it caused South Africa and the lengths to which its top executives went to cover up its role. The loyalty of a working lifetime was cancelled by patriotism. Williams calls Bain an ‘imperialist marauder’. Indeed, with curious circularity this was a form of neo-colonialism involving the selling of South Africa while the sellers attacked white monopoly capitalism, a concept invented by another foreign company.

The author makes predictable comments about the lonely road of the whistleblower. But he laments, in particular, alienation from and abandonment by a corporate South Africa ‘uninterested in people with integrity’. In his final words to the Zondo Commission he described South Africa as a country of the fearful dominated by bullies who create apathy. Not forgetting the support players in corruption – bankers, lawyers, auditors and others – he calls for a new era of bravery and also the blacklisting of the unrepentant guilty.

Williams did the right thing at considerable personal cost. But why did he stick with Bain for so long? The carnage at SARS was well covered by the media, yet he returned to Bain twice in 2018 and 2019, admitting that he was leading a privileged life at the intersection of academia and consultancy. And it is difficult to shrug off the connections of a working lifetime. As it happens, his final roles with Bain harvested a valuable collection of documents throwing light upon its conduct ‒ ‘unethical behaviour on an unprecedented scale’ ‒ that proved invaluable to the Zondo Commission.

Exactly who would want to harm Williams now is not clear. Presumably it is not Bain or he would have stayed at home. Sadly, we are far from any real protection for whistleblowers as the content of this carefully constructed book and the current predicament of its author suggest.

Deep Collusion: Bain and the Capture of South Africa

The ongoing saga of Mzala’s ‘Chief with a Double Agenda’

For my Country: Why I Blew the Whistle on Zuma and the Guptas