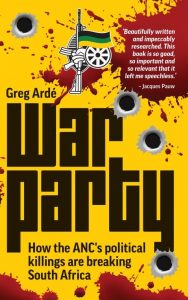 ORGANISED crime resorts readily to violence; so it is no surprise that the ANC, which Durban-based journalist Greg Ardé describes as a ‘criminal syndicate’, is bedevilled by it, often with fatal consequences. In his foreword, Sam Sole makes a comment laden with South African irony: the State in any society should have a monopoly of violence. But the ANC, with its Leninist heritage, makes no distinction between party and State.

KwaZulu-Natal, argues Ardé, is the epicentre of the problem, the mass murder of thirty years ago replaced by targeted killing linked to conflict over tenders and other spoils. ‘Murder,’ he writes, ‘is increasingly the currency of power’ as a result of cadre deployment, patronage networks and competition for a place in the food chain of corruption.

Ardé starts his account in Richmond with the violence stoked by former ANC warlord (and apartheid agent) Sifiso Nkabinde, who died in a hail of eighty bullets in January 1999 in a fashion now all-too familiar. His killers paid their prison dues and then flourished. Nowadays the killings are about the nexus that links power, politics and business. The author describes an overworld and an underworld; a façade and the brutal reality beneath. The latter has produced 90 political killings since 2015 according to violence monitor, Mary de Haas.

When necessary the corrupt are simply redeployed, competent police investigators and prosecutors reassigned, witnesses disappear or end up in mortuaries, killers walk free, and loyal cadres avert their eyes. They have good reason to do so as the life of a whistle blower is fraught. There is no one on whom to rely: ‘If you expose things,’ an ANC member explained, ‘then the soil is ready for you’. This is the system that permeates KwaZulu-Natal politics and it explains why so many of its institutions, particularly municipalities, are basket cases. Ardé illustrates this by moving from Richmond to Dundee, Nquthu and Newcastle, the last not long ago a thriving industrial hub.

The internecine strife has nothing to do with policy or ideology, but is ultimately a fight over spoils. The notorious case of the Umzimkhulu Memorial Hall left three dead. This book suggests that it is virtually impossible to judge relative probity: today’s anti-corruption crusaders can easily become tomorrow’s highly corrupted. But there are many innocent victims; for example, the schoolgirl killed when the speaker of Nquthu council, Vusumuzi Ntombela, was shot while teaching in his classroom. The occasional outspoken ANC member is farcically accused of bringing the ANC into disrepute; and hypocritical party statements about corruption would be comical if the reality were not so tragic.

Advocate Marumo Moerane, who has chaired two commissions into political killing, writes of depravity. This applies not just to bad apples, individuals unfit for public office or service, but the ANC as a whole. The veteran social commentator Paulus Zulu, testifying before Moerane, pointed out that the quality of the average ANC councillor is so low that they cling to positions at all costs without any chance of comparable employment. Local branches of the party are sites of intense contestation often leading to splits, the setting up of rival branches – and violence.

A prime source of hitmen is a taxi industry awash with money, particularly from its long distance routes, and effectively unregulated. Its bosses move around with multiple bodyguards and have complex relationships with police and politicians. The industry has many mafia-type characteristics and is a massive money laundering operation also able to move guns, drugs and killers. The hitmen (izinkabi) it employs are mainly from rural areas, into which they vanish. Ardé points out that the taxi industry is commonly assumed to be out of control; but it is, in fact, very much under control – of organised crime. Taxi associations are protection rackets well acquainted with violence and ANC politics.

Underlying the ANC’s systemic violence-driven corruption is a dysfunctional police force outnumbered by even more dubious security company employees, hostels such as Durban’s Glebelands that are incubators for hitmen, rampant theft and sale of police and army weapons, and disappearing case dockets.

After discussion of the taxi racket, Ardé ends up in Durban where contractors to the Ethekwini Metro get away with murder – literally. Killings are met with fake outrage, then inertia quickly sets in and cases go cold. Disgraced mayor Zandile Gumede, very much in the news at present, illustrates well the racketeering activity of the ANC. A versatile operator, not only is she charged with corruption in connection with a solid waste contract, but she is linked to both the construction mafia (Delangokubana, which wields AK47s on building sites by way of persuasion) and taxi bosses. Gumede is no aberration, but a perfect example of the ANC’s operational methods.

It is no coincidence that sixteen members of Abahlali baseMjondolo, Durban’s association of informal settlement dwellers, have been murdered in six years. Two ANC councillors have been convicted. Abahlali’s self-governing neighbourhoods, de facto independent of the metro, are perhaps the ultimate rejection and condemnation of the depravity the ANC represents today.

The significance of this book is twofold. First, it ties together in an overall narrative many scattered press reports. Second, it raises the crucial issue of violence. This is often the reaction of first resort in South Africa and remains one of the country’s main challenges. Yet the governing party, the liberation movement, is playing a major part in institutionalising and normalising it.