Undeniable: Memoir of a Covert War 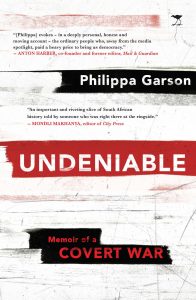 A CONSTANT presence in this book is the question of the third force. Was it, in the period leading up to South Africa’s first democratic elections in 1994, part of an orchestrated, clandestine campaign run by the government? Did it exist at all? Or was it useful cover for deniable dirty tricks by all sides to the conflict? Philippa Garson wisely leaves these questions unanswered.

Garson has written a political, professional and (highly) personal memoir of the early 1990s when she worked for the Weekly Mail. It was a febrile time particularly for Garson who had the township beat. The attitude of the paper seems to have been somewhat blasé with the editor apparently commenting that a particularly gruesome episode sounded ‘hectic’ and asking if the reporter was ‘okay’. This was an age of advocacy journalism and reading the WM every Friday was an act of solidarity and political dissidence. Working on it was clearly an unforgettable experience.

Violence was generally depicted as township (ANC) versus hostel (Inkatha); but were disguised whites aiding the latter? There is no doubt that there was security force collusion by omission and Inkatha auxiliaries were trained by special forces in Caprivi. There was also a large arms cache in Zululand, much of it yet to be uncovered, and possibly a training camp near Mkuze. Whether Renamo was involved remains unproven. Garson raises the issue of police in balaclavas, either as a matter of survival or disguise, but this had been well known as security force night attire in the Natal Midlands since the mid-1980s.

The violence suited Mangosuthu Buthelezi’s political ambitions while the third force theory was convenient for the ANC. But there were other dimensions. As Garson puts it having investigated tension between the ANC and AZAPO at Bekkersdal, there were ‘local, and often hidden, interests and alliances.’ One complication was the return of unoccupied MK soldiers to home turf now controlled by young comrades in self-defence units. Apparent earnest idealists were capable of becoming thugs. Ultimately, Garson concludes, everyone behaved like gangsters with common-or-garden revenge and tribal affiliation frequent factors: ‘orchestrated carnage’ in ravaged communities had many sources and motives. Exactly who was who was often shrouded in doubt and all sides had their ‘hardened warlords’. Within the ANC one need look no further than Harry Gwala.

Garson was threatened, shot at and witnessed sickening violence and for several years lived alongside it on a high while conducting a (then unusual) cross-cultural relationship and coping with medical problems. She witnessed police in compromising and other questionable situations, but her involvement remained that of the reporter of events, not the arbiter of political myth and reality. And she had to cope with the breakdown and suicide of her photojournalist friend Ken Carter.

Not everyone will be at ease with this heady mix of political history and individual angst. And unfortunately  Garson’s writing occasionally descends to disappointing stereotype and cheap shots. Themba from Hillbrow, who brutally assaulted a woman, is described as ‘this strong and proud warrior’; and Desmond Tutu is termed, admittedly before he starts speaking, as ‘about as charismatic as a bookish librarian’. And suggesting a possible Inkatha/AWB link on the evidence of cell wall graffiti, she several times mentions Edendale prison. There was no prison in Edendale; nor a police station with cells for that matter.

But overall Garson gets the story of this complex period right. Popular perceptions have betrayed it: thousands died and were maimed and there was no miracle, no peaceful transition to democracy. There could have been several informal and incoherent third forces, but more importantly the concept was a handy propaganda device that has survived the transition to democracy. In general, the ANC has managed the past cleverly through a conspiracy of silence and obscured a great deal of truth. Garson ends her book with the poignant thought that some level of rapprochement between Mandela and Buthelezi could have saved lives and spared a great deal of destruction.