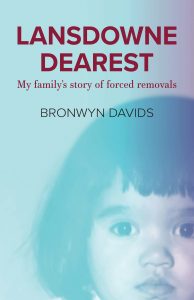 THERE has been much contestation over the definition and identity of the South African coloured community. Bronwyn Davids brings her idiosyncratic view to bear in Lansdowne Dearest, underlining the futility of any attempt to generalise the past.

From birth in 1961 until her mid-teens she lived at 10 Heatherley Road, Lansdowne in Cape Town, a four-erven plot bought by her Scottish great-grandfather, Joseph McBain, in 1919. Her other great-grandparents are described as mixed Afrikaans, Portuguese and Madagascan; the sort of mixture that cannot be uncommon. The Lansdowne house is the centrepiece of Davids’ account, ‘an expressionist work of art’ in which English was the official language with Afrikaans used for ‘emphasis and exclamation.’ But the ‘men in white Volksies with GG number plates’ were increasingly evident, ‘suitably attired in the pinnacle of Nationalist sartorial elegance’, creating ‘thirty years of upheaval’.

Her parents left Lansdowne in 1976 under threat of group areas removal to live in the new coloured city of Mitchells Plain, but she continued to inhabit both worlds through attendance at Livingstone High in Claremont. The death of her grandfather Jack in 1980 meant the forced sale of the Lansdowne property, which was demolished to accommodate white housing. Subsequently, much of the extended family archive was destroyed by a distant relative as ou goed (old things). This is a saga of historical erasure. Davids’ book is, nevertheless, well-illustrated.

In many Cape Town places segregation appeared not to exist: ‘apartheid seemed to be largely about toilets and benches.’. Far-sighted coloured people were able to sell early on at market value. Others made assumptions, wrongly assuming Lansdowne might be safe. Davids’ wider family were a disparate group and ‘appearances always came first in the community I grew up in’. Her close relatives were apparently too busy to bother. Social distinctions were deeply etched and depended a great deal on addresses. However, within neighbourhoods a spirit of solidarity heightened as apartheid measures tightened. Music was a ‘protective layer of warmth’, although ‘it didn’t work very well’ as removals and departures, many for overseas, continued. Connections with rural relatives remained strong.

The author’s observations suggest that many people led full lives constructed around and in spite of apartheid: ‘Classics and language and Shakespeare and God and flowers and cake and tea’ were ways of avoiding being boxed in. But with great insight she observes that these are people many of whose ancestors were displaced and misplaced. Forced removal was an ‘ultimate wake-up call.’ Davids mentions, but does not elaborate on, the incidence of depression among coloured people as a result of dislocation. Adults in her childhood ‘inhabited a dark churning sea of problems and emotion too hard for little people to fathom.’

Yet her memories are apolitical and matter-of-fact. She ascribes racial animosity to ‘teachers, the intellectual types and the nouveau middle class who had more to lose.’ For most people the struggle was largely invisible, although fear of the authorities created a great deal of paranoia. Davids emphasises the sheer complexity of politics in the coloured community of the Western Cape, which she imbibed via hearsay. It made her feel dizzy. And hers was a world run by adults: children were not consulted; they simply followed. Some arrived home from school to find their homes empty, their families moved, and a neighbour to pass on the news.

The family of one of Davids’ aunts was classified white and would drive down from Johannesburg in a ‘pale-blue Chevy straight out of a “braaivleis, rugby, sunny skies and Chevrolet” advert.’ The white portion of the family was wryly referred to as recalcified. Davids describes this schism as like having family who had emigrated and left old lives behind, except that they were still in the same country.

This is not a particularly well-organised book. And it contains some obvious errors such as Healy Hutcheson (Hely-Hutchinson) dam on Table Mountain. This is strange as the author clearly uses the Internet. Nevertheless, Davids’ memories are highly enlightening and she has frequent deft and vivid turns of phrase. As a young reporter she covered violent protests in the 1980s and remembers their aftermath of ‘deafening silence’ akin to that after forced removal; a ‘metaphor for the apartheid era’s lingering death.’

We live in a noisy nation, but perhaps silence is the real legacy of South Africa’s past.