The Terrorist Album: Apartheid’s Insurgents, Collaborators, and the Security Police 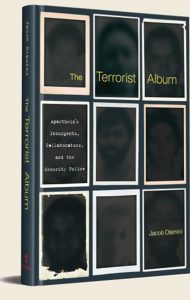 DURING eight months in 1993, following a verbal command to destroy all operational records, South Africa’s state security service, police and military immolated in Iscor furnaces 44 tons of documents (a ‘paper Auschwitz’) and film. Only the Department of Justice Security Legislation Directorate (and a few police security branch (SB) offices including Pietermaritzburg) failed to comply. Consequently, the surviving official record of State activity directed at the anti-apartheid and liberation movements is highly fragmented, often suggestive rather than substantial.

The SB over 25 years produced a ‘Terrorist Album’ (its official title) comprising up to 7 000 mug shots of opponents of the State who had left the country, most of them illegally. Later the responsibility of section C2 at Vlakplaas, five hundred copies of the album were produced and regularly updated; but only three survive, two of them in public archives. It is this document, representing the daily diet of the SB, which Jacob Dlamini subjects to fascinating analysis.

A few SB officers, for a variety of reasons, deplored archival destruction. The album and supporting files represented painstaking work that showed for some the efficiency and competence of the SB. Others felt the archive was a valuable historical resource that would have given the SB’s work ongoing traction. The main theme of this book is that neither argument stands scrutiny, but that the album does provide a telling insight into the mind and methods of apartheid’s SB. Its militaristic approach Dlamini (and, apparently, some generals) ascribe to police involvement in the Rhodesian insurgency of the 1970s. In the long tradition of colonial policing it served the government; rather than the law.

Anyone who interacted with the SB knows that they committed major errors, which made them no less dangerous. There is a stack of anecdotal evidence that the right hand had little clue what the left was doing and some activity could be described as whimsical. The album failed for two decades to disentangle Aboobaker Ismail (MK Rashid Patel) and Barry Gilder (bizarre because Ismail had left the country legally through passport control); and the picture representing Sue Rabkin, much photographed during her court case, was that of her sister-in-law Hilary. Dlamini argues, controversially, that South Africa was not a police state. There is some justification for such a view as the SB’s first knowledge of some individuals was limited to the fact of their sudden disappearance followed by a protracted search for a photograph and information. And there is a strong case for arguing that ANC efficiency and creativity often wrong-footed the SB.

The word terrorist, like communist, was used in illiterate fashion to stigmatise those opponents the apartheid regime regarded as political and social deviants. Like all authoritarian ideologies apartheid thrived on categorisation, classification and stereotyping: a ‘neat framing of dissidence’ as Dlamini puts it. Each of the album’s entries represented a (hidden) individual life story reduced to one pejorative word; and its index then assigned them to apartheid’s various categories, primarily racial. This simply reinforced the SB’s preconceived and prejudiced assumptions about the fixed nature of ethnicity. They saw what they wanted to see, needing a simple narrative for each of their enemies.

Apartheid’s functionaries were fascinated by appearance reflected in the very nature of this album, although its photographs were frequently badly out of date, often based on dompas applications and sometimes unrecognisable for the subjects themselves. The SB were also obsessed by personal history: numerous accounts of arrest and detention mention compulsory autobiographical writing, often repeated if deemed insufficient or inadequate. But the SB’s records are a flawed, unreliable historical resource. Incoming information from people whose identity is generally hidden was burdened by many agendas. The standard pattern for captured insurgents was rough interrogation often involving torture, then an apparently civilised discussion around the album. Some captives, like Glory Sedibe kidnapped from Swaziland, spent weeks looking at it. The SB had their own angle, which included vilification and slander of those regarded as deviants. This included people like the writer Bessie Head who left the country on an official exit permit. SB double agents such as Craig Williamson, who helped some of the album’s inhabitants like Eric Abrahams over the border, were included in the album to bolster their credibility.

SB information gathering covered a wide spectrum from the strategic to the mundane, and included the trite and salacious: ‘the petty and the grand went together in apartheid’. It represented raw, uncontrolled power based on a self-image of omniscience. Dlamini has written before of the intimacy created between policeman and dissident, captor and captive. It was a personalised bureaucracy, not unacquainted with human caprice, derived from interrogation, note taking and the inevitable autobiographical writing, and the frequent perusal of photographs. Similarly, this was a world not of clarity but of greyness and shadows; messy and often indistinct dramas as Dlamini demonstrates in the case of the Maponya family in which a father informed on his sons. This in turn raises the tricky issue of black complicity with the apartheid system while necessarily focusing on its crime against humanity and avoiding moral relativism.

Overseas publishers frequently stumble over South African detail. The most obvious example in this book is BOSS: Bureau for (not of) State Security based on its original, Afrikaans name. But there is a more general error. Dlamini writes about the meaning of asterisks in the album’s index. In a footnote these are transformed into the Gallic cartoon character, Asterix.

While Iscor’S facilities created a gaping hole in the archive and thus South Africa’s history, surviving relics still tell a great deal. Dlamini uses the analogy of a crack through which to peer into the nation’s past. Apartheid was based on law, bureaucracy and paper – and sealed by brutality. The ‘Terrorist Album’ demonstrates to us the nature of its paranoia.