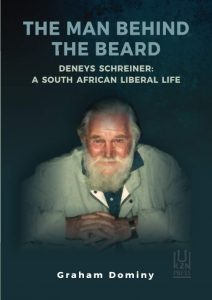 COURTESY of Covid-19 and lockdown of the UKZN Press, I collected my review copy of this book in the street. The handover took place a couple of metres from the spot where Deneys Schreiner, University of Natal (Pietermaritzburg, UNP) campus vice-principal, used to park his old grey Peugeot station wagon on the verge. It was not just a matter of convenience: he had a principled objection to reserved, on-campus parking. This book is a record of the life of a significant, cautious, ‘gentlemanly’ South African liberal who disliked the political limelight; and it is also a reminder about our universities in a very different time.

Graham Dominy sums up Schreiner as a man ‘guided by principles rather than by ambition’ (p. 6). He was faithful to a lineage noted for service and strong character; and the evidence Dominy presents, and the memories of Schreiner’s colleagues, amply bear this out. Dominy speculates that these very qualities may have prevented Schreiner becoming principal of the University of Natal. But a biographical summary that reads ‘a good man, a fine scholar and a clever thinker’ (p. 199) is ample compensation. And his memorial stone inscription ‘Nihil illegitimae carborundum’ translates as ‘Don’t let the bastards grind you down’. It would have amused him no end.

He was part of a national political and intellectual aristocracy; and Dominy intriguingly compares the Schreiner family with the Huxleys. Deneys Schreiner’s great grandfather was a LMS missionary; his grandfather W.P., premier of the Cape; his great aunt Olive, the novelist and feminist; and his father O.D., an appellate division judge who held out against the removal of coloured voters from the electoral roll and thus destroyed his chance of becoming chief justice. Throughout this lineage is a very strong thread of liberalism. Significantly, the family had no time for Cecil Rhodes.

Schreiner served in the ranks in the South African 6th Armoured Division in Egypt and Italy in World War II having attended University of the Witwatersrand (Wits). This was followed by postgraduate work in chemistry at Cambridge University and Pennsylvania State College, where he worked in the Low Temperature Laboratory. This was the era of McCarthyism and Schreiner had to find a way around the required loyalty oath. It was a precursor to similar ideology he was to confront back home; for example, the malign Schlebusch Commission.

Apartheid was tightening its grip and he stopped shaving in 1956 to protest against the loss of the coloured vote. Amid considerable publicity the ‘formidable and iconic beard’ (p. 20) was removed in April 1994, but it soon reappeared. Schreiner had been involved as a serviceman with the Springbok Legion, became a founder member of the Liberal Party (the wing that supported universal franchise) in 1953, joined the Citizens Committee and helped the cause of the 1956 treason trialists, and in 1957 marched against the Separate Universities Bill. After the Liberal Party was forced in 1968 to disband, he never again joined a political party.

From 1953 to 1959 Schreiner worked at the Bernard Price Institute at Wits where he was involved in the chemical dating of rock strata. He was not happy there and moved to UNP as professor of inorganic and analytic chemistry. He was to remain at UNP for the rest of his career. Not much is recorded in this book about his academic years save that he was famously involved in building a mass spectrometer, a feat of ingenuity that serves as a metaphor for his later administrative role.

Schreiner fought consistently for the autonomy of universities and their racial integration. He subscribed wholeheartedly to the open university dictum that they should have total freedom to determine what should be taught to whom, how it should be taught and by whom. His diligence as a committee member led to the deanship of the Science faculty and then campus vice-principalship from 1975. As a result of the fuel crisis, the campus gained greater autonomy and Schreiner took on a bizarre range of responsibilities including, as he wryly noted, the drains.

As a young member of staff, I remember well Schreiner’s often provocative delight in semantics and his devil’s advocacy, something that apparently also irritated his family. One could leave his office in despair only to find a few days later that he had arranged exactly what you wanted. It was also necessary to repeat correspondence as he sensibly regarded this as evidence that an issue was serious. Dominy records Schreiner as shy, although this was well hidden. Oral evidence shows that he was an influential and wise mentor to students and he, with other left-wing staff, joined campus protests. His physical presence and calm, easy-going manner imparted courage. The famous photo of the anti-Quota Bill march of 2 June 1983 sums up the determination of the times. During the State of Emergency from June 1986 Schreiner dealt effectively with the police security branch, for example over a hoax pamphlet, and he and his wife Else gave shelter to the Gqubule family.

Some students such as Rhodesians with experience of the bush war presented a challenge that he dealt with firmly but compassionately given his own experience of war. He started the gender integration of William O’Brien residence to civilise it. It was a time when wise ad hoc decision making was widely respected. And much of this took place in an atmosphere of mutually appreciated humour unknown today, although the campus was not devoid of dispute and rancour. Schreiner personified a time when it was a hive of creativity, intellectual endeavour, outreach and social relevance.

Without party political affiliation, Schreiner became an important facilitator of innovative political debate about constitutional models. The best known was the Buthelezi Commission, which Schreiner chaired. While deeply flawed, with contorted terms of reference, it was a black initiative and refreshingly open. Its support of consociationalism was a compromise not shared by Schreiner and contemptuously rejected by government. Schreiner’s relationship with Buthelezi deteriorated over the Inkatha pledge among other issues; and Desmond Clarence would chair the KZN Indaba.

Not long before his retirement in 1987 Schreiner’s daughter Jennifer was detained in Cape Town for MK activity and until 1991 he was involved in support of the Rainbow trialists in Cape Town.[i] He died exactly 14 years after the beardless election day of 1994, having spent his retirement supporting the Tembaletu Educational Trust and local artists. A gallery at the Tatham is named after the Schreiners.

While Dominy has done a sterling job capturing the essence of Deneys Schreiner and his times, the historical background is not quite so impressive. Many historians would be surprised to read of the 1973 Durban Moment as ‘a few illegal strikes’ (p. 113). Peter Booysen is mistakenly referred to several times as Piet; Sharpeville appears with just a single ‘e’; and the United Democratic Front was not banned in 1987, but restricted.             This is a significant addition to a growing number of biographical works on prominent liberals with Pietermaritzburg connections – Edgar Brookes, Alan Paton and Peter Brown, for instance – who helped make the city a little different, a small island of multiracialism and relative tolerance through years of neo-fascist repression. Other biographies are awaited, most notably for the Colins, Gardner and Webb.[ii]