The Knock on the Door: The Story of the Detainees’ Parents Support Committee

Terry Shakinovsky and Sharon Cort with Lauren Segal, The Knock on the Door: The Story of the Detainees’ Parents Support Committee (Johannesburg: Picador Africa, 2018) 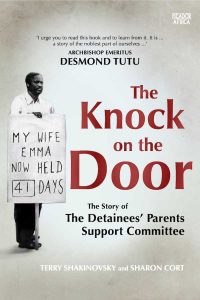 DURING the 1980s, in its desperate attempt to delay liberation, the government turned South Africa into an outlaw state. Some of its opponents it murdered; thousands were simply locked up without trial and subjected to physical and psychological torture over prolonged periods.

In September 1981 relatives of the detained gathered in Johannesburg to found the ambiguously named Detainees’ Parents Support Committee, which was inspired by the Argentinian Asociación Madres de Plaza de Mayo. For ten years, in the words of Desmond Tutu, the DPSC shone ‘a light into the darkest places of apartheid’ with ‘steely determination’. It was a democratic, grassroots organisation, personified by the doughty Max Coleman whose steely and uncompromising attitude to the police special branch became legendary. Even hardened torturers like Andries Struwig blanched when Coleman threatened him with personal reckoning.

DPSC started as a welfare organisation but rapidly took on a political role that led it to become one of the founding members of the United Democratic Front. One of the initial problems was tactical disagreement between parents, or them and detained offspring. Initially sheltered by Wits University to provide material and psychological assistance to detainees and their families it became the hub of an extensive legal, medical and media network likened by Daphne Mashile-Nkosi to Noah’s Ark. Famously, some of its work took place at tea parties that the authorities found difficult to disrupt.

Above all the DPSC collected information with meticulous care in an age of relatively primitive technology and used it to inform the international community of the government’s assault on human rights. Its archive eventually provided groundwork for the Truth and Reconciliation Commission of the 1990s. A DPSC dossier on torture published in 1982 showed the government to be guilty of systematic lying. But information took on other forms: smuggled into as well as out of prison. And DPSC also published advice on handling prolonged detention for which many a detainee was subsequently grateful. At times the DPSC office became a casualty clearing station as the victims of state repression were too wary to go to hospitals.

One of many key issues concerned the publication of detainee names under the state of emergency of June 1986. Publicity and common knowledge were reckoned to be insurance against disappearance but gazetted regulations apparently precluded newspaper listings. The government unwittingly declared in a fit of moral justification that it informed the family of every detainee and this was seized upon by the DPSC as publishable common knowledge. Harvey Tyson of the Star was an editor prepared to take risks as were Anton Harber and Irwin Manoim at the Weekly Mail. Nevertheless, the emergency gave police and army virtually unimpeded access to any space and unlimited powers of arrest that stretched human rights organisations to breaking point. Opposition to the government had been criminalised.

The government was deliberately careless in its use of language, branding DPSC and its affiliates terrorist organisations. At least two DPSC members were murdered by the State: David Webster, a co-founder who at the time of his death was ironically researching death squads, and fieldworker Sicelo Dlomo; and its Khotso House offices were bombed. But this book shows how a resourceful civil society organisation can effectively confront injustice: effective news handling made sure detention without trial became a very public matter. Like canny activists in other human rights organisations, DPSC knew the government was concerned about image and especially worried about its reputation in the West. It also knew how to judge when to take risks. Consequently, many South Africans owed their lives and sanity to the DPSC.

However, while DPSC was an umbrella body for two dozen affiliates nationwide, there is a decided Johannesburg bias to this book. Nor is there a convincing explanation how DPSC effectively merged with widespread Detainee Support Committees (DESCOMs) that were initially more politicised. In February 1988 the government restricted the DPSC and 16 other organisations so severely they had to continue their work under other guises; but they were not banned as the book’s timeline suggests. There is also confusion over when the last emergency detainee was released.

DPSC fought a ‘heroic battle against a powerful state’. This book focuses mainly on the individuals involved in a story yet to be fully documented, but it is nonetheless a vital contribution to an appreciation of our recent past.