Mpumelelo Mkhabela, The Enemy Within: How the ANC Lost the Battle against Corruption (Cape Town: Tafelberg, 2022) 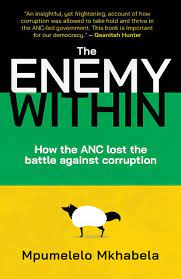 YET another book on corruption in South Africa? The value of this one lies in its analytical approach and attempt to explain just how South Africa’s main liberation movement could have strayed from its self-declared moral high ground to its current status as a party of looters. Journalist Mpumelelo Mkhabela points out that the courts were calling corruption a pandemic years before Covid-19. Then two pandemics collided head on in 2020.

Mkhabela locates the start of the rot in 1996 when Bantu Holomisa was expelled from the ANC and sacked from government for reporting to the Truth and Reconciliation Commission the corrupt activity of Stella Sigcau who had accepted a bribe from the casino king, Sol Kerzner. There were other revelations, but the ANC punished the whistleblower to protect powerful allies. Some regarded bribes as traditional; others saw Holomisa as marginal to ANC culture.

This is a crucial point and begs the question why Mkhabela does not venture back into ANC exile history. One of the causes of dissatisfaction among MK soldiers, which spilled over on occasion into mutiny, was corruption among some officers. Joe Modise was a Soweto gangster who pursued a life of crime while MK commander. The ANC and corruption have a long acquaintance. Nor was Nelson Mandela innocent. He sided with the corrupt and politically inept Sigcau against Holomisa and then permitted the arms deal whose very existence was premised on kickbacks. South Africa had no need of arms, especially the ones it actually purchased.

By the turn of the century, argues Mkhabela, a ‘perfect storm of corruption’ had developed as the ANC was overwhelmed by dodgy careerists rather than the disciplined members it professed to value. This was in spite of the rhetoric of Thabo Mbeki. He described ‘moral mayhem’ created by ‘deviants and parasites’. A torrent of preventative legislation was enacted.

Yet Mbeki undermined his own campaign by arguing that capitalism was at the root of corruption and that the mainstream press was racist in pursuit of the corrupt. He completely missed the point that all economic and social systems are vulnerable to corruption, which has no specific racial characteristics. Many of those involved in South African corruption have been white. But Mbeki chose to accuse the press of being ‘fishers of corrupt men’ and targeting blacks. Not only did he eschew the role of fisherman but did his best to protect his corrupt comrade, Jackie Selebi. He, the corrupt policeman, threatened the foundations of the democratic state. Instead, the diligent state prosecutor, Vusi Pikoli, was dismissed. Like much of Mbeki’s engagement it took strange twists and turns, lacked consistency, and showed an unwillingness to face reality.

This set the scene for multi-layered corruption under Jacob Zuma, increasingly at local government level and frequently accompanied by lethal violence. Where competition over tenders was concerned killing became profitable and the ANC congealed around patronage networks. The distinction between business and politics was blurred and state procurement was conveniently centralised. In the case of Gavin Watson’s Bosasa, corruption became the business model. Even Madiba’s memorial service budget was pillaged.

One of the reasons for this rotting away of the ANC was its Leninist failure to separate state at any level from the party. There is no independent civil service, although individuals may act honourably and professionally. Bonds going back to the days of exile, and perhaps passed down through the generations, protect the guilty. Bathabile Dlamini famously declared that the ANC needed to keep its skeletons carefully hidden away. Another example of placing the ANC before country is found in what Mkhabela terms political insurance. For example, Cyril Ramaphosa has hinted at the illegal behaviour of opponents in order to whitewash his own funding. Zuma cast aspersions on the Nelson Mandela Foundation. Condonation of corruption is so pervasive that the convicted criminal and liar Tony Yengeni is a hero to some. Zweli Mkhize, forced to resign from government over Covid corruption, stood as a serious candidate for ANC president at the 2022 elective conference.

As corruption accelerated within the ANC and threatened the basis of the constitutional state, the anti-corruption rhetoric and policy making intensified; a form of organisational schizophrenia. A parliament of deployees proved toothless and the National Prosecuting Agency and the South African Revenue Service were deliberately incapacitated. As Mkhabela describes it, ‘Zuma conferred actual and ostensible authority to steal public resources’. It is no coincidence that every aspect of the Nkandla homestead upgrade was unlawful; yet the entire government closed around Zuma in opposition to the public protector. The nadir of corruption was reached when the Gupta brothers narrowly failed to capture the national treasury; and disaster was averted at the eleventh hour.

Mkhabela points out that the ANC favours the use of metaphor. And he shows that for years the metaphorical tone has deteriorated to reflect warfare in the party over access to resources. Dog and snake have become frequent terms of abuse and the burning of T-shirts an aggressive form of protest. Mkhabela reflects on a ‘decaying metaphorical journey’; while court judgments have recorded ‘putrefaction’. Above all, the metaphors have become openly violent. Meanwhile ‘corruption pays handsomely’, especially since arrests and convictions are relatively rare. Those who end up punished consequently adopt an attitude of aggrieved victimhood, claiming they have been politically framed. State resources are perpetually tied up in investigations and commissions.

The threat to constitutional order and the rule of law continues to grow. The struggle against apartheid long ago became the struggle for tenders. The ANC is not simply host to the corrupt; it is a thoroughly corrupted organisation. And in turn a new group of heroes ‒  whistleblowers ‒ has emerged to fight corruption: Mkhabela names Cynthia Stempel, Athol Williams and Themba Maseko as a representative sample. The numbers are small, though, and the risks high and various. Most of society prefers not to know, but a new era of struggle has begun.