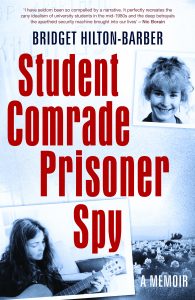 WE are reminded by Timothy Garton Ash, journalist and academic expert on central Europe, that ‘the key to betrayal is trust’. And this is a book about that archetypal event of apartheid South Africa: betrayal to the security police by a member of a tight-knit group of student dissidents who believed they could trust one another. The betrayer, Olivia Forsyth, has already had her say.1 Bridget Hilton-Barber writes as one of the many betrayed during those febrile days of the 1980s at Rhodes University in Grahamstown.

The Eastern Cape – Port Elizabeth, East London, Grahamstown and the small towns of the interior such as Cradock and Fort Beaufort – was recognised at the time as the crucible of the struggle. Grahamstown in particular was not only a hotbed of anti-apartheid activism but displayed what Jacob Dlamini memorably portrays as the ‘fatal intimacy of apartheid’, the inter-connectedness that made (and makes) South Africa such a complex place.

Hilton-Barber describes Grahamstown and its university in the 1980s in great detail and mentions many names. It is an intensely personal book and the reader soon realises that it is as much a work of personal therapy as historical record. Her apparent acute recall of events and conversations is hard to credit, although she has numerous witnesses to call upon. And her use of expletives is excessive; acceptable no doubt in therapy, but questionable except in moderation in a published book. At one level, it is an interesting and informative read; at another, a writer’s indulgence. But this book has two noteworthy strengths: a vivid account of anti-apartheid and student life at Rhodes University as white rule reached its crisis point; and an equally informative account of life in prolonged detention without trial.

Much of what went on in student protest politics in apartheid’s last decade was naïve. But there is no doubting the courage and conviction of its participants who, barely out of school, took on adult responsibilities and behaved with farsightedness to bridge the artificial divides created by apartheid. And they did so in the knowledge of the vicious, sometimes murderous, inclinations of the State. Reflections on Rhodes University at this time evoke memories of 1960s counter-culture mixed with an intense commitment to human rights and political liberation. Looked at from today’s perspective it was a remarkable time that deserves the greatest retrospective respect. It was replicated on the campuses of all English-medium universities, but nowhere so intensely as at Rhodes.

That Hilton-Barber, who by her own admission was a run-of-the-mill student activist, spent as long as three months detained without trial at Alexandria police station, North End prison, Port Elizabeth and Fort Glamorgan, East London is testimony to the sheer viciousness of the security police in the Eastern Cape (in Pietermaritzburg, for example, very few students were held for more than 14 days). The author is open about the fact that as a whole (although there were exceptions) white female political detainees were not physically abused even by the notorious, deranged Spyker van Wyk whom she was unfortunate enough to meet.

But detention without trial was by definition a form of psychological torture: no one could tell exactly how long they would be held or why. To add to this abuse Hilton-Barber was subjected to a well-rehearsed police trick: led to believe she was being released, she soon learned that she was to be transferred. The sheer banality of detention is highlighted by the account of the successful fight for knitting rights by women detainees at Fort Glamorgan prison. Group knitting was eventually allowed but even something so innocuous had to be struggled for. As Hilton-Barber points out she was just 21 when she was subjected to an experience that would test the toughest activist and it is very obvious that detention made a long-term detrimental impression on her. This book is a means of closure.

And what of the seductive Lieutenant Olivia Forsyth of the South African Police Special Branch, Hilton-Barber’s student friend? Forsyth left Grahamstown in 1986 ostensibly to defect to the ANC in Zambia but possibly to carry on her SAP work. Her role as double or triple agent remains unresolved. Hilton-Barber is able to throw no further light on her but, more importantly for this book, never really gets to grips with her nemesis. In Agent 407, Forsyth famously asserts that ‘no one died as a result of the information I passed on’. Hilton-Barber justifiably says that ‘her actions certainly caused something to die in each of us who was put away … And so, for me, at least, there is no possibility of an olive branch’ (p. 216). Both of these women were complex characters living in complicated times, choosing different sides of an intense political struggle. One betrayed the other knowing full well what the consequences would be. Given the subsequent personal cost, and the fact that Forsyth has not exactly come clean about her history, rejection of reconciliation is understandable.

Zebra Press is an imprint of Penguin Books, which has been guilty in recent years of editing and proof reading lapses. The standard of this book is good but there is one surprising entry in the glossary: bandiete are described as bandits. No doubt they are, but in the context of this book the term is prison argot for black convicts.