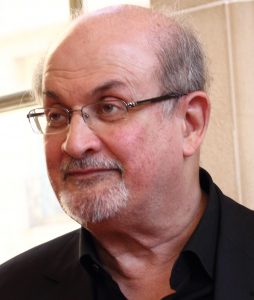 in the late 1980s, Salman had been invited by the Congress of South African Writers (COSAW) to visit South Africa.   COSAW however was not in a position to guarantee his safety from his religious detractors, and so the invitation lapsed. Having gone into hiding for 20 years, he came out of the cold and last week survived an attack in the full glare of the public eye.

Nothing has changed.   In fact, as Ismail Lagardien, points out in the Daily Maverick, the pressures on authors have become much more subtle, insidious and alienating, something we all need to be aware of when writing.

But nobody says it better than Lagardien (click on title of his essay : “As writers, we do so at our own peril, especially if you stay behind principles — like getting as close to the truth as possible and defending it — and brace for the worst coordinated forces that batter you from all sides. few months ago, a friend and fellow writer recalled to me something that was said by someone whom I cannot recall at the moment. It went something like this: “When a writer is born, the family dies…”.

In the days following the cruel and merciless attack on Salman Rushdie, and the savage criticism of “the liberal” press I have thought hard and long about that reference to “when a writer is born, the family dies.” The same, I guess, can be said about everyone with whom we share a multiplicity of affiliations Of course, nobody is born a writer. Once you start out on the road to writing — the privilege of becoming a full-time writer, especially — and if done well, remaining loyal to sound principles that include critical thinking is difficult, but to the writer, it can be fulfilling…”