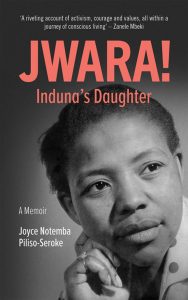 THE AUTHOR of Jwara!, a clan name, was born in 1933 into her father’s second house, part of the Eastern Cape African Christian bourgeoisie. Her father, Hannie Booi Piliso, was assistant compound manager at Crown Mines in Johannesburg; her mother a teacher. So Joyce Piliso-Seroke grew up on the mine where her family stayed after the death of her father in 1947.

She was educated at Methodist institutions, Healdtown and Kilnerton, of which she writes with considerable respect and fond memory. Clearly the system of missionary education had a great deal to commend it, even though influenced by segregationist thinking of the times. She had a brief interlude at Wits University hoping to become a social worker, but moved to St Francis College at Mariannhill to study science subjects to which she was unsuited. Eventually with the help of a bursary she attended Fort Hare University, graduating in 1957 with a BA having survived the years of institutional turbulence.

The reason for her erratic higher education was patriarchy. Clarence, a brother from her father’s first marriage, was a doctor in Birmingham who paid her fees and insisted that she take medical subjects. Even in the African middle class, young women were severely constrained in terms of career choice and she had to exert great determination to become a social worker. Her uncle, the new Crown Mines induna, also exercised considerable authority over the extended family.

For several years Piliso-Seroke worked as a teacher at Wilberforce Institution and Orlando High School. This was followed by a postgraduate diploma at Swansea University, then the start of a career with the YWCA. Given its staid reputation it is ironic that this was Piliso-Seroke’s gateway to a lifetime’s commitment to gender activism. South Africa’s white YWCA had broken away from the world organisation in the 1930s leaving a multiracial body affiliated globally that involved a few liberal whites. When its headquarters finally settled in Braamfontein (Johannesburg) in 1970 it came under the influence of a number of radical organisations such as the South African Council of Churches and Institute of Race Relations, and the Black Sash.

The author was present in Soweto on the first day of the uprising, 16 June 1976, and held without charge for four days with a colleague for assisting a young woman caught up in the violence. Later that year, as a member of the banned Black Women’s Federation, she underwent several weeks of preventive detention at Johannesburg Women’s Prison. Conditions were grim until the International Committee of the Red Cross intervened and she was released on 31 December 1976.

By sheer fortune Joyce met Nelson Mandela at Bishopscourt on the day of his release from prison and she later went on to play roles with returnees, in voter education, and with the Independent Electoral Commission. Then she worked for the Truth and Reconciliation Commission and makes some pertinent comments about unfinished business in the light of imbalance between the amnesty and reparations and rehabilitation processes. She also records threats made to the commissioners.

Her crowning position was an eight-year stint as chair of the Commission for Gender Equality (CGE), one of six Chapter Nine bodies and often regarded as their toothless Cinderella. It had to deal with a massive weight of issues such as patriarchy, child maintenance, violence, traditional practices like ukuthwala (female abduction), and belief in witchcraft. Lack of funding was clearly a major problem at the CGE, but there is a disappointing lack of detail about the institutional and staffing problems that were rife. She is, however, courageous enough to admit that some women willingly act as oppressors in the name of tradition.

This is an example of the encyclopaedic approach to autobiography: no detail is spared and there is a bewildering array of photographs crammed with people (many of them of women wearing large hats). They are undated, but clearly not in chronological order, and some captions are incomplete. At well over 400 pages this book probably contains an excess of detail for the general reader. There are too many by-ways in the highways of the text. Indeed, it is more of a tribute to a family than straightforward biography, although the family tree is strangely silent on some dates of birth and in the text brother Clarence erroneously dies in 1994.

There are a surprising number of typographical errors and the editorial process has let the author down. She has clearly, and unsurprisingly, forgotten her British geography. And there are factual errors of history: the Black Sash was not founded in 1950. There are misnamed organisations such as the University Christian Mission, Dependence Conference or alternatively the Detainees’ Dependence Programme (SACC), Community Agency for Special Enquiry (CASE); and perhaps worst of all Winnie Madikezala Mandela (p. 319). Such glitches could easily have been avoided and are surprising in a book produced by a major South African publisher.

The author makes some dubious claims. The apartheid regime was brutal, but its security forces did not kill ‘thousands’ of people (p. 303). And there is also a strange statement that ‘Back then [date unspecified], voting rights for Blacks were virtually non-existent because they did not belong to political parties’ (pp. 379–380).

Nevertheless, this book offers interesting insights into South Africa’s complex history. First, it provides an inside view of the African middle class of the mid-twentieth century and the abusive contempt it suffered under apartheid. Second, it provides further evidence of the variety of forces that brought down apartheid – clearly the YWCA played its part – and the degree to which they worked together. Third, this is a roll call of eminent black women who resisted both patriarchy and political oppression to contribute significantly to liberation.

There are a couple of ghosts at this autobiographical feast. One is literal. Joyce’s brother Darbie Dumakude) who disappeared in Britain in the 1950s and was never traced. The assumption seems to be that he joined Umkhonto we Sizwe (MK) and perished somewhere behind the Iron Curtain. The other is metaphorical: the author’s nephew, Mzwai Piliso. He appears in these pages as just another member of the extended family, but his name will be recognised by anyone with a passing knowledge of MK. As the head of security and intelligence, known as NAT or Mbokodo, he played a sinister role in the Angolan camps where he supervised the beating of detainees; and is implicated in assassinations. He was also the originator of damaging accusations about a cabal in the United Democratic Front that resonate to this day.[1] There is no reason for Piliso-Seroke to mention this, but it does illustrate the pitfalls of this personal approach to history.

Publishing should be for social and disciplinary impact

The rise and fall of South African cultural policy: The lessons we learnt from Australia (and then forgot)