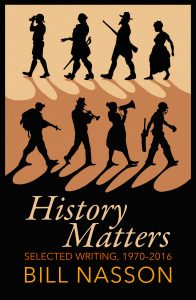 SOMETHING of a self-indulgence? Many might regard auto-anthology in such terms, but would surely excuse a writer of Bill Nasson’s exceptional quality. If the opinion of another leading South African historian, Charles van Onselen – ‘The hearse of history is not far from the playground, and the subject is already half dead’ – is true, it will be the work of thinkers and writers like Nasson that could revive it.

What impresses the reader of this cleverly entitled collection with the striking dust jacket is his courage. That may sound a little overheated for the work of an academic historian, but it takes nerve to swim against the tide and produce the unorthodox. Much history writing about South Africa is either stupifyingly boring and unimaginative, or jargon-laden and weighed down by theory. Look at journal articles: often the most interesting feature is the title. Beyond that lie paragraphs of tedium. But, in contrast, as Tim Couzens writes, ‘this book is a delight’ (p. ix).

Its writing is the antithesis of the post-[supply your own adjective] world. Indeed, he openly calls for a greater sense of joie de vivre – in this case he was referring in particular to the writing of sport history. Nor is he afraid to introduce a judicious amount of self into his offerings. And, admirably, he frequently inserts a measure of literary background and knowledge to expand on historical opinion. It all adds up to the truth that truly good history needs to be both eclectic and creative.

Nasson is also unorthodox in his choice of subject. This collection contains three biographical contributions that would escape the attention of most South African historians or be regarded as untouchable. First, is the significance of the pro-British coloured community leader, Abraham Esau, from Calvinia murdered by the Boers in the South African War of 1899–1902. Second, is Deneys Reitz, author of Commando and, like his commander J.C. Smuts, a Boer officer who assimilated himself into the British imperial order. And third, there is A.G. (Adolph Gysbert, or Sailor) Malan of the famously Afrikaner nationalist family of the Western Cape, one of the RAF’s most successful fighter pilots in World War II, who extended his fervent anti-Nazism into post-war liberalism back home by playing a leading role in the Torch Commando. None of these characters fits easily into the standard narrative of South African history and Nasson lucidly explains why.

There is certainly something of the eccentric about him. For some years he wrote a satirical column for the late and much-lamented Southern African Review of Books under the pseudonym Maki Saki (a play on the Afrikaans for ‘it doesn’t matter’). As an advisor to an American film company on nineteenth-century British parliamentary politics he ended up acting the role of Speaker. And he has also produced text for wine bottle labels. A truly virtuoso performance the introduction puts into the context of his secondary education at Livingstone High, a hotbed of Unity Movement uncompromising non-racialism.

There are three sections of reviews in History Matters: ‘Books’, ‘More Books’ and (unsurprisingly) ‘Even More Books’. Nasson is perhaps at his best as a reviewer as he uses the opportunity to produce well-rounded, thoughtful essays with generous and creative judgements. Most of the more substantial contributions in this book are about social history, most notably of District Six, and the history of war (as opposed to military history). There are also significant obituaries of Ben Kies and R.C. Dudley.

The author’s finale is a selection of favourite quotations, among them Antonio Gramsci’s ‘History teaches, but it has no pupils’. Sadly this all too true, judging by the current state of the world and of South Africa. If only it were otherwise, but surely not for a lack of effort on the part of historians like Bill Nasson.