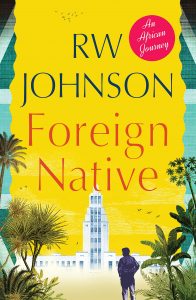 LIBERAL social democrat is Bill Johnson’s self-description; and in this world of rampant and rabid populist nationalism his thinking should be highly prized. He points out, for instance, that while sympathy with the downtrodden is imperative, it is important not to compromise over what is done with inherited power. Nor can there be any argument with his belief in personal liberty and he emphasises that nationalism and communism alike require subservience of the individual. Another of his liberal beliefs is well worth remembering: there is no such thing as collective guilt; only judgement of individual action.

He quotes Thomas Hodgkin, his tutor at Oxford, who remarked that the point of a life was to ‘observe history’. Johnson chooses to follow the example of Richard Cobb, and the method of Charles van Onselen, by reflecting on lives that epitomised their times. This is verified by the index, which consists entirely of names. Many of the characters he highlights were his ‘companions en route’ and he emphasises that Foreign Native is no autobiography. Technically he is correct, but there is a great deal about Johnson in this book. For that it is none the worse.

It starts with schooldays and university in Durban in the 1950s and early 60s, and the febrile time of Sharpeville. He was close to well-known left-wingers such as Rowley Arenstein, Barry Higgs and Ronnie Kasrils; and thus to Umkhonto we Sizwe and the African Resistance Movement. Arenstein is a neglected figure who adopted independent left-wing views of great significance: that the Nationalists were not Nazis, but reactionary racists wedded to parliamentary process that left room for creative opposition; and that the armed struggle, basically an attempt to outflank the PAC, was fruitless and played into the government’s hands. He also argued that Albert Luthuli was removed from the leadership of the ANC in a putsch. It is this sort of unorthodox thinking that characterises Johnson’s writing today.

After an apparently disastrous interview (in Pietermaritzburg), he won a Rhodes scholarship and left South Africa for Oxford in 1964 a couple of days ahead of detention by the police security branch. He was to return only in 1978. His belief in free speech and individual conscience was never going to mesh with the Stalinists of the ANC in exile such as Essop Pahad, whom Johnson also accuses of racism. He makes the barbed but perceptive comment that revolutionary fervour is often simply a cover for personal ambition. He also questions how the ANC was able to orchestrate a liberation struggle from British soil and suggests a deal with MI5. This would indeed explain how the ANC was successfully upstaged by Peter Hain in promoting the sports boycott.

Johnson is not afraid of controversy and freely dishes out his candid opinion of individuals and their flaws. His verdict on Thabo Mbeki is excoriating. Mbeki’s bizarre views on HIV/AIDS and his support for the murderous dictator Robert Mugabe are often explained as a consequence of Africanism. But Johnson goes a step further, arguing that Mbeki was a paranoid egotist of limited intellectual ability. André Brink also emerges poorly: ‘greatly taken with the idea of being a brave dissident while not actually being willing to pay the price.’ We need this historical honesty. Some of his views are more speculative, such as the suggestion that the Durban political scientist Ian Phillips was a police spy. This is presumably based on the fact that Phillips, a one-time right-winger, was an open communist and operated freely; but the system did not necessarily provide all its informers with the cover of detention.

Walter Felgate, another significant but neglected character, is subjected to critical comment as a possible provocateur. Fatima Meer is depicted as an ‘angry, brooding presence’; Anthony Sampson a hireling of the ANC; Frederik van Zyl Slabbert as led astray by the ANC and wrong to abandon the white parliament. Johnson’s great friend, Rob Amato, a fantasist of note, he rather strangely sees as a metaphor for white South Africa. Later in his life he encountered Tom Sharpe, another singular character of the type Johnson seems drawn to.

Johnson’s research took him to Guinea, an example of African Stalinism and under Sékou Touré one of the continent’s most inhospitable countries for fieldwork. He was later to display similar courage reporting from Mugabe’s Zimbabwe flying into Victoria Falls airport, which had no computer link, and somewhat improbably posing as a big game hunter (without a gun).

He argues that South African politics is infinitely complex with messages differing according to the target audience. Public debate is minimal and dominated by symbolism. Similarly, history is devalued by mythology and wishful thinking that translates into perceived wisdom. Johnson uses the example of the Rivonia Trial and presents a compelling case not only that the outcome was a political rather than a judicial decision (Quartus de Wet made some strange rulings), but heavily influenced by Britain and the United States.

The transformation to democracy, Johnson argues, was accompanied by widespread hypocrisy. Optimism was mandatory and even the bravery of the independent-minded evaporated, often through exhaustion and the knowledge that international solidarity had disappeared as the world in its ignorant myopia declared South Africa a problem solved.

Some of his views, however, defy historical reason. He treats Mangosuthu Buthelezi and Inkatha with kid gloves and swallows the right-wing line that the conflict in Natal in the 1980s was primarily stoked by the ANC’s doctrine of total war. This ignores evidence that the devastating Natal civil war was sparked by Inkatha’s desperate need for membership numbers and territory to maintain a national political profile. This was promoted through coercive, often violent recruitment drives by warlords within a patriarchal traditional system that was aided and abetted via acts of omission and commission by the State. There is a considerable weight of evidence to show that the behaviour of the ANC’s allies was reactive, although ultimately aggressive, too. The irony of Johnson’s approach to Natal’s violence is that he argues that power in South Africa is highly territorial (p. 181). Inkatha’s historic behaviour proves this, but is ignored in Johnson’s analysis of Natal.

He also promotes the popular myth that the United Democratic Front was a surrogate for the ANC. This is certainly untrue of its early days when the UDF was too anarchic to be a front for any other organisation, particularly one so influenced by Stalinism.

Past students and staff of the University of Natal will identify with Johnson’s lament about the demise of a strong educational institution. It was a slow process marked by a number of key developments, one of which involved the conversion of student residences into ANC strongholds. The Knowledge Mdlalose affair was another case in point. In spite of persistent academic failure, Mdlalose demanded a continued right to a room in residence and the university principal at the time saw himself as a negotiator rather than guardian of institutional rules and ethics. It subsequently emerged that the Mdlalose affair was about racketeering, and the activities of political entrepreneurs and police spies. The implication is that the university was grossly naïve about the sinister context in which it was operating. Johnson played a part in the university’s takeover of the Campbell Collections, but leaves open a question about how well they have been looked after. As he points out the university has long inhabited a world of fantasy proclaiming its excellence while presiding over declining standards.

Johnson belongs to one of society’s most important groups: academics who are also accomplished journalists. He is widely respected even by those who do not necessarily entirely sympathise with his political angle because he is more often than not correct. The quintessential antidote to post-modernism, he marshalls facts, rationality and logic to argue his case. As he puts it, ‘life is too short not to tell the truth’ and his has been an important voice countering the narrative of past and present controlled by the ANC. Quoting J.M. Keynes, he notes that as facts change so must ideas.

Other readers may well feel that this book leaves one particularly powerful lingering impression: that many of us come from places, institutions and attitudinal backgrounds that either no longer exist or are now profoundly marginalised.