Amin CAJEE as told to Terry Bell, Fordsburg Fighter: The Journey of an MK Volunteer (Face2Face, 2016). 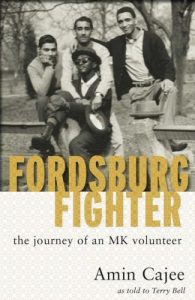 ANC Youth League president Collen Maine recently called on Umkhonto we Sizwe (MK) veterans to defend the nation’s president Jacob Zuma as he stumbles through the state capture crisis. It was all too reminiscent of Julius Malema’s call of a few years ago to ‘kill for Zuma’ and true to form Maine quickly denied any intention to incite violence. Perhaps he has an unintentional point given on-going revelations about the history of MK.

One of the latest exposés is from Amin Cajee who was finally persuaded by Terry Bell to record his story. According to Cajee it is for his grandchildren, but personal accounts like this add depth to our understanding of the past. Born in 1942, he grew up in straitened circumstances, joined up to non-racial, anti-apartheid youth politics in the early 1960s involving minor acts of defiance and sabotage, and was recruited for MK by Paul Joseph who despatched him and Omar Moosa (Bhamjee) to Tanzania in November 1962.

They were very likely the first Indian MK recruits and were treated with casual indifference. Part of this was sheer incompetence, but another factor was race: the Africanist element within the ANC/MK felt no responsibility for, and even hostility towards, Indian volunteers. Endless waiting and travel under considerable tension (Cajee suffered terrible motion sickness) led them via Sudan, Libya and Belgium to London where they waited for weeks before being sent to Czechoslovakia. Here, like cadres trained in China, they were instructed in guerrilla warfare, Cajee becoming a specialist in explosive devices. After another travel odyssey, during which they were returned by the British to Czechoslovakia, they arrived in Tanzania via Cairo and ended up at Kongwa camp.

Their training had been hard earned, a reflection of deep commitment to the cause of liberation. But at Kongwa, Cajee writes, ‘the strength and unity of the comrades, which superseded all trivialities such as tribalism, regionalism, racism and ethnic groupings was broken down and systematically destroyed. The blind loyalty demanded by an unaccountable leadership … broke up a united front of mainly dedicated fighters. The jockeying for power at leadership level encouraged an undercurrent of tribalism and ethnic rivalry’ (p. 119).

Among those in charge were the illiterate, criminally inclined and corrupt Joe Modise (who once ordered Cajee to shine his shoes), Archie Sibeko and Mzwai Piliso. Living conditions were poor and included donated Soviet food dating from World War II while Cajee himself uncovered fraud involving supplies. Possibly this was why materials he used to demonstrate explosive devices were tampered with in a way that would have been fatal had it not been for a comradely warning. Alcoholism, mutiny and absconding were rife, the last two severely punished. Wisely, the Tanzanians withheld weaponry. Those in charge of MK and the camp spoke with the sole authority of the ‘people of South Africa’ and when challenged reacted brutally.

The main source of dissatisfaction was uncertainty about a return to South Africa and the circumstances under which this would be achieved. Many of the soldiers, trained by the Soviets, misguidedly believed this would involve conventional warfare including tanks and a frontline. Regular visits by MK commanders and ANC president Oliver Tambo reassured the troops that a move south was imminent. Morale would rise for a while before disillusionment and unruly behaviour set in again and harsh punishment was handed out. In 1966 Cajee was briefly under a death sentence for treason, a verdict handed down by Modise. The fabricated charge was based on a supposed meeting held in cahoots with the Chinese to overthrow the MK leadership and seems to have been related to the Cold War Sino-Soviet split. Out of this shambles even heroes of the liberation struggle, such as Tambo and Chris Hani, emerge poorly. Cajee’s book is the first clearly documented record of this episode.

The Organisation of African Unity made its displeasure known, pointing out that the South Africans were lagging badly behind the liberation movements of Angola, Mozambique and Rhodesia. Cajee suggests that this prompted the ill-fated incursions into Rhodesia of 1967‒1968. The theory was that alongside ZAPU/ZIPRA, MK detachments would fight their way into South Africa. The Wankie and Sipolilo engagements scuppered this plan, which was fatally flawed. The reason for this Cajee suggests (as have others) was that Modise and the MK commanders deliberately under-equipped the participants and filled the ranks with dissidents. One of their number was Hani who survived by reaching Botswana. Many others, some unknown to this day, perished.

Rumours of what was predicted to be an ill-fated venture (‘romantic nonsense’ in Terry Bell’s words and ‘heroic failure’ in Tambo’s, p. 178) prompted Cajee, Omar and three other MK soldiers to desert (Cajee was already in Dar es Salaam). With good planning, the help of friends and a dose of luck they reached Nairobi and flew to London. In the case of Cajee, political asylum in Britain took considerable persistence while he was based in Belgium and was awarded just before the fall of the Labour government. He married, had a family and pursued a career in local government in London.

Cajee questions whether ‘we … ever really had an armed struggle’ and correctly credits the Soweto schoolchildren of 1976 with the beginnings of meaningful but ‘spontaneous’ uprising. As he points out, they were not equipped or trained for this and paid a high price. As for MK, ‘comrades perished unnecessarily as a result of a dubious military strategy’ (all quotations in this paragraph from p. 174) and later in the Angola mutiny of 1984.

Comments in his book suggest Cajee is concerned he might be labelled a deserter. No rational reader would judge him as such, although rationality is not in vogue in South Africa at present. Dedicated and intelligent freedom fighters would logically walk away from the abuse, criminality, corruption and political authoritarianism that clearly dogged MK from the start; not to mention unscrupulous behaviour based on personal ambition fuelled by tribalism and factionalism. It was, as Cajee maintains, ‘a movement … relentless in exercising power and riddled with corruption … I chose to exit’ (p. 175).

Sadly, these issues speak very clearly to our times ‒ with the threat of violence never far from the surface.