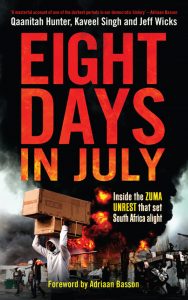 ON Monday and Tuesday 12 and 13 July this year our neighbourhood on the outskirts of Pietermaritzburg was full of smoke from burning commercial buildings. Intermittent gunshots were clearly audible. Just four months later there is a book about it.

In his foreword, Adriaan Basson trots out the old adage that journalism is the first draft of history; so, this book should perhaps be judged by that yardstick, especially since universities have long since abandoned a socio-political monitoring role. Qaanitah Hunter and her colleagues have wisely avoided a comprehensive recap and used their material to analyse events, map out a bigger picture, and punctuate it with vivid eyewitness accounts; a powerful brew. Stories from the frontline highlight the fact that for a week a significant part of South Africa (not the whole as the sub-title suggests) was a war zone with security forces under attack from live ammunition in broad daylight. Anarchy reigned and KwaZulu-Natal, except by air, was effectively cut off from the rest of the country.

An ‘organised and instigated’ insurrection: such is the overall conclusion of this book. Those responsible used the pretext of Jacob Zuma’s imprisonment and weaponised the frustrations of the hungry and hopeless to commit a massive act of economic sabotage that cost R50 billion and 150 000 jobs. One extraordinary statistic is that 1,227 ATMs were robbed of R120 million in cash. Many were blown up, but some were stolen and 36 machines remain missing.

This was the logical endgame of nine years of unaccountability and the hollowing out of the state under the Zuma administration. Its cost can be measured in several ways, but the most serious is loss of respect for the rule of law (these authors speak of it being kneecapped). Former public protector Thuli Madonsela is cited as criticising transactional leaders attempting to intimidate the judiciary.

Zuma denounced a ‘judicial dictatorship’. He wallowed in narcissistic victimhood and conspiracy theory, and wrote his own ticket to jail. Praise singers like Mzwanele Manyi stoked the fire by labelling the inevitable consequences of his provocation an ‘apartheid-style detention’, political imprisonment and an attack on the Zulu nation. Circling predatory, violent, nationalist and xenophobic elements took their cue. Social media mobilised an ‘army of Zuma loud hailers’.

The insurrection is depicted at a number of levels. One was the cry of the impoverished ‒ old women in search of essentials; another the greed of materialists looking for loot in the fashion of Zuma and his cronies. But the most dangerous was the political, a toxic mix of criminality, economic ambition and tribalism, whose aim was chaos.

It was no coincidence that the first major target was 30 trucks at the Mooi River toll plaza. Key points delivering essential services were largely protected, although sometimes temporarily disabled. The most ambitious targets seem to have been the Vaal Dam, the Constitutional Court and the Johannesburg Stock Exchange. Attempted breakouts at Umzinto and Westville prisons were thwarted. The Durban oil refinery closed, citing force majeure, an indicator of civil war; the sugar industry was also under hostile pressure; as was the Toyota plant at Prospecton. Most disturbing was the looting of ammunition delivered at Durban harbour and the authors record that most of the 1.5 million rounds have not been recovered except after use.

Kaveel Singh observed the basic unrest modus operandi in Durban. On a co-ordinated basis, roads near malls and warehouses would be blocked by gangs with burning material and makeshift barricades, the inhabitants of local informal settlements incited to loot, and then buildings torched to maximise damage. This happened with enough speed to overwhelm the police. In central Johannesburg Jeff Wicks described a new level of unrest he saw as ‘aggravated looting’. Journalists were in danger everywhere as were emergency vehicles.

Evidence in this book shows that joint civilian, military and police intelligence reports warned as early as 11 May of such an attempt to undermine the authority and sovereignty of the state. The vacuum appears not to be information, but consequential action from police and politicians and for several days both were missing. Police crime intelligence complained that budget constraints limited the effectiveness of their informer networks. Protests took place around Nkandla defying numerous regulations, yet the police did nothing; fearing, they said, another Marikana massacre, a totally misleading analogy.

For at least four days it appeared that South Africa was sliding into anarchy with ANC leaders and the security forces paralysed by factionalism and posturing around the divisive figure of Zuma. The consequences were national, but much of the country was a spectator at an ANC civil war. In these circumstances neighbourhoods took responsibility for their own security and safety. Some initiatives were law-abiding and represented community solidarity and self-help. Others, far more sinister and akin to militias emerged as feared by the intelligence agencies. The Boerelegioen issued a call to war in defence of a cultural legacy and the Suidlanders and AWB were also in evidence. Cars were stopped at illegal roadblocks and black occupants treated as suspected looters, often with fatal consequences.

Events at Phoenix are dealt with in detail and treated by the authors as a massacre, although many observers regard it as general communal violence. One tenth of the 340 deaths occurred in Phoenix, a place with a particular and abiding apartheid geography and history, and there has been much attention focused on this. In a sense it is symbolic of the eight days in July and the abusive power of social media.

Not much is known about the others who died. Stampedes are often blamed. While there may be some truth in this as liquor stores were popular targets, this assumption may be hiding uncomfortable truths. It was only the deployment of the military that signalled the beginning of the end of the unrest. While a necessary move, it was risky given that they might have had to return fire and kill civilians.

Forty-three people were arrested in Phoenix, but very few of the louder social media stirrers. There has been no sign of the prosecution of others for incitement. Nor has anything emerged about instigators from within the ANC itself; unsurprisingly so because their naming would split the party.

This book is a very early draft of history. It has been put together intelligently, although with the haste that induces errors: reactionary is not a synonym for reactive, for instance. And there are massive gaps. Durban and Johannesburg are the main foci and nothing is said about the small towns of KwaZulu-Natal that were virtually destroyed from a commercial point of view and will perhaps never recover. Nonetheless, it highlights the fact that we owe a considerable debt to high-quality journalism as it records and dissects the state of the nation.

Hitler, Verwoerd, Mandela and Me: A Memoir of Sorts

Academic Freedom in a Democratic South Africa: Essays and Interviews on Higher Education and the Humanities