Confronting the Corrupt: Accountability Now’s Battle Against Graft in SA 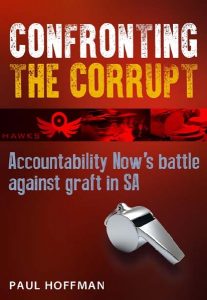 CADRE deployment is the key to the epidemic of corruption that has systematically eaten away at the fabric of the South African nation for the last twenty years. It is a Leninist practice based on the premise that ruling party and State should mirror one another; and it results in the subversion of public service by political appointees. Primary competence is blind loyalty to party masquerading as State. This opens up vast opportunity for plunder as the norms of good governance and probity are thrown in the dustbin. Ultimately, this ideology will destroy South Africa.

According to the Institute of Auditors, R700 billion (a contested figure that could be much higher) was lost to corrupt practice in the twenty years to 2015. Each year the Auditor-General issues a despairingly long list of departments and official bodies that have failed to obtain a clean audit. There is zero prospect of improvement while the ANC remains in power.

It is in this desperate context that advocate Paul Hoffman set up the non-governmental organisation Accountability Now. His is a heroic mission: the vanguard, quite literally, of the second liberation movement – this one against racketeering, state capture and the Gupta/Zuma dynastic alliance that could ruin South Africa and trash the first struggle against colonialism and apartheid, those twin and complementary enemies of South African civil rights.

Hoffman addresses the arms deal and the Seriti Commission, the whitewash par excellence of all South African commissions of inquiry including those of the apartheid era; the battle to save the Scorpions, South Africa’s only effective corruption-fighting agency abolished because it ventured too close to treasonous ANC corruption; the bread cartel; the unbelievable scandal of four successive incompetent national police commissioners; and, to put the icing on the cake, Nkandla … hee, hee, hee as President Jacob Zuma would have it.

Sadly, lawyers find it difficult to write for a general public, that most important of readership groups. Hoffman does not lack the writer’s touch: ‘The law is as unpredictable as the weather in Port Elizabeth, and just as windy’ (p. 118) is a real gem. His view of policing – ‘dropping in cadres through the ceiling of such a complex organisation invariably has unintended consequences’ (p. 193) is absolutely spot on. And his description of ‘Glen Agliotti [as] a Johannesburg businessman of the less than conventional kind’ (p. 193) is a masterful example of understatement.

But outside such insights Hoffman goes into tedious detail about the technicalities of the legal proceedings engaged by Accountability Now. This is not to suggest these are unimportant: the law needs its procedural rules. But it does reinforce the perception that the legal system regards procedure as more important than basic and generally accepted principles of justice.

What does emerge starkly from this book is the apparent irrationality of much of what happens in public life. It lacks rationale, however, only within the context of good governance and civic probity. Outside that it makes perfect sense: the enrichment in a multitude of ways of a new, self-regulating elite. Other words that pop up frequently are malfeasance and misfeasance, which also define large swathes of political activity.

Hoffman is open and honest about instances where lawyers got it wrong. The most notable example is that of Cape Town retailers led by Imraahn Mukaddam in the fight against the bread cartel, who against legal advice went all the way to the Constitutional Court – and won. Hoffman generously notes the ‘moving documentary film with the fitting title Crumbs’ that records the struggle against the cartel (p. 191).

But the reader is left with an uncomfortable feeling of opportunity missed. The sub-title of this book is perfectly explicit: it is an organisational account of Accountability Now. But much more could have been said about the toxic effects of corruption on democracy and the importance of whistleblowing. And the errors in the index, a simple listing of names possibly computer-generated, suggest a book rushed through to publication that might have benefited from more thought and made a greater contribution to debate and understanding.