As by Fire: The End of the South African University

Jonathan Jansen, As by Fire: The End of the South African University (Cape Town: Tafelberg, 2017) 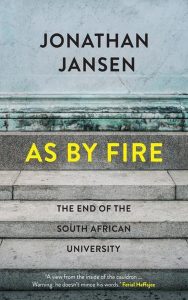 UNIVERSITIES are fragile institutions. They require calm and as little change and disruption as possible to enable their primary purpose of teaching, learning and research. Such are the basic conditions for reflection and rational discourse. Even the most revolutionary of new theories and discoveries needs what is essentially a conservative environment in the best sense of the term.

In 2005 Jonathan Jansen delivered the 40th Hoernlé Lecture. His title posed a profound question that required some courage in the asking: ‘When does a university cease to exist?’ He concluded it was when it fails to fulfil its historic academic purpose. Twelve years on, there is a definitive answer in the sub-title of his latest book based on experience at University of the Free State and interviews with eleven other vice-chancellors, many of them anti-apartheid activists from the 1980s. He writes with forthrightness and honesty, with an admirable balance of empathy and criticism, and in a way that is powerful and at times highly charged.

Jansen’s core reasons for the rapid descent of South African universities are chronic state underfunding (his description of libraries as ‘tired warehouses’ illuminates the point); government meddling (for example, illegal ministerial and presidential pronouncements on limitations on fee increases or even no fees at all); and perpetual instability. Taking the last first, recent rounds of protest started in 2015 as a broadly supported campaign against both colonial symbols on campuses and fee increases. Even so, demands for the removal of the Rhodes statue at University of Cape Town failed to engage in any meaningful way with the best educational approach to representations of past oppression. In a foretaste of what was to come sloganeering was preferred to intellectual rigour. Any pretensions to an idealistic, grassroots student front with considerable public support based on the international Occupy movement soon fell prey to political thugs, many from outside campuses, and even a few loud and embittered academics with career axes to grind. The demands rapidly escalated to free higher education, decolonisation and the insourcing of all unskilled labour.

During 2016 university campuses experienced sheer anarchy including arson, intimidation and violence directed at persons and property. This was explained by some officials as the work of a third force, but dismissed by Jansen as a lazy way of covering up the truth. One notable tragedy was the torching of the Law Library on the Durban campus of University of KwaZulu-Natal. This was the deliberate strategy of rolling crisis. The considered and deliberative approaches of university vice-chancellors and academic administrators held few answers. One recalls negotiations with students that lasted into the early hours. Returning the next morning expecting to sign an agreement he was confronted by a completely different group. The overnight negotiators supposedly had no mandate and the university was now faced by new demands. This was no accident: an apparently leaderless movement with a constantly shifting agenda is part of a strategy of destabilisation.

A demand for transformation gave way to the equally vague term decolonisation. At its most extreme this involved destruction of buildings and denial of a voice to white people. But a consistent theme was nativism or racial essentialism that assumed Africans were the only authentic citizens of South Africa. Derrick Swartz of Nelson Mandela Metropolitan University points out that the social contract underpinned by the rule of law, largely respected by all university constituencies before 2015, was binned. It was replaced, in Jansen’s words, by a ‘season of unreason’ with dramatic disruptive performance (singing, dancing, shouting, sloganeering and even destruction) that shuts down any meaningful dialogue. Chaos is both medium and message; a lesson taught by parliamentary behaviour and the conduct of many ANC meetings. In the more remote universities in rural areas there is evidence that some disruption can be related to tenderpreneurs linked to students shielding looting of what is a significant local resource.

Once more the curriculum came in for criticism. At its most bizarre this involved opposition to ‘Western’ science with the complaint that it could not explain how Africans are able to direct lightning to strike at specified targets. Jansen delves into the sense and non-sense of curriculum decolonisation at length, arguing that every recent decade has seen real progress. Significant change predated the end of apartheid, not surprisingly since the main proponents of teaching reform have long worked in universities. Time, as Jansen puts it, did not stand still for a new generation of angry students to discover decolonisation. Furthermore, ‘insistence on a hierarchy of the powerful North and the powerless South not only plays into … educational victimhood and emotional dependency, but denies the power and authority of South African intellectuals’.

Jansen raises the question why a majority in a democracy should behave like a persecuted minority and suggests inappropriate influence from Afro-Americans. Njabulo Ndebele argues that victimhood is an easy route for the intellectually idle or challenged; and Achille Mbembe points out that narcissism is the fashion of the age. Steve Biko must be turning in his grave. The populist idea that South African universities are by their very nature symbolic of past violence is nonsensical until it is realised that their essential vulnerability sets them up for destructive attack as surrogates of systemic national political and educational failure.

Charles van Onselen some years ago pointed out that universities had become an integral part of the national welfare system. Students, not all of them from very poor backgrounds, claim a right not just to free higher education, but one free of living expenses with the added bonus of diverting funds back home. Yet the proportion of university budgets funded by the State has declined inexorably while government has played to a populist gallery interfering with the fee-paying system while expecting universities to teach, and act as welfare agency to, grossly underprepared students from a collapsing primary and secondary school system.

Added to financial and learning frustrations is a sense among many students that their university qualification will lead them nowhere economically or socially. In an expressive turn of phrase Jansen describes the poorer universities serving up a ‘microwaved version of Bantu Education’. The nature of South Africa’s economy suggests that technical qualifications backed by entrepreneurial skills would be a surer route to success. One of the vice-chancellors interviewed for this book advocates a greater role for good vocational training colleges.

A significant issue exposed by Jansen’s book is that social media is profoundly and destructively anti-academic, akin to ‘virtual vigilantism’ and a channel for a ‘political economy of lies’. Not only did it deliver up a menu of untruth and distorted news, the very antithesis of intellectual endeavour that occluded real debate, but ‘lewd, crude and personal’ attacks on the majority of staff and students who wished to exercise a constitutional right to proceed with their lawful work. He also has justifiably harsh words for the mainstream media, which lazily tapped into social media highlighting the latest dramatic turn of events without bothering with any real analysis of a complex situation. Universities and vice-chancellors were demonised; so much so that the story one of the latter who with his family had to leave his official residence and effectively go on the run because of threats of violence was largely ignored.

Jansen asks, ‘Who speaks for the universities?’ They have been reduced to an ideal in the custodial hands of the few remaining competent vice-chancellors and administrators. Students see universities not as places of intellectual endeavour but of service delivery designed to dish up passports to life success (failing which they will be subject to disruption, potentially terminal). Staff have long been demoralised by incessant change, unreasonable workloads, managerialism and disciplinarianism that have reduced them to academic serfs. And outsourcing exposed the unskilled workforce to yet lower wages and poorer conditions. Even vice-chancellors on limited contracts have been known for short-termism and the need to achieve quick cosmetic change to bolster their chances of the next career move. There was a time when educators were widely respected in South African society even in apartheid schools, but Jansen dates the decline from as long ago as the student uprising of June 1976.

Jansen’s concluding hope, which flies in the face of his sub-title, is that civil society will reclaim universities. This is forlorn. The endgame is upon us and Sizwe Mabizela (Rhodes University) makes the point that the whole South African educational system needs reconceptualising. Indeed, far from reclamation there is the possibility that wealthier universities like Stellenbosch, Cape Town, Wits and Pretoria might break away from the state system on the grounds that subsidies are so low as to be counterproductive and that government is failing to deliver its part of the educational contract.

As Jansen, reverting to realism, writes, ‘in a nutshell, there is no future’ with universities caught between an uncomfortable rock and a very hard place: the opportunism and short-sightedness of politicians on one hand; and the unrealistic demands of students on the other. Reconstruction will be impossible as the wreckage of other post-colonial African universities bears witness.