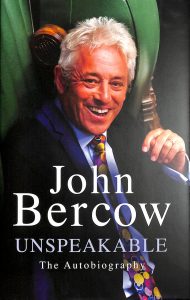 THE FORMER Speaker of the House of Commons is often described as a Marmite figure. By that measure (in a frank declaration of reviewer interest) I lean to the positive, although this would not have been so in the years up to the mid-1990s. Influenced by his father, John Bercow was an admirer of Enoch Powell, a member of the Monday Club, and an inevitable Thatcherite. From the grandson of Jewish immigrants from Romania some of this is hard to credit.

After several attempts Bercow was elected Conservative MP for one of the safest seats in England. Initially his allies and influences were from the right wing of the Conservative Party and he was mildly anti-EU. But he was also independent-minded and voted against his party on a number of key issues that signalled a move to the centre ground of British political life. On the evidence of this book, he is now somewhere to its left and both Labour and the Liberal Democrats tried to recruit him.

It was they who supported his election as Speaker. Most of his own party voted against him and towards the end of his ten-year tenure large swathes of Tories outwardly demonstrably loathed him. He took on the job with the declared purpose of empowering backbenchers to become more than lobby fodder. It is a supreme irony of his career that one of the planks of the Brexit campaign was supposed restoration of parliamentary sovereignty. After the 2016 referendum, the Conservative government did its best on a number of occasions to circumvent that sovereignty, most famously through the proroguing of parliament in 2019. Over ten years Bercow had championed the cause of backbenchers and his crowning achievement was to enable the House to wrest control of business from the government for a short while over the Brexit issue.

Bercow is clearly a man of great energy and enthusiasm who believes in reform, but only if it can promise improvement. The clerks with whom he worked in the Speaker’s office were one of the reactionary obstacles he had to overcome. He has also been faced with bullying charges that by his account appear spurious. He emerges from this book as an authentic conservative now distanced from the radicals pursuing right-wing ideology and running the party to which he long belonged. So estranged is he that he has been denied the peerage usually accorded former speakers. British politics is the poorer.

Much of his book is devoted to candid assessments of politicians he has known. He pulls no punches, but is also generous in praise. He reserves his greatest scorn for the Conservative prime ministers of this century, particularly David Cameron. Yet, somewhat oddly, he votes Theresa May the worst post-war Tory prime minister alongside Anthony Eden. Surely Cameron was worse than either, deliberately risking the very existence of his country to maintain unity in his party and then handing it on a plate to neo-fascist fellow travellers.

Politics is just a game and a matter of entitlement to Eton toffs like Cameron and now Boris Johnson. Bercow’s political morality is clearly of a higher calibre. The British love to denigrate their politicians as a group; gross hypocrisy as they behave in much the same way as the rest of society. As always it should be a matter of individuals. In Bercow the British have a politician of whom to be proud. He will deserve his high ranking in the history of defence of British democracy.