Too White to be Coloured, Too Coloured to be Black: On the Search for Home and Meaning

Ismail Lagardien, Too White to be Coloured, Too Coloured to be Black: On the Search for Home and Meaning (Cape Town: Melinda Ferguson Books, 2022) 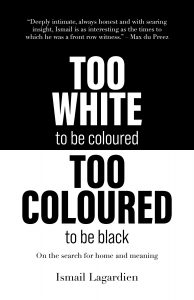 MOST people tempted to write a memoir ask themselves: is my life significant enough for autobiography? Those were indeed the thoughts of Ismail Lagardien, who found the answer: write about your times, places and people and weave in your own experience. It should work for anyone with writing ability and observational and analytic skills. Lagardien the photographer provides the appropriate metaphor ‒ the long lens.

His life is one of twists, turns and mixed fortunes. But in one particular respect it is emblematic of South Africa. Under apartheid he suffered discrimination both as a member of the coloured group; and within that group because with his pale complexion and green eyes he could be taken for white. Under ethno-nationalist ANC rule he has lost out again as coloured and been treated as a settler; even been told to return to Asia. Barney Desai joked that he should walk around with a sign saying ‘I am not white’. A somewhat anarchic arrangement of this book is appropriate to its subject and purpose. But the proofreading errors – see Malaema (169) for instance ‒ are unfortunately not and suggest that too many short cuts are being accepted in the publishing world.

Lagardien’s account is sometimes contradictory. In the 1980s he was a photojournalist but describes that calling as ‘predatory voyeurism’ of poverty and violence: ‘photographs rarely change anything’ (101). On the other hand, he acknowledges the revelatory significance of some pictures. But as he points out we are all a mass of contradictions. Confusion about identity is a constant thread and he writes that he is proud of his Malay background. He emphasises that his community, like most, has historically employed myth and adaptation and warns of the dangers of suggesting uniqueness or special status.

Misfortune has dogged Lagardien in a peripatetic and eclectic life he depicts as driven by fear and bedevilled by race. Born in Fietas, Johannesburg in 1958, his family was forced to move under the Group Areas Act. As a boy he was attacked in the street near his home in Eldorado Park and then beaten by his father ‒ for fighting in the street. His father was uncouth, violent, a womaniser, fond of the bottle; and a devout and strict Muslim. Religious instruction involved memorising tracts of the Quran without any attempt at explanation or need for understanding. It is no surprise to read that he lost his faith and left home in his teens after what seems to have been a miserable childhood. Periodic ill health aside, he was badly injured during a protest at Kleinmond as recently as 2020 that resulted in facial surgery and then an operation to his back for sciatica.

As a journalist in the 1980s he was known as an opstoker describing himself as a saamloper with the Rand Daily Mail, Sunday Express and Weekly Mail. He took the famous picture of the arrest of Firoz Cachalia on the Wits campus, the photograph of Jacqui Quin and Leon Meyer after their murder in Lesotho by Vlakplaas operatives in December 1985, and documented the forced removal at Oukasie and Samora Machel’s plane crash. As he emphasises, the 1980s were an era of sheer unreality. Lagardien had links with the black conscience movement and the white left, but was regarded with suspicion by ANC sympathisers as a possible PAC supporter and led an uncertain existence in Johannesburg newsrooms.

He eventually hit the road with a friend. One of their stopovers was Wuppertal where Lagardien took pictures of local children. His archive subsequently suffered from flood and burglary but these photographs survived and thirty years later he was able to have their subjects identified as adults. A fascinating book seemed in prospect, but it was ambushed by the fire of January 2019.

Lagardien had a stint at the Citizen under the ‘supremely miserable and irascible’ Johnny Johnson and his happiest journalistic passage as a parliamentary reporter and sub-editor at the Sowetan with Aggrey Klaaste. This led to a stint in Mandela’s administration in the mid-1990s after which he left the country, gained a PhD in Economics and worked for the World Bank with Joseph Stiglitz. After his return to South Africa in 2011 his attempts to follow an academic career foundered and ended with an eighteen-month stay at Nelson Mandela University whose termination is barely explained.

Nor is it clear exactly what to make of his time abroad, but it is easy to see why he became a citizen of the world. He is very direct in his observations of South Africa since his return in 2011. In the immediate post-apartheid years moral authority and romantic idealism dominated, but twenty years later Lagardien found a stranger’s country disintegrating amid the politics of revenge and fighting over a dividend that had disappeared. He calls it a fetid mess characterised by ‘mantric repetitions, recitations and incantations of passages from liberation texts’. The evidence is there every day in the media. The National Development Plan he regards as a ray of hope and he acknowledges the presence of people of stature; but in general identifies a ‘seediness’ that encourages the lazy and incompetent through cronyism. He notes in particular an anti-Indian sentiment. In 2015 he walked out of a government position rather than be ‘stuck in a cesspool of incompetence, unprofessionalism, senses of entitlement and luxury German automobiles’ (220).

The ANC he characterises as having a superiority complex. His views on the Truth and Reconciliation Commission are pointed and worth consideration, although it is hard to know why a settling of scores between the ANC and the National Party should be regarded as ‘liberal’ (176). He is correct, however, to question its purpose in the context of subsequent ‘chauvinism, exceptionalism and ethno-nationalism’ (179) where loyalty is the most-prized commodity and a recipe for omnishambles. Far from reconciliation, South Africa is now developing a parallel social economy in which many citizens are withdrawing from a shrinking state.

And so Lagardien’s life continues as it began, framed to a significant extent by appearance; and also by contradiction. Experiences overseas suggest that he might embrace non-racialism, but black consciousness seems to be his preference.