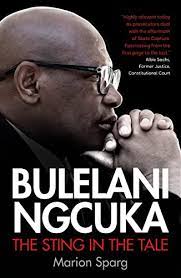 Predictably, this book opens with a question: why if there was a prima facie case of corruption against Jacob Zuma as a result of his connections with the arms deal was there little chance of successful prosecution? That claim was made in 2003 by Bulelani Ngcuka. Nearly twenty years later the case is still moving ponderously through the courts.

Nothing offered in this book contradicts what we suspected at the time. There was no prosecution because Zuma was deemed too powerful to touch. (Ironically, he was eventually jailed, sending himself to prison briefly through sheer provocation.) Corruption charges were later dropped by Mokotedi Mpshe based on the content of the so-called spy tapes. These were illegally acquired and therefore had no standing. And Ngcuka now reveals that the bugged conversation between him and Leonard McCarthy, head of the Scorpions, was in fact by way of a joke. Given the high stakes and the likelihood of political expediency should they not have known better?

Ngcuka’s main achievements were to set up the National Prosecuting Authority (NPA that replaced the former provincial attorneys-general) and the Directorate of Special Operations (DSO or Scorpions). Like much else the first was eviscerated by Zuma, but the second had already been abolished before he became president. The reasons were common to both: making life too uncomfortable for an ANC that was steadily moving from liberation movement to criminal enterprise. The prosecution of senior ANC politicians was regarded as abuse of the system.

Barney Pityana introduces this book, which is based largely on interviews, by explaining that a life of activism is lived in the present while hoping for a better future. This is certainly borne out by Ngcuka’s early years. His rural Transkei background at Middledrift led to study at University of Fort Hare during the turbulent 1970s and then to articles with Griffiths Mxenge in Durban. The aim was to use the legal system to expose apartheid’s iniquities. Detained under section 6 of the Terrorism Act, Ngcuka was sentenced as a recalcitrant witness for refusing to testify against his cousin Patrick Maqubela and altogether spent nearly four years in prison. Mxenge had already been murdered and on the day of Ngcuka’s release in 1985 Victoria Mxenge, who had carried on the legal practice, was also killed.

Although he would be detained again, Ngcuka then began a remarkably eclectic career that started with two years overseas before returning home in 1987. He was involved with the UDF, Mandela Reception Committee, the ANC’s constitutional commission (at University of the Western Cape with Dullah Omar) and then eventually at CODESA. As a committed constitutionalist he makes the point that constitutions protect those who lose power, a possibility for everyone. He describes those as the best of times. Deployed to the House of Assembly as part of the transition, he ended up as chief whip of the Senate. There were clashes with Nelson Mandela over the latter’s tendency to concession that appeared to suit the moment.

As the first head of the NPA, during a challenging six-year stint he had remarkable success balancing political reality with the national interest and the demands of justice. Winnie Madikizela-Mandela, Allan Boesak, Hansie Cronjé and Jacke Selebi all showed up on his watch, together with the Eikenhof Three, PAGAD and Philip Powell and his arms cache (of which, Ngcuka points out, 90% (64 tonnes) remains unrecovered). The Travelgate investigation nailed crooked politicians from across the spectrum.

The Scorpions were a remarkable success story based on the effective combination of the roles of investigator, analyst and prosecutor (not for nothing is Ngcuka’s name the Xhosa for wolf). Trained by the FBI and Scotland Yard, the Scorpions were accused of Hollywood-style behaviour, but the law-abiding public appreciated a satisfyingly high conviction rate. It is tempting to wonder whether state capture and the enormous damage done to the constitutional state and its economy might not have happened had the DSO remained operational. Backing up the Scorpions was the Assets Forfeiture Unit that used criminal and civil law to pursue crooks. Together they achieved almost mystical status, but of course stepped on many toes; most significantly those of comrade criminals.

Successfully doing one’s public duty in South Africa runs the risk of attracting accusations of spying. Disgraced national police commissioner Selebi labelled Ngcuka a British agent. And Zuma in the words of Pityana ‘mastered the act of weaponising rumour, gossip and downright lies.’ The unscrupulous were aided and abetted by a number of grossly dishonest journalists. It was Moe Shaik and Mac Maharaj who spread the lie that Ngcuka was an apartheid-era spy designated RS452. This was in fact Eastern Cape human rights lawyer Vanessa Brereton who worked for security policeman Karl Edwards. Ngcuka was vindicated by the Hefer Commission, which found the dossier compiled about him worthless. Shaik then improbably suggested that Ngcuka was part of a false flag operation (in other words there were in practice two RS452 agents) but subsequently apologised. Maharaj has seemingly never done so and went on to work for Zuma.

Ngcuka emerged with reputation intact while that of his detractors was shredded, although some of these individuals have subsequently flourished. He was brought down by a report from Public Protector Lawrence Mushwana. This argued that the opinion that there was a prima facie case against Zuma had infringed the latter’s rights and impugned his dignity. Ngcuka and Minister of Justice Penuell Maduna publicly stated that this ruling was ‘junk’ and ‘garbage’, but it meant the end of the former’s tenure at the NPA. Resignation was not the end of the matter because there later emerged a dossier of what turned out to be fabricated emails alleging a conspiracy against Zuma.

Ngcuka’s career demonstrates that the ANC will destroy anyone who gets near prosecuting the powerful; the big men who pull the strings of corruption and racketeering. Vusi Pikoli would go the same way and Ngcuka’s wife Phumzile Mlambo Ngcuka reflects on the hatefulness of some so-called comrades. This is a book of hope yet despair that celebrates the integrity and bravery of individuals from across the political spectrum faced with the rottenness that characterises the national condition. Ngcuka, like many other people, has experienced a progression/regression model of liberation: the struggle against oppression; the establishment of democratic institutions; and more recently their demolition. The crucial issue is: where next?