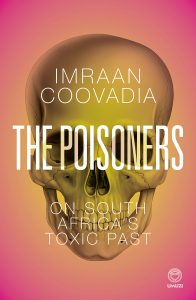 THE USE of poison as a political weapon is characteristic of fragile societies enveloped by suspicion and conspiracy. Imraan Coovadia opens his account deep inside white supremist southern Africa with Rhodesian biochemical warfare, the war crimes of the Selous Scouts, and the involvement of a number of foreigners. The progenitor was a Scot, Robert Symington. Africa was seen as fertile ground for white racists with an interest in guns, poison and other unconventional ways of disposing of ‘those people’. With the end of minority white rule, the action and some of the personnel moved to South Africa where power was gradually slipping from Pretoria’s grasp and the regime’s tactics became increasingly dirty. The main protagonists are familiar figures: Wouter Basson (Dr Death), director of South Africa’s biochemical warfare programme; and Lothar Neethling, head of the police forensic division and ultimately second-in-command of the force; together with operatives such as Eugene de Kock (Prime Evil) and Neil Kriel (the pilot who dumped bodies at sea).

The details are now relatively well documented. The ultimate prize would have been biochemical weaponry that specifically affected black people or an Ecstasy spray to control hostile crowds. The value of Coovadia’s analysis lies in putting these efforts into context. The maintenance of apartheid society was sufficient justification to let loose men of such evil disposition that they should have been locked up. Instead, when justice did come knocking, they were treated with absurd leniency. In Basson’s trial the right-wing judge Willie Hartzenberg might have been his advocate as he deferred to the defendant and connived with the lies that contradicted bail hearing evidence declared inadmissible. The arrogant Neethling, suing Vrye Weekblad for its reports on his murderous concoctions, was likewise treated as if his apartheid-era rank were a matter for admiration.

Coovadia’s account deals with a number of lesser figures attracted by poisoning, such as the Americans Steven Hatfill and Michael Swango (later a convicted serial murderer), who seem to have had no problem finding employment in university departments or hospitals. A plausible manner and sufficient charm seem to have been enough to smooth the way. Basson, ultimately responsible for countless deaths, racketeer and apparent perjurer, not only escaped any form of justice but has continued to practise medicine and remains a minor celebrity invited to present motivational talks.

Like other right-wing authoritarian regimes, apartheid South Africa presented multiple opportunities to misfits and cranks to act out their fantasies. Reading this book raises questions about South Africa’s truth commission; and whether society would not have been better served by specific trials for war crimes and crimes against humanity. There was enough evidence for an unbiased court to convict both Basson and Neethling. Significantly, one of few convictions, that of De Kock, led to the unravelling of some truth, a measure of introspection and ultimate remorse.

After liberation, the narrative shifted. Africanist HIV/AIDS denialists around Thabo Mbeki with their preposterous attacks on mainline science, and medically ignorant suggestions that a virus could not cause a syndrome, upended the apartheid poisoning narrative by claiming that the pharmaceutical industry was trying to poison black people with AZT and Nevirapine. Mbeki authored the peculiar Castro Hlongwane document that accused the science around HIV/AIDS of racism and Nelson Mandela of self-hatred, yet his supporters championed a dubious concoction marketed as Virodene. The Medicines Control Council (MCC) pointed out that Olga and Siegfried Visser’s drug had been through insufficient testing and could not be registered. The government sacked the critics, playing politics with public health, yet a reconstituted MCC also refused registration.

A bizarre alliance of foreigners (Tine van der Maas, Kim Cools and Matthias Rath) and locals (Manto Tshabalala-Msimang, aka Dr Beetroot, and Zeblon Gwala) promoted a variety of treatments ranging from Africa’s Solution, Umlingo, ImmunoCell and uBhejane to simple vegetables ‒ garlic, potato, olive oil, lemon and, of course, beetroot. Tshabalala-Msimang was national minister of health, but had been struck from the medical register in Botswana. The KwaZulu-Natal MEC for health, Peggy Nkonyeni persecuted rural doctors who raised funds for AZT that suppressed mother-to-child transmission. HIV was after all simply a psychological state and the drugs that controlled it designed to poison the black population. And again foreigners were able to act out their fantasies on African soil abetted by locals with dubious agendas. An estimated 320 000 people perished because antiretrovirals were denied. Basson, Neethling and their operatives would have been envious.

The ANC-in-exile was an organisation characterised by high paranoia levels, so it is no surprise to find it the subject of Coovadia’s final chapter. Years of failure, official fear of dissent and the generational change posed by post-1976 recruits framed the Black September incident at Novo Catengue in Angola in 1977, although this may have been a simple case of food poisoning as the alternative explanations are fanciful. Poisoning was one of numerous crimes that framed a culture of increasing brutality enforced by Mbokodo, a creature of the East German Stasi. The apartheid regime stoked the atmosphere of suspicion that consumed and semi-paralysed the movement.

The best-known figure from Mbokodo is Jacob Zuma whose testimony to the Zondo Commission highlighted a culture of intrigue, victimisation, conspiracy, suspicion – and more suggestions of poisoning. Allegations of the last are rife among looters of the radical economic transformation faction and some like David Mabuza and Zuma himself have ended up in hospital in Moscow, where they know a thing or two about poison. The culprits are naturally agents of foreign powers and the ever-threatening white monopoly capital. Some of the allegations may be cover for other activity, although the Americans did think Zuma had been poisoned; whether or not by MaNtuli, one of his wives, remains uncertain.

Given the febrile atmosphere of contemporary South Africa, and Zimbabwe, it seems entirely appropriate that food tasting and suspicions about cooks that belong in the popular imagination to medieval times are part of the current political equation.

This book cries out for an index, but publishers increasingly take short cuts; none more so than Umuzi, which has managed the elementary error of mis-spelling the author’s name on the back cover.