The ongoing saga of Mzala’s ‘Chief with a Double Agenda’ 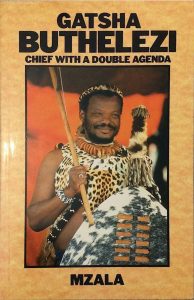 FEW people will recognise the title Inqaba Yabasebenzi. Nor did many back in November 1987 when Inkatha, as the partial price of participation in peace talks in the growing Natal civil war, demanded that the UDF and COSATU repudiate an article published in it the previous month.[i] The journal was produced by the Marxist Workers Tendency, a splinter group expelled from the ANC at its Kabwe conference in 1985. Repudiation was not possible as no one knew anything about it. In any case this was simply a red herring designed to stall talks.

Fast forward 34 years and history seems to be repeating itself. One of the IFP’s requirements for local government coalitions with the ANC is that it should apologise for naming its Zululand region after Jabulani Nxumalo (also known as Mzala, brother or comrade. Nxumalo was a prominent ANC member, one of the movement’s intellectuals, and an MK soldier. He died in London on 22 February 1991 and is famous for his book Gatsha Buthelezi: Chief with a Double Agenda published by Zed Books in 1988.

Zed had treated the manuscript with circumspection. It was read by two teams of lawyers and amended accordingly after which the publishers were confident enough to go for a print run of 12,000. They were wary about the South African market, though, after their local agent David Philip was threatened about distribution of the book. It arrived in this country and was distributed in unorthodox ways, qualifying it as tamizdat (clandestinely imported) literature. Libraries simply used their regular overseas suppliers but according to John Daniel, Africa editor at Zed, the book was carried in the backpacks of infiltrating MK soldiers, adding extra meaning to its eventual reading.

Daniel compared Mzala’s intellectual contribution to that of Anton Lembede, who also died young, and described his book as a ‘richly documented analysis of Zulu history and culture, and a devastating critique of the self-proclaimed anti-apartheid credentials of [Mangosuthu] Buthelezi’. Buthelezi reacted to reviews published in 1988 by threatening legal action and saying that he held the book ‘in contempt’.

In spite of Mzala’s widely known ANC and SACP credentials there is no evidence that the state ever contemplated banning his book. It was well reviewed by respected academics such as Shula Marks, Roger Southall, Norman Etherington and Nicholas Cope in established journals and judged to be based on sound evidence and interpretation. Shaun Johnson in the Weekly Mail described Mzala as a ‘considerable scholar’ and his book ‘a reasoned, informative, well-researched and tightly argued attack on a political opponent’. In general, reviewers agreed that Mzala had dealt comprehensively with the paradoxes and contradictions of Buthelezi’s political position: an anti-apartheid bantustan leader and man of peace leading a party that specialised in warlike rhetoric. However, the author was criticised for failing to give enough credit to Inkatha as a political organisation.

Three months after Mzala’s death, Buthelezi’s lawyers, Friedman & Friedman, sent out a letter to a reported nine university libraries demanding that the book be withdrawn from their shelves on the grounds they were circulating defamatory material.[ii] Active state censorship had ended, but Buthelezi was using the threat of defamation law to the same effect, KwaZulu bantustan style. In an extraordinary response to protest, Inkatha advised complainants to go to court.

Why had Buthelezi waited so long to threaten to act against this book? In 1989, in a letter to Frontline in which he gave his full name and (royal) family connections, Mzala addressed this question by arguing that what he had written was the truth based in part on an interview with Buthelezi in London and on material elicited from Zulu elders. Now he was no longer alive to defend his book.

Jenny Friedman believed that continued circulation of material claimed to be defamatory amounted to publication and was thus actionable. Librarians disagreed on the basis that no court had ruled on the book. The Anti-Censorship Action Group was more forthright comparing Buthelezi to the ‘book burning despots of the past’. Friedman used a well-known excerpt from Othello referring to the ‘value of my good name’ forgetting that it was uttered by Iago, regarded as a sinister villain capable of betrayal while protecting his tarnished reputation.

This hardly assisted her client, but university authorities in the face of opposition from librarians and academics caved in. The details of the legal advice on which they depended was never revealed. Faced by powerful litigants with deep pockets, caution ‒ and censorship ‒ are often the outcome. This was definitely the view of academics at University of Natal, one of whom was using Mzala’s book as recommended coursework reading. The Natal Witness weighed in with a forthright editorial on the importance of academic freedom; while the Inkatha Institute continued a full-frontal attack on named staff at the university and described academics in general as ‘ANC fetch-and-carry boys’. This rhetoric fell flat as the lid was lifted on police links with Inkatha warlords and government funding of Inkatha’s trade union arm.

The best critique of this stand-off was provided by historian Paul Maylam and published in the Daily News. He pointed out that claims about defamatory content were ‘vague and general’ and unsubstantiated and that a genuine democrat would prefer debate to threats of litigation. The latter approach featured Buthelezi as combined ‘complainant, jury and judge’ when as a public figure he should be prepared to defend his position, not suppress opposing viewpoints. There has never been an explanation of precisely what is believed to be defamatory: a word, sentence, paragraph or chapter? The fact that the book offends Buthelezi (or anyone else) does not render it defamatory. This is dependent on untrue content written with malicious intent. For a prominent figure the bar is set relatively high with public interest a factor ‒ as would soon be demonstrated in the 1990s by Lothar Neethling’s failed defamation case.

All these years later Nxumalo’s book is not only in the spotlight but part of political trading. Ironically it is widely available in South African university and public libraries, although booksellers tended to avoid it so effectively consigned it to limbo. For instance, in 1994 Phambili Books in Johannesburg was threatened with legal action and an extraordinary demand for a list of purchasers. The book is now out of print after a failed attempt at republication in 2019. It is curious that the IFP is so concerned about a writer who died 30 years ago and whose book is not easy to access when focus is needed on the governance of collapsing municipalities. But it is indicative of the personality driven nature of South African politics and the neglect of issues that affect the general public.

This article first appeared in the Witness, 16 November 2021.

[i] John Aitchison, Numbering the Dead: The Course and Pattern of Political Violence in the Natal Midlands, 1987‒1989 (Pietermaritzburg: Natal Society Foundation Trust, 2015): 22.