The Fall of the University of Cape Town: Africa’s Leading University in Decline 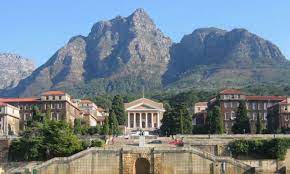 IN his conclusion to this history of the University of Cape Town (UCT) since 2015, David Benatar argues that his university ‘has gone mad’. Many of us who lived through the early years of University of KwaZulu-Natal (UKZN) from 2004 to 2010 felt the same and both experiences led to books, written not in the futile hope of change, but to document and explain the apparently inexplicable.[1] Benatar compares UKZN and UCT and concludes that the former suffered from dictatorial management; the latter from management too weak to deal with student criminality. This is right on the button, but there are striking contextual similarities.

The most obvious is the dominance of identity politics, primarily racial, that has come to replace traditional university culture in which intellectual effort involving truth, logic and reasoned argument are pre-eminent. The result is knee-jerk reaction rather than constructive engagement; slogans, theatrical gestures and demagoguery rather than debate. The destructive force of race-based ideology is enormous. Transformation, sometimes rendered as decolonisation, is a hallowed but conveniently undefined concept that allows delegitimisation of many voices and the unchallenged dominance of others. Thus, a stultifying orthodoxy descends, much of it founded on feelings rather than evidence.

In this context powerful people invoking victimhood, purely on the basis of pigmentation and appearance, weaponise it to justify behaving in non-collegial, authoritarian ways. Particular examples are to be found in the manipulation of agendas. The concept of chairperson as arbiter and referee gives way to the role of dictator. In these circumstances an issue such as adherence to rules can quickly evolve into accusations of race-based disrespect. The idea of institutional support for those in the right regardless of pigmentation is non-existent. Trust evaporates as quickly as ice cream in the midday sun and the collegiality essential to intellectual endeavour goes with it.

The racial imperative is strengthened by the domination of crude demographics based ultimately on apartheid-era classification that ignore the genetic absurdity of race and rely on physiognomy and acceptance. In this atmosphere poor appointments will be made until there are enough of them to create a critical mass. Under these circumstances potential applicants of promise, whatever their background, withdraw. Who wants to hold a poisoned chalice?

Justification follows wild accusation. Authoritarianism and mob behaviour based on identity and orthodoxy result in a climate of fear and self-censorship. It requires relatively few toxic characters to engineer this as they attract opportunistic followers and ideological fellow travellers, and operate in a general climate of complicity. Committed staff withdraw from committees such as Senate and faculty boards, no longer make public pronouncements, keep their heads down, and privatise academic lives by working from home as far as possible. People no longer speak out, but at most commit their thoughts to writing. This fearful climate is exacerbated by threats and suggestions that compulsory behaviour modification (immersion in sensitivity training) and compliance may be introduced. In the meantime, official propaganda pours forth about diversity, but this is hollow and does not include intellectual diversity in any real sense.

A black academic forum or caucus pushes for special recognition and representation or enhanced terms of employment (even though some claim the term black academic is micro-aggressive). With the benefit of anonymity, it puts out inflammatory statements in the name of a racially self-serving collective without declaring its membership. Parallels with the Afrikaner Broederbond spring to mind; and while these forums flourish, academic freedom committees wither or vanish entirely. Senate ceases to be a site of academic debate and decision-making and becomes largely a platform for the vice-chancellor’s orthodox declamations (both UKZN and UCT saw highly controversial appointments at this level of people temperamentally unsuited to custodianship of a university). Public pronouncements and policies are couched in the language of public relations spin doctors and do not match deeds. Universities become propaganda machines.

It beggars belief that all these trends have been identified at two of South Africa’s leading universities, but the evidence is indisputable. In the case of UCT, amid the decline it is possible to find some humour. In its pursuit of race classification Council decided that staff should self-classify; but they were warned not to mis-classify. That this kind of absurdity should emanate from a university indicates just how far reason has been jettisoned. Animal Farm or Alice in Wonderland? Just take your pick.

Part of this book is based on previously published opinion pieces and there is a degree of repetition, but David Benatar provides a useful guide to selective reading. He subjects events he has personally experienced or witnessed to a steady and withering flow of close scrutiny underpinned by the fierce logic of a philosopher. He is not afraid to speak his mind in forthright fashion: ‘a saga of lunacy, criminality, pandering … The mad and the bad – the deranged, deluded and depraved – have been granted endless latitude in bullying and persecuting others.’ But he is quick to see the humour and irony in many situations such as a student turning up late for a disciplinary hearing and demanding to be fed (cornflakes for breakfast and meat and rice for lunch). And he has an engaging turn of phrase, writing about those without ‘an advanced degree in racial paranoia’; and describing an exam question (actually a statement requiring a predetermined response) as ‘self-crippling drivel’.

Legitimate protest by students at UCT in 2015 over the Rhodes statue rapidly degenerated into outright criminality: intimidation, assault, arson and other forms of violence. One target was artwork including, unbelievably, the work of David Goldblatt and Paul Weinberg in scenes reminiscent of Nazi Germany (it took the South African branch of PEN and the national library association several years to acknowledge this egregious censorship). Both university regulations and the law of the land were broken with impunity. UCT not only failed to prosecute in timeous fashion, but it constantly placated law breakers condoning their behaviour, what the author terms ‘negotiated capitulation’. Those who requested application of the law were widely denounced and accused of violence.

An avalanche of vitriol and abuse was handed out to university staff trying to do their jobs within accepted rules, regulations and behaviours. Amid the turmoil the dean of medicine and a well-respected academic, Bongani Mayosi, committed suicide. His family confirmed that a situation in which he was called a coconut and a sell-out was a trigger and that he had enjoyed a perfectly normal relationship with UCT before 2015. An alternative, false narrative that he had suffered as a black member of staff was peddled by protestors. This replicated events after the death of Brian Hahn when his family was virtually ignored and his assailant was celebrated as a victim.

This is a world of anarchy in which words no longer hold meaning. For example, the term progressive was abused to embrace those openly promoting and practising violence. Democracy was a process to be repeated until bullies achieved the result they required (the deanship of the Faculty of Humanities took three years to fill). ‘Being heard’ meant forced to agree.

A number of well-known names appear. Chumani Maxwele, the faeces thrower, for instance, who persecuted and intimidated a female member of staff. He appears twice to have assaulted people at disciplinary hearings. The member of staff, incidentally, was subjected to a disciplinary process based on evidence that was found to be totally fabricated. He also seriously disrupted a meeting of Convocation. Then there was Masixole Mlandu who broadcast the one settler, one bullet threat. A political science lecturer and self-styled comrade (now promoted to commandante) violently disrupted a faculty election without apparent consequence.

But much of the problem lies in less overt behaviour. On one occasion students demanded the cancellation of exams. Entitled students with grievances and mental health problems can flout regulations and then harass lecturers via social media when faced with consequences. This may go on for years with damaging personal and professional outcomes because of race-based victimology assumptions both within and outside the academy. The language used in some of these social media campaigns is totally disgusting and should be subject to punitive action. In tutorials student opinions based on reading and learning are derided by fellow students (class crybullies) insisting that their feelings and personal experience provide definitive and privileged truth. Reasoned debate dies under these circumstances and is replaced by mandatory orthodoxy that defies internationally recognised conventions about the pursuit of knowledge. The same approach demands so-called safe spaces.

It is telling that amid this upheaval UCT’s administration did not elicit opinion via an online survey of all staff and students as happened in comparable circumstances at Wits.[2] There, majority opinion rejected the self-styled revolutionaries, showed that there was less support for disruptive violence than supposed, and provided the authorities with the proven support to try to re-establish order. Nor did UCT use the courts to pursue blatantly criminal behaviour, cravenly evading its right and duty in a democratic state based on the rule of law. On both campuses there was evidence that disruptive students were trying to establish political profiles; and that some lecturers egging them on were foreigners.

More recently, after the departure of vice-chancellor Max Price, UCT has started travelling the UKZN path of managerial interference. A good example is the attack on Nicoli Nattrass over her publication of a survey in South African Journal of Science, an outrageous assault on academic freedom at various levels. Then the vice-chancellor, facing over three dozen complaints of bullying, discredited and undermined the UCT ombud’s report. She admits to keeping a little black book.

Honesty and commitment demand that events such as those witnessed at UCT in recent years be documented and the author has done a splendid job. But the importance of this book goes beyond warnings about the undermining of academic freedom and intellectual culture. It is a timely defence of liberalism now under global attack; literally so in some places. In order to protect and promote it, the true nature of its adversaries needs to be exposed.

Benatar tackles the issue of classifying the illiberal at UCT, many people assuming that they come from the political left-wing. In so far as such labels any longer have meaning, is this correct? In spite of the rhetoric, much of what has transpired at UCT has all the hallmarks of fascism, which is where racial nationalism, and the methods used to cement it, fit most closely. Extreme right-wing movements often use socialist-sounding rhetoric to confuse and confound. And the fact that many supposedly left-wing individuals are fellow travellers should not cloud the issue. That simply confirms the crucial importance of the liberal political centre with its tolerance of a wide variety of civilised views and behaviours.

It is a tragedy that some universities have become echo chambers of national malaise. Where they succumb entirely, they will of course cease to be universities.