The Afrikaners: A Concise History 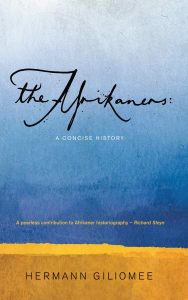 THERE is much to be said for concise books: many modern publications are far too long. This one is the progeny of an 18-hour documentary for kykNet that resulted in a 700-page book; the short version being just a third of its length. Hermann Giliomee is not without his critics, but he sticks to the old-fashioned virtues of the historian: the literate telling of a story into which analysis is woven. He is absolutely correct to argue that the best historians are akin to good novelists in technique, although not of course in method. It boils down to skilful writing and Giliomee admires Simon Schama, Jeremy Paxman and Simon Sebag Montefiore.

This is well-rehearsed history that starts with the Dutch East India Company refreshment station at the Cape for one of the world’s first transnational companies and the struggle between authority and burghers. Early possibilities of an egalitarian society founded on Dutch custom were aborted by slavery. Ultimately, a significant proportion of the population (10%) trekked away from the British colony to become a white tribe of Africa. The abolition of slavery and the issue of the franchise were triggers, but the broader reason was an existential crisis on the eastern Cape frontier. Giliomee accuses the British colonisers of cultural arrogance while admitting they brought improved governance and a free press.

While some Afrikaners were an integral part of Cape liberalism, in the northern interior they fought with African tribes, founded short-lived and unstable states, and in the case of the Potchefstroom Doppers created a self-belief in a chosen people. The South African Republic was for many years essentially a failed state, although the Orange Free State was far more viable. But as Giliomee attests there were two nations of Afrikaners. What was to shape their joint future was the discovery of diamonds, then gold; and the war that resulted from the new strategic importance of southern Africa.

Paradoxically those who prolonged the conflict, the bittereinders, had in many cases been opponents of Paul Kruger’s Transvaal government. Now they were fighting for justice stimulated by religious zeal. But, crucially, there was no significant rebellion by Afrikaners in the Cape. Giliomee reserves a particular venom for Alfred Milner, whom he justifiably regards as a racist arch-imperialist representing the aggressive, jingo face of empire. Milner was to be unsuccessful in his attempts to shape South Africa after the war, architect of his own failure.

Although the origins of the term and concept of apartheid lie in the Dutch Reformed Church, there is surprisingly little in this book about religion. Giliomee’s two main themes in the development of an Afrikaner identity are women and language. The strong position of women derived from the Dutch system of partible inheritance and entrenchment of racial endogamy. Women were some of the most intransigent of bittereinders, later symbolised by the Bloemfontein monument. Indeed, Afrikaner women seem to have been more interested in ethnic nationalism than politics and attained the vote only in 1930. Rina Venter, the first Afrikaner female cabinet minister (1989), had poor regard for her male counterparts.

Ironically for an ethnic group obsessed by apartness and with its language, Afrikaans derived from the patois of black slaves based on both Dutch and other languages. Language equality was a keystone of the 1910 Act of Union. Promotion of Afrikaans, together with mobilisation around commerce and finance and the work of self-help organisations bolstered by celebration of the centenary of the Great Trek, laid the foundations of a remarkable unity, solidarity and commonality that lasted until 1980. So strong was this identity that there were calls for a quota system in the 1950s.

Giliomee is an advocate of the idea that the National Party victory of 1948 was due to South Africa’s failure to adopt neutrality in World War II. This is hard to credit given the nature of Nazism and other brands of fascism. It does suggest, however, that Afrikaners were still fighting the South African War of 1899–1902. And indeed this attitude to the World War might explain what was to follow the watershed election.

Common language did not save the coloured community whose defining boundaries had traditionally been fluid, but now had to be hardened to enforce urban segregation and the loss of the vote. The struggle to remove the coloured franchise inflicted early damage on the Afrikaner project with its strong taste of disrespect for the Constitution and rule of law. The process of race classification provoked many family tragedies and was a similar blot. But Giliomee makes an argument that the system of Bantu education has been misrepresented.

Hendrik Verwoerd maintained in the early 1960s that apartheid was a form of decolonisation and accordingly attracted some international support. But ultimately it was a hollow policy promoted by people unwilling to move with the times and seize the moment; such as the imaginative reform proposals that flowed from the Buthelezi Commission in the 1980s. Four supposedly independent bantustans became sites of looting and an early warning of today’s South Africa. The end game was simply a matter of demographics; enabling Schalk Pienaar to joke that South Africa was ‘God’s reserve’ for Afrikaners.

Afrikaner solidarity started to unravel in the 1970s when the community’s businessmen decided they were capitalists ahead of ethnic leaders. The sheer cost of apartheid was now only too apparent; not the least of which was a moral deficit. An increasing number of influential Afrikaner voices were raised in warning. The Information Scandal and revelations about membership of the Broederbond were further embarrassments. Giliomee adds the blunder of the invasion of Angola (Operation Savannah) in 1975 that had enduring international repercussions; together with the Border War that took an enormous toll on the Afrikaner psyche.

Giliomee’s readable book invites a number of thoughts. One is the fact that the South Africa modelled on Afrikaner notions of separateness was in measure a reaction to British imperialism. Yet both empire and apartheid collapsed relatively quickly and have long since vanished, although the legacies of both endure. Such is the folly and fate of grand visions.
Source: From The Thornveld