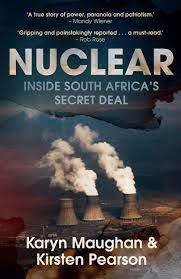 ONE of several wives of the president tries to poison him at the behest of the CIA, but he is saved by doctors in Moscow where he concludes a nuclear power deal with Vladimir Putin worth over a trillion Rand. The plot for a novel? No, this was South Africa in 2014. The poisoning is indeed fictional according to the national prosecuting authority, the source certainly so; but the deal was real enough until overturned by a combination of courageous public servants, civil society and the courts. This is the bizarre, paranoid world of state capture, which remains a highly sinister factor in South Africa’s politics. And the malign legacy of exile lives on.

The Zuma administration was characterised by plunder by the president and his local and foreign accomplices. It was accompanied by increasingly illiberal and anti-Western behaviour that moved South Africa more closely into the orbit of authoritarian powers like Russia and China. Sentimental history from the Cold War and fabricated Western plots were conjured up to bolster and justify this. But the most egregious move was a new inter-governmental agreement about nuclear power (the existing one was typically general in its intent) signed on 9 May 2015 that looked suspiciously like a binding contract with Rosatom. It was more like an act of diplomacy than an energy deal; and, suspiciously, there were two versions.

A 9.6 GW nuclear deal would have been ruinous for a nation with a shrinking economy, involving annual repayments of R100 billion per annum.  The rhetoric surrounding it illustrated the extent to which Zuma’s South Africa was tied to Russia; and antipathetic to the West, having rejected American requests to destroy 220 kilos of enriched uranium in the light of the break-in at Pelindaba in 2007. The Treasury, in the person of Minister of Finance Nhlanhla Nene, refused to endorse such a nuclear power deal arguing that the Department of Energy, by now in Zuma’s pocket, had not only failed over due diligence, but probably massaged the numbers and misrepresented likely outcomes.

Under such circumstances Nene was not prepared to sign an effective loan guarantee. Treasury officials were then predictably tarred as Western agents, apartheid remnants and the tools of white monopoly capitalism. What they were doing was pointing out the absence of thorough research and expert advice, other bids and due procurement process, oversight and accountability; the consequences of which could be diminished resources for education, health and social grants. Treasury was at pains to emphasise that it was not necessarily averse to nuclear power generation, especially a phased project, but that implementation had to follow legal channels. In the parallel South Africa of Jacob Zuma this was regarded as unacceptable. The bare bones of this saga are reminiscent of the infamous arms deal; the strategic purpose very different, but the corruption just as real.

The turning point was a legal challenge by Earthlife and the Southern African Faith Communities Environmental Institute to the legality of the latest inter-governmental agreement. Interestingly, they were assisted by a Russian source. Protagonists of the case were subjected to threats and intimidation, but the judgment from judges Bozalek and Baartman of the Western Cape High Court was worth it, deeming the agreement irrational and illegal. This was not the end of the struggle because Zuma then tried to use Eskom itself and allies like Dudu Myeni, Ben Ngubane and Brian Molefe in a last-ditch attempt to seal the deal. The threat disappeared only with the recall of the president. What might have been – seizure of the Treasury – is yet another South African lucky escape story.

The political gangsters who captured South Africa naturally gravitated towards authoritarian global allies; distancing themselves from those awkward nations that insist on the rule of law, constitutionality and other liberal complications. Ironically, in the process they made themselves accomplices of a new colonialism in which Russia as nuclear plant owner-operator, indemnified from responsibility for possible misfortune, would use South Africa as a possible loss leader but also bridgehead into the rest of the continent. Unsurprisingly, this process involved a great deal of secrecy and conspiratorial activity such as fabrication of intelligence reports totally at odds with the mores of a functioning democracy. Some of the results, like the poisoning saga, were truly bizarre: Maria Ramos portrayed as a Western agent, for instance.

The title of Karyn Maughan and Kirsten Pearson’s book is accurate enough, but the story of energy in South Africa is one of ideological and political power; not the relatively straightforward matter of generating electricity, which has become almost incidental to faction fighting. This account of a thwarted nuclear deal highlights how close South Africa came to financial meltdown and a political coup, an outcome engineered by a populist president whose true calling is racketeer. It shows how the basic needs of South Africans continue to be subordinated to geopolitical allegiance and the ANC’s emotional ties to imperialist Russia at the expense of democratic institutions and processes.

In the light of the Ukraine war, this has become yet more significant.