Not Without a Fight: The Autobiography

Helen ZILLE, Not Without a Fight: The Autobiography (Cape Town: Penguin Random House, 2016) 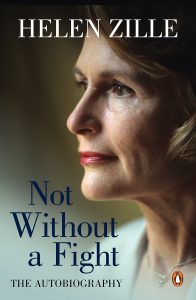 HELEN Zille arrived home one night after a visit to a Cape Town township believing her car had been stoned. However, there was a large bruise at the base of her spine: she had in fact been shot at, the bullet penetrating the driver’s seat but fortunately not her. Someone – her husband claims it was definitely not him – joked that they always knew she had a thick skin, but … Her political career recorded in this book certainly proves it even more decisively than a bullet.

This is a doorstop of a book. But Zille writes with conviction, often with humour, not without self-criticism, and with openness – especially about her youthful anorexia and later depression. In the course of researching this book she delved into her German-Jewish ancestry discovering new information and even unknown relatives. From humble origins and interrupted university studies she progressed to a successful career as a reporter on the Rand Daily Mail and played a significant role in uncovering the murder of Steve Biko. This was followed by a period as a freelancer and Black Sash activist, a prominent figure on its liberal wing.

South Africa’s liberation was the setting for the launch of her political career, initially with the Democratic Party, that tiny survivor of the apartheid-era’s Progs. Having served as mayor of Cape Town, minister of education and premier of the Western Cape, and national leader of the Democratic Alliance she qualifies as one of South Africa’s most experienced and successful politicians.

She is also refreshingly uncompromising – committed to the rule of law, constitutionalism and non-racialism – plus the market economy. The first three are shared by all South African democrats, but such commitment makes life exceedingly challenging as Zille’s story demonstrates. Her fourth belief is more debatable.

Whatever one’s view of Zille there can be no doubt about her determination. Her political career started from activism on a school governing body over the issue of teacher voluntary severance and redeployment and a conviction that post-liberation South Africa would need a strong opposition party. Her subsequent work to build a Democratic Alliance presence in the Western Cape townships took Herculean effort, but was dwarfed by that of local black activists who suffered massive persecution. Most of the discontent with the ANC arose out of housing issues caused by local fiefdoms and strongmen who behaved like mafioso. But Zille’s main scorn is directed at the South African Police Service, which with a few individual exceptions behaved as the ANC’s enforcement agency using all manner of dirty tricks and tactical incompetence.

Crises have been recurrent, two of them made possible by that strange period during which floor-crossing (crosstitution) was permissible in national and provincial parliaments. First, there was the bizarre attempt by a Cape Town gangster, Badih Chaaban, through a variety of political machinations to destroy the Cape Town municipal coalition government in the run up to the 2010 FIFA World Cup in order to protect his property development turf. Zille amusingly reflects that Chaaban would be hard to script into a soap opera as a believable character. The flimsy interface between mafia-type criminality and South African politics is revealed in all its alarming reality in this episode and explains the breadth and depth of corruption that threatens to destroy democracy. Then there were the underhand attempts by former members of the National Party led by Theuns Botha to break up the Democratic Alliance as the price for Zille’s leadership. In the process scurrilous material was circulated about her as ‘an activist in the hated Black Sash’ married to an ‘Anglicised Afrikaner’.

For several years Zille was both DA national leader and Western Cape provincial premier, reliant on a caucus leader in the National Assembly. It was always a tall order and fell apart during the short tenure of Lindiwe Mazibuko. The result was dysfunctionality and DA support for some distinctly questionable legislation around black economic empowerment. Zille’s is of course a one-sided account, but Mazibuko’s case is not enhanced by the fact that under other caucus leaders the system has worked smoothly enough.

Then there was the notorious long-running saga of Mamphela Ramphele of Agang and her fleeting tenure as the DA’s presidential candidate for the 2014 general elections. Zille and Ramphele were old friends and colleagues – they had worked closely at University of Cape Town. Ramphele, who has written much that is valuable about black consciousness and post-apartheid South Africa, emerges from these pages as high-handed, unreliable and vulnerable to dodgy counsel from shady advisors. Sadly, it appears, she is totally unsuited to the discipline required of party politics and the DA had a lucky escape despite the romantic (and valuable) notion of reviving a BC tradition.

The DA emerges from this account as a party more fractious than its general public image might suggest. It is, of course, an alliance and Zille argues in its defence that is generally scrupulously managed. From this account candidate selection is handled with considerable care, attention to detail and fairness.

There are remarkably few obvious errors for a book of this length. The Isle of Man, where Zille’s mother was a World War II child detainee (and became an Anglophile), is not in the English Channel but the Irish Sea. And the idea that the British Liberal Democrats are a sister party to the DA is way off the mark.

This book was published several months before the latest storm around Zille’s use of Twitter, especially her comments about colonialism. She seems oblivious of the toxic nature of tweets and admits to exchanging opinions with highly questionable people who are surely best ignored. It is a strange vulnerability for such a seasoned politician, but maybe a downside of the combativeness that has served her, and the cause of South African democracy, well. Her treatment by the DA was scandalous and calls into question its liberal credentials. And one wonders whether Zille’s standing has declined: this book was published in hardback just a year ago selling for about R350; yet my copy cost only R150, a rate of discounting rarely seen in the publishing industry.

One hopes that once Zille retires from politics she will continue writing. At the end of this book she presents a brilliantly excoriating critique of critical race theory: that toxic pseudo-academic fashion which elevates victimhood to ideology, substitutes feelings for evidence, makes sweeping generalised assumptions about the ‘pathology of whiteness’, and demands special privileges. Its basic demand is to turn personal feelings (pain is the generally preferred term) into an academic commodity in the interests of ‘authentic blacks’. It is the latest form of thought control, censorship and racial dominance in which truth is the likely victim. Zille quotes Achille Mbembe, who describes it as ‘self-indulgent petit bourgeois discourse’; while she, disturbingly, suggests that it might affect attitudes within the DA.