Native Merchants: The Building of the Black Business Class in South Africa 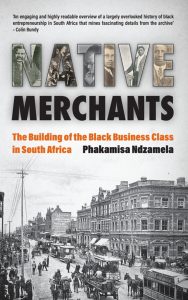 MOST South Africans probably think of black business people as those who have grown rich in the post-apartheid era. But this class has deep historical roots albeit framed by enormous struggles waged against colonial and apartheid discrimination. Phakamisa Ndzamela spends a considerable part of his book explaining this context. And as a journalist, he is not afraid to use reader-friendly language to put across his ideas and present an accessible account of a previously buried topic.

He kicks off (as he might write) by looking at pre-colonial mining and the efforts of black miners on the Kimberley diamond fields. This was a crucial phase with the rise of racial capitalism turning entrepreneurs into labourers. He recounts the attempts of the Barolong, assisted by Sol Plaatje, to hang on to their mineral-rich land in the face of expropriation. Deprived of the right to participate directly in the mining industry, Africans turned to the provision of services as clerks, interpreters, policemen as well as storekeepers. The author also touches on the guild of laundrymen, or Amawasha.

South Africa’s earliest businesspeople were the Khoe of the western Cape who traded with the Portuguese, British and Dutch from the late fifteenth century onwards. Once the Dutch established a permanent settlement, relations deteriorated over poor terms of trade (livestock in exchange for copper and tobacco) and theft of pasturage. Emblematic of this business was the enigmatic Autshumato of the Goringhaikona. War broke out in 1659. With Dutch dominance, a complex business regime developed: some free black traders such as Maria Everts owned slaves or employed whites. Wine farms still famous today were established. Some of these businesspeople were the ancestors of today’s Afrikaner commercial elite, emphasising the complex nature of the black business class of the subtitle.

On the eastern seaboard, African farmers outperformed whites: in the mid nineteenth century black Natal farmers were supplying wheat to Cape Town. But in spite of this, and because of it, they were gradually muscled out of the market by political decisions exacerbated by adverse physical conditions. On the Natal coast, kholwa cane farmers ran a sugar mill. But as Ndzamela pithily observes, ‘wealth did not amount to freedom’ (107). Indeed, success precipitated its loss. The 1913 Natives Land Act stunted business opportunity, destroying the wealth-creating possibilities of share cropping and tenant farming, and again turned potential entrepreneurs into wage labourers.

The service industry continued to provide opportunities. Paul Xiniwe, one of the earliest and most prominent black businessmen, owned the Temperance Hotel in King William’s Town among other interests. Like many other eastern Cape middle-class Africans, he was prominent in sport and cultural organisations. Walter Sisulu ran an estate agency while Elias Moretsele was a restauranteur; and both were prominent in the ANC. A.W.G. Champion also had a hotel and founded the Vuka Afrika general trading company. Other general dealers included Philip Merafe, father of Ellen Kuzwayo, and Richard Maponya whose mall in Soweto is now famous. There were a few women, most notably Bertha Mkhize, tailor to the white community in Durban and also an ANC Women’s League activist and treason trialist in 1956.

Many schemes came to naught. Business projects based on mutual or self-help principles failed to flourish, for example the African and Indian Trading Association. T.D. Mweli Skota was associated with this as well as unsuccessful publishing enterprises. However, some of the most successful and well-known black businessmen were newspaper owners and editors such as John Tengo Jabavu (Imvo Zabantsundu, King William’s Town) and Solomon Plaatje (Tsale ea Becoana, Kimberley) and prominent names – Xiniwe again, Tyamzashe, Umhalla, Seme and Soga – emerge from this history. Perhaps predictably there was frequent overlap between business, politics and culture; cemented by a great deal of intermarriage. This also accounts for the bourgeois origins of the ANC.

As in other parts of colonial Africa, the transport industry often provided an entry point to wider business opportunities. Benefit societies dated from the 1870s, the African People’s Organisation ran a building society and the Congregational Church established a bank. Champion, with Selby Msimang among others, was one of those who advocated the setting up of financial services companies. This resulted in the Natal African Fund or Isikwama Sesizwe, which in the mid-1960s attracted the attentions of the police security branch. Perhaps the most successful financial institution was African Horizon Insurance Company associated with Z.K. Matthews and often mistaken for an ANC organisation.

D.D.T. Jabavu supported the black American concept of ‘keeping money within the colour’; in other words, racial self-help. While a worthy objective, this played into the hands of apartheid ideologues. And within organisations like the African Chamber of Commerce there were ruptures created by Africanism. Ndzamela is able to conclude that while the black business class in colonial and apartheid South Africa was small, it showed enough success to signal great potential. And this was stifled by discriminatory legislation driving socio-economic engineering based on race.