Maverick Africans: The Shaping of the Afrikaners

Hermann Giliomee, Maverick Africans: The Shaping of the Afrikaners (Tafelberg, 2020) 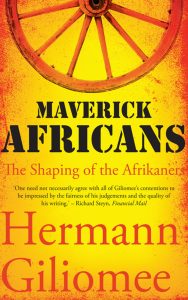 HERMANN Giliomee deploys the acute observation that nations are created not just from their own dynamics, but also by their enemies. He raises the question in a reader’s mind whether Afrikaner identity would have emerged without the arrogance of British imperialism, the abandonment of the bywoners and hensoppers after the Anglo-Boer War, and tensions created by two world wars. Given the disparate groups brought together as Afrikaners this is a good point. This book concentrates in particular on the influence of women, church and language.

Although they were deprived of the vote until 1930, and afterwards played a relatively low-key role in politics and government, Afrikaans women occupied a strong social and legal position, the latter because of inheritance law. After the racial mixing of the early years of the Cape, women used their power in home and farm to push for a devout, racially bound society. It was women who encouraged wavering bittereinders after the Anglo-Boer War, and then promoted welfare organisations.

The Great Trek is usually regarded as symbolic of the shaping of the Afrikaners: rugged individualism, cultural chauvinism and antipathy towards perceived British liberalism were notable factors. But frontier anarchy was the very antithesis of nation building, especially as land became scarce, egalitarianism evaporated, class divisions emerged, and poverty had to be transplanted – ultimately to urban areas. This was most apparent in the Transvaal, especially after gold mining and commercial agriculture found common cause before World War I.

Giliomee explains that there was no sudden awakening of the Afrikaners, but a slow and tortuous ideological project created from highly diverse sources, which was completed as late as the 1960s out of religious, political, class and geographic fracture. Indeed, it had been only from the early 1900s that the term Afrikaner attained unambiguous meaning.  Language, myth and religion played major parts, but class and ethnicity converged only under the white welfare state created out of apartheid. A lost sense of frontier egalitarianism was in part restored through education, self-improvement and economic upliftment.

The role of religion was central. Giliomee dismisses the influence of fascism on Afrikaner nationalism as minimal and makes persuasive comparisons with the American South. The Dutch Reformed Church had succumbed to racist pressure by the mid-nineteenth century and created a mission church (sendingkerk) that lacked autonomy. The term ‘apartheid’ emerged from the DRC in 1929 with a plan for separate, self-governing, self-financing and equal churches; and only later evolved into political doctrine. Giliomee describes a trinity of church, nationalism and apartheid. But whether the last would emerge as complete territorial separation or a group areas type urban segregation was decided only after Hendrik Verwoerd became prime minister.

Giliomee is no stranger to controversy and has the courage to argue that the Afrikaners ran a successful country with a high-quality, clean civil service. He tempers this by admitting that it was a modernised settler state in which a caste system was maintained by oppression. Ethno-nationalism is attractive to market and easy to mobilise. Apparently emotional and irrational, there are plenty of contemporary examples. The apartheid regime was prepared to adapt. John Vorster was the first leader to see himself as representing all whites, F.W. de Klerk as the man for all minorities, and both achieved some success. Afrikaner intellectuals had disowned the system from the 1960s on the grounds that it lacked justice. Eventually apartheid succumbed under the weight of its own internal contradictions.

Such is the main narrative of Giliomee’s book, but he also looks at narrower themes. One is the Bankorp (Absa) bail out, which averted a banking crisis and involved nothing particularly unusual. He rightly questions why this has become a recent ANC obsession so many years later. Another chapter looks at the career of Piet Cillié, editor of Die Burger; in particular as it related to geographic and ideological fractures in the National Party. Cillié was preoccupied with survival methods for small nations.

And finally, Giliomee considers the status of Afrikaans at Stellenbosch University. He believes that the university has betrayed the coloured community and compromised the future of Afrikaans culture. But he is nothing but realistic. The situation is a consequence of the self-interest of academics putting careers first; and he has the grace to admit that Stellenbosch University always sought to be close to the source of power.