Fortunes: The Rise and Rise of Afrikaner Tycoons 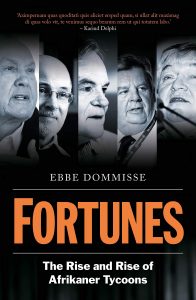 TWO dozen tycoons are the central characters of Ebbe Dommisse’s book; just one, unsurprisingly, a woman. Among these Afrikaans-speakers none is coloured. Most made their enormous fortunes in financial services, retail, and information technology; or as megaboere in vast agricultural enterprises. Based on interviews, Dommisse has assembled a collection of informative biographies, but the crucial question is whether any general conclusions can be drawn. The answer is probably not.

The author writes about lodestars of personal virtue who pulled themselves up by their bootstraps. He goes out of his way to dismiss Dan O’Meara’s materialist history of politically driven business and a welfare state, having recorded that after World War I commerce and the language issue were closely entwined. Some will question this absence of an Afrikaner developmental state and the apparent organic rise of restless entrepreneurs.

While businesspeople may avoid party politics, they inevitably play a political role. Jacobus (call me Koos) Bekker (Naspers), for instance insists that his decision-making is driven purely by the balance sheet. But Dommisse shows that while businesspeople have one-track minds, even a set of figures has political implications. Bekker, harbouring an enormous personal fortune and gigantic company assets, has helped destroy the local and provincial print media in South Africa and further weakened a fragile democracy. Presumably this is the oopkop (open-mindedness) of which Hendrik du Toit speaks. Bekker seems closer to Chinese communism than the ideals of the South African constitution, but perhaps this is the point. And in suppressing publication of a history of Naspers he readily engages in censorship. It would be tempting to see his guiding principle as maximum adaptability; except that he questions the very concept of principle. His view of philanthropy is cynical as he regards it simply in terms of job creation.

By comparison, Johann Rupert (Richmont) with his family background and somewhat old-fashioned approach looks positively benign. He once persuaded his father to set up the Small Business Development Corporation and now worries about unemployment and the destruction of the South African public education system. Strangely, he has been the main target of accusations of white monopoly capitalism (WMC) conjured up by British publicists Bell Pottinger, now happily defunct. Rupert’s threat to leave the country is serious given that he is its biggest taxpayer.

Christo Wiese (Pep) made his billions selling cut-price clothing to low-income communities using uncomplicated systems. He attributes success to an appetite for risk taking that he imbibed at home in his youth. Commentators have argued that he was known to sail close to the wind; so much so that he entered the eye of a hurricane as chairperson of Steinhoff International before the massive fraud perpetrated by Markus Jooste was exposed. Whitey Basson of Shoprite/Checkers is famous for buying OK Bazaars for R1 and for his ventures in Africa. He has tended to take a different line and has welcomed trade union engagement. He feels that the economy is hampered by over-bureaucratisation and most notably he avoided involvement in Steinhoff.

And so the roll call proceeds amid endless structuring of deals, asset swaps and financial arm wrestling. There is an obvious linguistics affinity and many backgrounds involve farming and the University of Stellenbosch. Otherwise, the life experience and advice offered, ranging from the banal to the profound, could come from any business practitioner. But then there is Jooste, the only subject who refused to co-operate with this author. His company was a shell, no more than an upper-class Ponzi scheme, and a product of the seduction of wealth. The fraud probably amounts to R300 billion over seven years. Jooste was an expert in tax evasion, a many-faced bully and intimidator, male chauvinist, master conman and corporate psychopath who glorified extravagance. He was the world’s second largest racehorse owner after the ruler of Dubai and used rugby sponsorship to feed his ego. He believed in shares, not salaries; in retrospect for good reason. And not long before Steinhoff’s collapse he was talking about trust. But what is astounding is that Steinhoff had two boards teeming with accountants, many businessmen (including some in this book) invested lavishly in the company, and asset managers traded in its shares. Yet no one raised a large enough red flag in time.

Dommisse also deals with the megaboere. Using modern, highly sophisticated information technology that overcomes a variety of challenges they run gigantic farms with international footprints. Such is the growth in the size of farms that South Africa is now a major exporter of farmers, part of a broader brain drain; but where this fits with government land policy remains unanswered.

The author does raise the question of wealth concentration and makes the usual case against redistribution. A chapter entitled ‘Rainmakers’ applauds innovators and entrepreneurs reinforcing the argument that humankind’s greatest asset is what resides between people’s ears. Dommisse concludes, as others have no doubt correctly done, that there is no Stellenbosch mafia despite overlapping backgrounds and connections. But his surprise at the success of Afrikaner businessmen since 1994 is in itself a surprise since, despite noisy rhetoric, there is so much in common between African and Afrikaner nationalism and capitalism.

From this expansive account of big businessmen there is a notable absence: the workers, the people who made the wealth that is traded by the rich and powerful. The latter we read are the visionaries and risk takers who generate progress. Indeed, but they have prospered through the extraction of surplus wealth throughout the employment chain. For all the upbeat spin, ultimately the creation of vast personal wealth is based on exploitation.