Confessions of a Stratcom Hitman 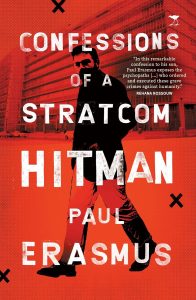 THERE was no so-called third force: the propaganda, dirty tricks and orchestrated violence of the transition to democracy were part of Stratcom, a project that had full knowledge and approval of the National Party (NP) government. This is the case presented by former police special branch (SB) warrant officer and Stratcom operative Paul Erasmus. Stratcom was designed to prolong NP rule, disrupt the ANC, and influence foreign opinion; and its origins in the mid-1980s seem to lie with British and American theory peddled by right-wing outfits about winning hearts and minds. Supposedly wound up in 1991, it carried on for several years.

Erasmus joined the SB at the age of 20 because he believed it was more ‘intellectual’ than the uniform branch. This could not have been more misguided. After years working from the ninth floor of John Vorster Square police station in Johannesburg, and an interlude with Koevoet, he was ‘unable to contain … the numerous crimes and cruelties that we perpetrated on behalf of apartheid’ (159). He has relatively little to say about Namibia, suggesting that the details are too awful to record even in what is intended as a confession to his deaf son. His epiphany seems to have occurred when a family advocate, whom he had detained and racially denigrated as a student activist, awarded him custody of his son.

He died last July in his mid-60s and has become one of very few former members of the SB not to take all his secrets to the grave. Having been boarded from Mossel Bay SB in May 1993, he spoke to the Goldstone Commission and the Truth and Reconciliation Commission and much later to the reconvened Timol and Aggett inquests. The threat level was so great that he with a few other SB officers testified to Goldstone in Britain and Denmark. Then he and his family were put into witness protection, although this proved futile when their Cowies Hill house was attacked. Nevertheless, one has to retain a modicum of scepticism given that Erasmus spent a working life in deception and fabrication. His narrative zig-zags all over the place, but retains sufficient coherence to reflect a chaotic, self-destructive life. And while we know a great deal about the world view and working methods of the SB from victims’ accounts, Erasmus provides a valuable insider account; an obverse view.

He claims that the SB’s intelligence files were so massive that there was concern the ninth floor might give way under their weight. Their value was, however, questionable and he admits that detention and interrogation were often fishing expeditions. Erasmus spent his career pursuing white opponents of the apartheid regime, who were in later years to include right-wingers. Persecution is a more apt description; making life so miserable as to force targets into exile. He has no new insights into the murder of Rick Turner except to note that the Durban SB was particularly violent.

The SB nationally was run by hard, brutal men with neo-fascist inclinations who unleashed on the population a group of hooligans and misfits capable of virtually any type of delinquent behaviour in the name of Western, Christian civilisation. Erasmus perceptively describes this as akin to jihad. Courses run for SB officers justified security legislation in biblical terms, yet much of this psychopathic lifestyle was fuelled by ‘alcohol-driven euphoria’. (Erasmus links South African Breweries directly to war crimes in Namibia.) Prominent among the officers is Arthur Benoni Cronwright, whose name is synonymous with the death of Neil Aggett.

Cronwright was a man of ‘explosive fanaticism’. Erasmus on a surveillance mission caught him at a meeting of the neo-fascist South African National Front, which had been founded by extremists from Britain. He was then assaulted by an apparently deranged Cronwright in the presence of other SB members. Cronwright, he suggests, may have been directly implicated in the murder of Ahmed Timol back in 1971.

Erasmus is a writer who favours the frequent side track. He points out that at the Soweto uprising of 1976 the police had insufficient shotguns and so resorted to R1 assault rifles, battlefield weapons. A drunk officer ordered use of teargas against a crowd, but misread the wind and teargassed his own men. Many police officers were members of the AWB. And Erasmus has scathing words for what he calls ‘plastic policemen’ like Leon Mellet and Naas Botha. The whole force was riven by personal rivalry and jealousy. It was also highly corrupt with gun running a lucrative sideline and many fraud, blackmail and extortion rackets.

By the time he came to testify before the TRC, Erasmus could list over 500 criminal offences in 80 incidents for which he was answerable, the cause of prolonged personal breakdown that destroyed his family. He targeted any individual or organisation from what was perceived as the white left with a range of dirty tricks ranging from the outright childish to the lethal: from CS gas in ventilation systems to electric shocks (known as Radio Moscow). Describing these activities later as ‘acts of spitefulness … futile and amateurish’ he links failure to an increase in brutality. One of his targets was Roger Lucey, whose music he admired and whom he later befriended. (Is it a coincidence that the covers of their autobiographies bear striking similarities?) John Robbie of Radio 702 was an assassination target, but survived through good fortune. Foot soldiers like Erasmus were given orders to eliminate named individuals, sometimes fellow police officers, and many of its operations were false flagged. One of the most flagrant and destructive was the assault on COSATU House in 1986.

One of Erasmus’s prime targets was Winnie Madikizela-Mandela with whom he was to reconcile and, apparently, befriend. Yet even this retreaded Erasmus was a magnet for trouble. He became involved in alternative cures for HIV/Aids and accompanied Madikizela-Mandela in an embarrassing trip to Kenya to investigate a bogus treatment called oxytherapy.

There are several errors in this book. For instance, the racist British politician Enoch Powell was never a member of the National Front, although he was later close to UKIP. And the Trust Feed (not Feeds) massacre of 1988 took place near New Hanover (not Hanover) in Natal. Nevertheless, it is a valuable contribution to the historiography of apartheid South Africa confirming from inside the well-documented experiences of victims. Like many of the foot soldiers of the apartheid regime, Erasmus came from a dysfunctional background, and was wide open to recruitment and influence by evil people. He leaves an important record about whose completeness we can only speculate. But given that Erasmus was clearly an intelligent and resourceful person, what is beyond doubt is that he wasted his life in a doomed cause.