Clare: The Killing of a Gentle Activist 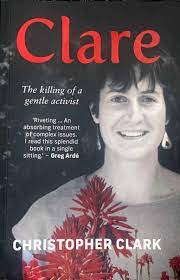 THERE is a myth that still circulates out there, one of legions about South Africa’s history: that the transition from apartheid to democracy was largely peaceful. This is what the world wanted to believe, fuelled by the fact that the race war expected by those who had little understanding of South Africa had been averted. But hundreds of people died during the years 1990 to 1994. One of them was an agricultural project director called Clare Stewart, who was murdered on 10 November 1993.

She was hijacked at Manguzi near Kosi Bay and her bakkie was retrieved the same day in Empangeni. Its driver disappeared. Twelve days later her decomposing body was found not far from the main road from Manguzi to the Mozambique border. The police reaction was lethargic and public interest soon abated after the initial shock: those were febrile, complicated times. But the Truth and Reconciliation Commission thought the case was important enough to follow up and appointed two investigators. They came to no hard conclusions, but compiled a list of over twenty possible suspects.

There the matter rested until revived by a British journalist, Christopher Clark, who specialised in some of South Africa’s neglected stories. With remarkable tenaciousness he tracked down the Stewart family, including the two children of the victim, and then a succession of people who had been involved in some way with the events of a quarter of a century before. He has been assiduous in visiting the places in the Free State and KwaZulu-Natal where Stewart had lived and worked before landing up at the Masivele Kwatembe Nguni Co-operative. There she had been an outstanding success through her ability to integrate socially and linguistically, and her high level of professionalism. Clark is especially strong on descriptions of people and places and his writing has a strong sense of authenticity.

But at the end of this impressive exercise in journalistic research lasting four years, Clark gets no closer to solving the murder and resorts to the high probability aired back in 1993: that the perpetrators were linked to Inkatha and the police security branch. Gideon Zulu had openly called for the elimination of those working with the ANC and one of the facts uncovered by Clark is that Stewart had been recruited into Umkhonto we Sizwe, reputedly by Ronnie Kasrils. It is possible that she was involved in courier work or surveillance. In an area of high instability just prior to the first democratic elections, which Inkatha initially boycotted, she was a target even if her involvement was low-level. Other motives ‒ personal animosity or disagreements within the co-operative ‒ are correctly discounted for lack of any hard evidence. Clark has subjected a cold case to intense scrutiny, warming it a little, but it is doubtful if the truth will ever be fully exposed.

Some of the writing in this book seems circuitous. For example, why bring up the violence between the ANC and the United Democratic Movement in Richmond, many kilometres from Manguzi, at the turn of the century? But Clark is correct to do so to highlight the conflict that is part of the regional DNA. Much of the violence that appears to have a contemporary political motive is deeply rooted in historical factors and resurfaces, freshly labelled. The killing of Stewart might conceivably have more complex origins than meet the eye.

A large part of this book deals with the author’s relationships with members of the Stewart family and in particular Clare Stewart’s two children, Themba and Puleng. Their stories add substantially to an understanding of who Stewart was and her character and motivation. But Clark also inserts a great deal of himself into the book going so far as to speculate that he shared certain of Stewart’s characteristics. Blending of subject and writer has become very fashionable even in academic circles in recent times, but some readers might find this distracting.

Clark refers to general disillusionment with contemporary South Africa, which makes this biography particularly relevant. Stewart had a peripatetic adolescence in a progressive Roman Catholic family and returning to her father’s country in the 1980s was a member, a particularly striking one, of a substantial number of whites who in various ways sought to promote a non-racial society. They were characterised by energy, determination and hope. Ask an opinion of those still living in South Africa today and the responses will be mixed. The realistic will admit that the dream started to disintegrate many years ago, earlier than most were prepared to admit at the time.

Reading this impressive book, one is tempted to wonder whether the unsolved murder of Clare Stewart was not a portent.