Black Beach: 491 Days in one of Africa’s Most Brutal Prisons 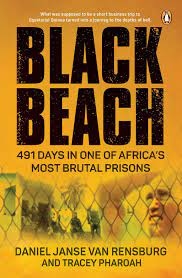 THE TITLE of this book is explicit enough, but its broader significance lies in what it suggests about societies that have scant regard for the rule of law. Given the global trend towards illiberalism, the dangers of throwing away what are increasingly derided as obstacles inherited from Western liberalism (for example judicial integrity and habeas corpus) need to be thoroughly appreciated. This book is a stark reminder of the danger represented by noisy South Africans who disrespect the constitution and attack the courts and judiciary as un-African.

Daniel Janse van Rensburg is a South African-based entrepreneur and business consultant who has worked across Africa. Having grown up in Zimbabwe, Namibia and Angola he regarded himself as a white African. It is unclear whether he still does after his Equatorial Guinea experience. One of his projects involved setting up an airline there that subsequently failed. In 2013 he was back in Malabo (Fernando Po during the days of Spanish colonialism) to create a successor, Coriscair, and in October he went on a five-day business trip to consult his client, one Angabi. It turned into a nightmare lasting nearly two years.

Early in this book Janse van Rensburg argues that Africa marches to its own rhythm and is highly entrepreneurial. Westerners, he says, are too patronising and lack understanding of the complexity of what they term corruption. This has a certain validity. But the author learned more about that rhythm when his employer accused him of theft, ordered his arrest, and arranged for him to be punished in the ‘African way’. That same day he witnessed torture at Guantanamo, the Malabo police headquarters, although he was not physically assaulted.

There is no explanation for this business fallout, except that Angabi demanded his money back – all $200 000 of it. Janse van Rensburg provides plentiful evidence that everything about his business dealings were above board and lawful and he was entirely innocent. Presumably someone in Equatorial Guinea’s notoriously vicious, nepotistic and corrupt regime – bolstered by oil – was leaning on Angabi. And the Western Cape High Court recently awarded massive damages for illegal imprisonment against Teodorin Obiang, Equatorial Guinea’s vice-president.

The author suggests that he had known Angabi on a personal as well as a business level for some years. It is therefore surprising that he had not spotted that he was a manipulative madman without moral scruple. Angabi vowed that Janse van Rensburg would never leave Malabo; and the latter writes that he felt as if he were part of a spy thriller ‘except that no one bothered to give me a copy of the script’. His story reads like a revolving door: twice held at Guantanamo; twice incarcerated at Black Beach prison; thrice released by a judge; and free only at his third attempt to fly out. In between he had several experiences of being hunted on the streets by thugs intent on kidnap or murder.

It is an extraordinary tale but no great surprise to anyone with knowledge of the post-colonial history of Equatorial Guinea, which is well-documented. Its police are clearly a brutal, predatory and corrupt rabble working to the orders of a ruling elite of gangsters. This is a feudal state that knows nothing of human rights; only malice, hatred, greed and abuse of power everywhere.

The South African embassy and staff emerge well from Janse van Rensburg’s account providing shelter, some security and as much assistance as they could. One official even threatened gunboat diplomacy in a curious historical throwback; and she finally saw Janse van Rensburg seated on a plane to freedom. But when he first attempted to leave and was kidnapped from the tarmac an embassy official was assaulted. There is no mention of any repercussions. And perhaps a moment of greatest despair occurred when another embassy employee took Janse van Rensburg’s fingerprints at a court – in case his body had to be identified at the morgue. Janse van Rensburg was not only innocent, but honourable. Having promised the ambassador that he would not try to leave the country illegally, he turned down three escape offers – one by air, two by boat.

Black Beach, close to the presidential palace, is one of the world’s most notorious prisons and known as the ‘Auschwitz of Africa’. It houses people convicted of heinous crimes such as muti murder but also teenagers accused of stealing mangoes. Above all it is place where people disappear, as it seems was the intention in the case of Janse van Rensburg. He describes it as a ‘savage universe of desperation and anguish’; a place the size of a football field housing four hundred prisoners. The food and water are poisonous; the sanitary facilities murderous; the smell and noise unbearable; and the dangers multiple. Sleep was limited and risky. But Janse van Rensburg did not suffer nightmares; he was living through one. Each day required drawing on all his survival resources. It was a ‘dark and wretched place’ that bred ‘hatred and rage’. This was cynically exploited by officials who imported alcohol that caused a vicious Christmas riot.

Janse van Rensburg attributes his survival to faith. But in spite of the predators, he found some decency and even groups of practising Christians and Muslims. Thus, he managed to overcome cerebral malarial, typhoid and dysentery while suffering starvation. Horrors aside, the reader is left with the impression that those who deserve Black Beach are the governing elite and their acolytes and enforcers. Janse van Rensburg’s first release was due to a clerical error (somehow, he appeared on a court appearance list) and the lucky loan of a warder’s cellphone (on his way to court).

A judge ordered his release and there followed a period of relative freedom. An earlier court case had already ruled that he had committed no crime and was free to leave. These were moments of hope that suggested glimmers of the rule of law, presumably remnants of Spanish colonial rule. But even when free and able to communicate with his family, he led the unstable life of a fugitive. And eventually a corrupt judge had him sent back to Black Beach. This time he was better prepared.

This was a far longer stint at Black Beach and although better resourced and supported locally, the South African government appears to have abandoned him and there was no official record that he was in prison. He resumed his primitive exercise regime accompanied by much suspicion from the guards, carved out slightly more inhabitable space, taught English, and even unofficially adopted a young prisoner. But he maintained acute wariness, looking for anything unusual in a place in which everything was out of the ordinary.

His rescue came via another inmate, a Spanish fraudster he assisted, who on his release arranged for legal representation at a price. Yet another judge freed him, but Angabi had not given up. Another airport kidnap was foiled and led to a car chase back to the embassy, which was briefly besieged. Exit from the nightmare was a matter of third time lucky.

The reader will recognise Janse van Rensburg’s personal resilience, belief in his innocence and resourcefulness. He attributes survival to his overwhelming desire to reunite with his family and to God. There is no doubt these were very powerful and consistent factors. But editorially they are handled in a repetitious manner that interrupts the narrative and even becomes irritating.

Asked by a reporter on his arrival home if he might revisit Equatorial Guinea, he responded that it was possible but doubted if his wife would allow it. Presumably this was said in jest.