An Historian’s Passage to Africa: An Autobiography 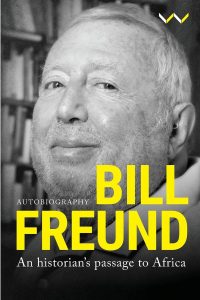 WHAT were the chances of an economic historian from Chicago finding the happiest days of a somewhat unsettled life in Durban? Yet this was the story of Bill Freund who was a distinguished academic on the staff on the Howard College campus of the University of KwaZulu-Natal for over twenty years. Ironically, and sadly, he died in 2020 in his mid-70s in the aftermath of a mugging on the way to the shops near his home.

Three main themes emerge from his autobiography, published posthumously: his central European Jewish ancestry; his search for a settled and meaningful life; and his intellectual development. Many of his relatives were from Vienna at the height of its imperial glory, although some had come from further afield in the Austro-Hungarian Empire. At the time of Anschluss his extended family was split three ways. Those who were quick off the mark found safety in the United States or Britain; those who were not, perished in the Holocaust. His ill-matched parents were to meet, and live the rest of their lives, in Chicago.

Freund’s childhood was seemingly humdrum, but there was clearly a conflict between his mental and physical development. The latter did not measure up to the norms of American manhood and he dwells at length on his self-perceived timidity. It is difficult to know exactly what to make of this because he was confident and intellectually robust enough to be determined to make his way in the often-bruising world of academia.

In spite of his qualifications, Freund failed to find a tenured post in higher education in the USA. This was perhaps fortuitous as he consequently taught in Nigeria and Tanzania, out of which developed his track record as one of the foremost historians of the African continent; a writer capable of a comprehensive, balanced and magisterial sweep. Exposure to the work and company of left-wing British Africanists led to growing Anglophilia and estrangement from his American background and his demanding mother, although he did make peace with his father.

From the mid-1980s Freund became a respected and well-known figure in the English-speaking universities of South Africa in the areas of economic history and development studies. In Durban he found the home and social life he had craved, which included the famous campus touch rugby competition, but like so many communities of like-minded and committed people it was not to last and had largely evaporated by the time he retired in 2009. In spite of his left-wing leanings he was not a political activist, fearing that he might be deported; although he was involved with the trade unions. He was broadly sympathetic to the ANC and is generous in his assessment of its achievements since 1994.

As a person who lived a cerebral life, Freund was a traditionalist in his attitude towards higher education and lamented the extent to which university degrees were used in South Africa as tickets to employment. Ideas were the driving force of his life and he defended them ably in print and person as an independent thinker. This may well account for being overlooked for the legions of jobs for which he applied. Universities often fail to appoint the best people if applicants are outside the mainstream; and are generally more conformist than they might want to admit.

Like many academics of his era in the humanities and social sciences, Freund used Marxist analysis to frame and answer his questions about African economic history. But he was far from doctrinaire and his personal political outlook was that of a social democrat who believed that capitalism needed to be moulded to create a just society.

Given the sudden tragedy that marked his final days it is tempting to imagine that Freund might have added to what feels like an incomplete life history. His ancestral background and early life are well covered, but the South African years – his most significant – are sketchy by comparison. Far more is written about the bumpy journey than the happy destination. In particular there is too little about the Howard College campus and the university as a whole, which was going through a turbulent time. His readers would have benefited greatly from further acute and critical outside observation. Inadvertently, a chance has been lost here to add to the history of the province’s main university.