All Rise: Resistance and Rebellion in South Africa, 1910‒1948: A Graphic History 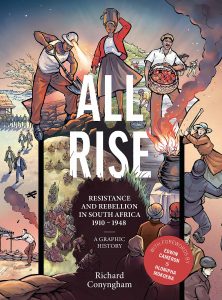 THIS illustrated history is largely inspired by files found in the basement archives of the Supreme Court of Appeal in Bloemfontein and covers six cases of struggle against oppressive authority, although one of them did not involve legal proceedings. In Richard Conyngham’s words they represent ‘faded worlds’, the subaltern experience rarely documented in published works. In most cases individuals rose suddenly out of obscurity and disappeared back into it without further trace.

The six stories involve the rights of Indians in the Transvaal and the Johannesburg transport strike (1911) prior to the Great War; the Rand Revolt (1922), introduction of night passes for women (1925), and intra-communal conflict among the Bafokeng in the 1920s; and the African mine workers’ strike of 1946. Each story is told by a graphic artist, then backed up by text and illustrative material ‒ documents and photographs. In some cases, newspaper records ‒ Indian Opinion, Rand Daily Mail and the Star ‒ provided a rich source of material; but in others there was little more than a thin layer of official correspondence.

Edwin Cameron points out that the artwork, produced by seven illustrators, bridges the words and photographs in the book. This approach is at its most effective when reviving the likely worlds and words of obscure people, but perhaps less so when it comes to famous figures such as Mohandas Gandhi and Jan Smuts. While these are stories about confronting or breaking unjust law, Cameron emphasises that even under Union rule courts could produce just outcomes. The other foreword writer, Hlonipha Mokoena, portrays the law as refuge and promotes our current constitution as a document of rights, obligations and moral values.

Indian residents of the Transvaal turned to non-violent resistance, satyagraha, by burning passes and opposing registration. The ultimate sanction was deportation back to India under appalling conditions. The case of the right of a minor to stay was, however, won. Before and after the Great War militant trade unionism was promoted by whites and included various colourful characters such as Mary (Pickhandle) Fitzgerald, editor of the Voice of Labour. One striker was framed for possession of explosives and detained in primitive conditions at the Fort in Johannesburg. He later successfully sued and was awarded significant damages.

In 1922 striking mineworkers, some of them former Great War combatants, formed commandos and started an insurrection at Fordsburg against the Randlords and the Chamber of Mines. The uprising was put down by aerial bombing, artillery and infantry, the loss of 250 lives and 844 arrests. This episode has elements of high drama: two of the leaders shot themselves. Jury trials were suspended and there are major questions over the prosecution and its evidence. A retrial led to the conviction of Taffy Long for murder and even though the judges urged clemency, political pressure resulted in his execution.

Opposition to night passes involved Charlotte Maxeke, but the Appeal Court case concerning volunteers for arrest at Marabastad named just one convicted person: Helena Detody. In 1926 a favourable verdict was delivered and she disappeared back into anonymity with a misspelt name left to posterity (it was probably Ditodi). This story is written around a thin case folder, a department of native affairs archival file, and an Es’kia Mphahlele novel.

The fifth story reflects dissent among the Bafokeng against the actions of a corrupt, alcoholic chief who broke a consumer boycott after a failed farm purchase. African customary law was uncodified in the Transvaal, so government officials were the ultimate authority. Their attempts to impose location orders were ruled ultra vires, so the rebel lekgotla continued its campaign. The eventual removal of nine leaders was challenged in court where Sol Plaatje gave evidence. Two white judges were the eventual arbiters of African tradition, ruled in favour of the chief and endorsed the banishment that would be legalised by the notorious Native Administration Act of 1927.

The final episode concerns the black mineworkers’ strike of 1946 as seen through the eyes of a Sotho migrant. Institutionalised violence and growing militancy drew in J.B. Marks and the African Mine Workers Union. Meetings on mine property were outlawed and the strike for a wage of ten shillings a day was met by extremely violent police action.

The title of this book is somewhat surprising; identical to the second volume of Dikgang Moseneke’s autobiography published by Picador Africa in 2020. Its major achievement is to rescue forgotten episodes of resistance to authority and reflect on how the law was used and abused. Most of these stories involve migrants and the work of Conyngham and a team of illustrators has now immortalised forgotten members of the South African working class who achieved fleeting fame. South Africans have a poor grasp of their history: this volume should bring a part of it to a wider audience and its graphic approach must contain high potential as a teaching aid.