A Life in Letters: Selected Correspondence of Denis Hurley 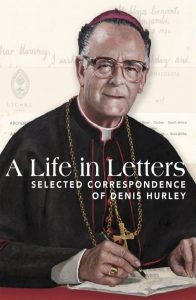 APARTHEID South Africa produced a remarkable number of outstanding church leaders: Desmond Tutu, Allan Boesak, Beyers Naudé, Manas Buthelezi and Peter Storey spring to mind; and this list must also include Denis Hurley, arguably the most significant Roman Catholic figure in the nation’s history. His father, until 1929, was a lighthouse keeper (Robben Island included) and many writers have used the symbolism of the beacon to summarise Hurley’s life: his friend Alan Paton is credited as originator of the phrase ‘guardian of the light’. His connections with Pietermaritzburg are strong: the family lived at 383 Prince Alfred Street, Hurley attended St Charles, and in the 1940s he was in charge of the Oblate Scholasticate in Prestbury.

In his teens he had moved to Ireland, birthplace of his parents, to commence his training as a priest. Then he moved to Rome, to the Angelicum and Gregorian where he was a near contemporary of Oscar Romero, who would become the martyred Salvadoran bishop. Rome he regarded as pagan city. He experienced Italian fascism at its height and described it correctly, if inadequately, as childish: holidays, marching, cheering and music; ‘banging and shouting’, although the ‘Fascists have not yet got control of the elements’. At the same time Spain’s Franco was a hero to him after Republicans had murdered priests. Hurley took some years to resolve this political ambiguity and as late as 1956 he was unable to support the Treason Trial Defence Fund.

Ordained in 1939, he returned to South Africa in 1940 as World War II broke out in earnest. By 1946 he was the youngest bishop (of Durban) in the world, although not to the acclaim of all. Later, he thought he may have been fifteen years too young at 31. When he handed over to Wilfrid Napier in 1992 he was the longest serving; and then for another nine years he was parish priest at Emmanuel Cathedral where he had once been a young curate, a remarkable example of a back-to-front career and one of multiple anniversaries. He died suddenly in February 2004, never having been made a cardinal.

The likely reason lies in the defining event of his religious life, the Second Vatican Council (1962–5). Although initially sceptical, his participation was committed and energetic, in general sympathy with progressive European Catholics who were concerned about the church in the world, not the church above it, and attempts to break the conservative stranglehold. The aims were improved governance by emphasising collegiality over primacy; a more relaxed attitude to birth control; and non-literal translation of the liturgy into the vernacular. Much progress was apparently made, but subsequently undermined by demands for unity around very limited change. Courageously, Hurley tackled Pope Paul VI expressing his disappointment over Humanae Vitae. The condescending response, making free use of the royal ‘We’, admonished Hurley for lack of respect and invoked special supernatural assistance. Hurley’s view was that this had proved all too fallible in the past.

Confrontation was never Hurley’s style and his reply was conciliatory. That he was a progressive Catholic is clear from these letters: he was an early supporter of women’s ordination (‘but don’t tell the Pope’) and towards the end of his life he was aghast at obstruction of the work of the International Commission on English in the Liturgy, which he chaired for 16 years, by ultra-conservative elements in Rome: formal equivalence was back in place of contemporary language. With prescience he suggested popes should retire.

Hurley openly slated apartheid as morally indefensible and in 1967 described it as ‘intrinsically evil’, but for many years he received scant support from fellow bishops or the laity. An early antagonist was Bishop Whelan of Bloemfontein. Rome, represented by the Apostolic Delegate, was keen not to upset the National Party government and exacerbate its roomse gevaar propaganda. There were fears about the deportation of priests and takeover of Catholic schools. Hurley’s anti-apartheid involvement ranged from defence of 300 church schools and engaged interest in black trade unionism to support for conscientious objectors and participation in peace efforts around the Natal civil war. To the consternation of the reactionary, out-of-touch overseas hierarchy he was for two terms president of the South African Institute of Race Relations for whom he delivered a Hoernlé lecture entitled ‘Apartheid: a crisis of Christian conscience’.

Hurley moved between very the different worlds of Rome and its formalism and the internal liberation movement of protest stands, witness to forced removal, and support for political detainees. In a letter to Alan Paton he appeared to support the sports boycott. During the bitter Sarmcol strike at Howick during the mid-1980s he made church land available for a co-operative project. As early as 1972 he had argued that the time for speeches and statements was past and that action and example were now required. In 1976 he wrote that the churches were still ‘too hesitant and inarticulate and, possibly, uncomprehrending’. He put much effort into ecumenical affairs and by the 1980s had persuaded the church to support him generally, although he still suffered hate mail and a bomb attack at his residence. It is thought that the government, which feared powerful unifying figures like Hurley, may have considered banning him, most likely for his opposition to conscription.

His participation in the anti-apartheid movement was complicated by ambivalence over economic sanctions and an unsurprising and uncompromising opposition to communism. There was the famous occasion of his refusal in September 1989 to march in the presence of the South African Communist Party flag. He could be admirably insightful about politics, regarding the 1994 elections in KwaZulu-Natal as fraudulent and rejecting the idea that their last minute salvage was a ‘miracle achieved by prayer’. He went so far as to write that ‘It is just a pity that [Buthelezi] created Inkatha’. In fact Buthelezi had revived it, but Hurley’s forecast that it would wither proved to be one of his less perceptive forecasts. His view that South Africa’s political transition was peaceful was likewise misguided.

His political involvement, which he forthrightly defended against accusations of partisanship from within the church as promotion of Christian ethics, led to two landmark legal cases. In 1981 he had testified on behalf of the South African Council of Churches before the Eloff Commission and earned the gratitude of Tutu. In 1984 his public comments about the conduct of Koevoet in Namibia led to prosecution under the Police Act. He was on remand for a year and his letters revealed considerable sangfroid, but this was no light matter and he could have ended up in prison. The case was withdrawn and two years later there was compensation for malicious prosecution. His correspondence reveals moral support from Donal Lamont, similarly persecuted by the Rhodesian government. In 1985 he was again in court, this time over the detention of Paddy Kearney of Diakonia under s.29 of the Internal Security Act. This allowed for indefinite detention for interrogation, but Judge Ramon Leon ruled that this draconian measure was subject to objective reason, not the sheer whim of any senior police officer. It was a significant victory against a vicious police state.

Collected letters are not the easiest medium for the reader, but carefully chosen they can reveal much about the private person behind a public façade. For example, this collection of 251 (from a massive archive of 5 000 now consolidated at St Joseph’s, although some correspondence surprisingly remains in family hands) reveals Hurley’s lifelong interest in rugby and cricket. The first letter was written when he was 11; the last was emailed after his death. He described Henri Derouet as a ‘lovable man – just what a bishop should be’ and on the evidence of these letters and much else lived out this belief throughout his career. Clearly he enjoyed and employed letter writing as a form of ministry and some of his correspondence reveals a keen sense of humour.

Hurley’s time as bishop neatly bracketed the 45 years of apartheid. Yet much of what he advocated – he was a supporter of the Reconstruction and Development Programme and a mild critic of capitalism – has yet to be fulfilled. And his high hopes of Vatican II are far from realised.

But these letters, neatly summarising his life and work, show him to be a figure of enduring significance. It may seem far-fetched to ask the question; but was Hurley a revolutionary? The true revolutionary often turns out to be not the firebrand orator but the principled and understated conservative who quietly plugs away at a radical agenda. And by that measure, Hurley was indeed a revolutionary.